The Intercontinental Cup. Nacional vs PSV Eindhoven. Tradition supported Nacional, classy names – the Dutch, who were not just full of fresh European champions, but also had Belgian, Dannish, and newly acquired Brazilian stars. It looked like David (De Leon) against Goliath (Van Breukelen, Gerets, Ronald Koeman, Heintze, Lerby, van Aerle, Vanenburg, Romario, and Kieft). The weather was supportive, unlike the snow blizzard of the previous year. 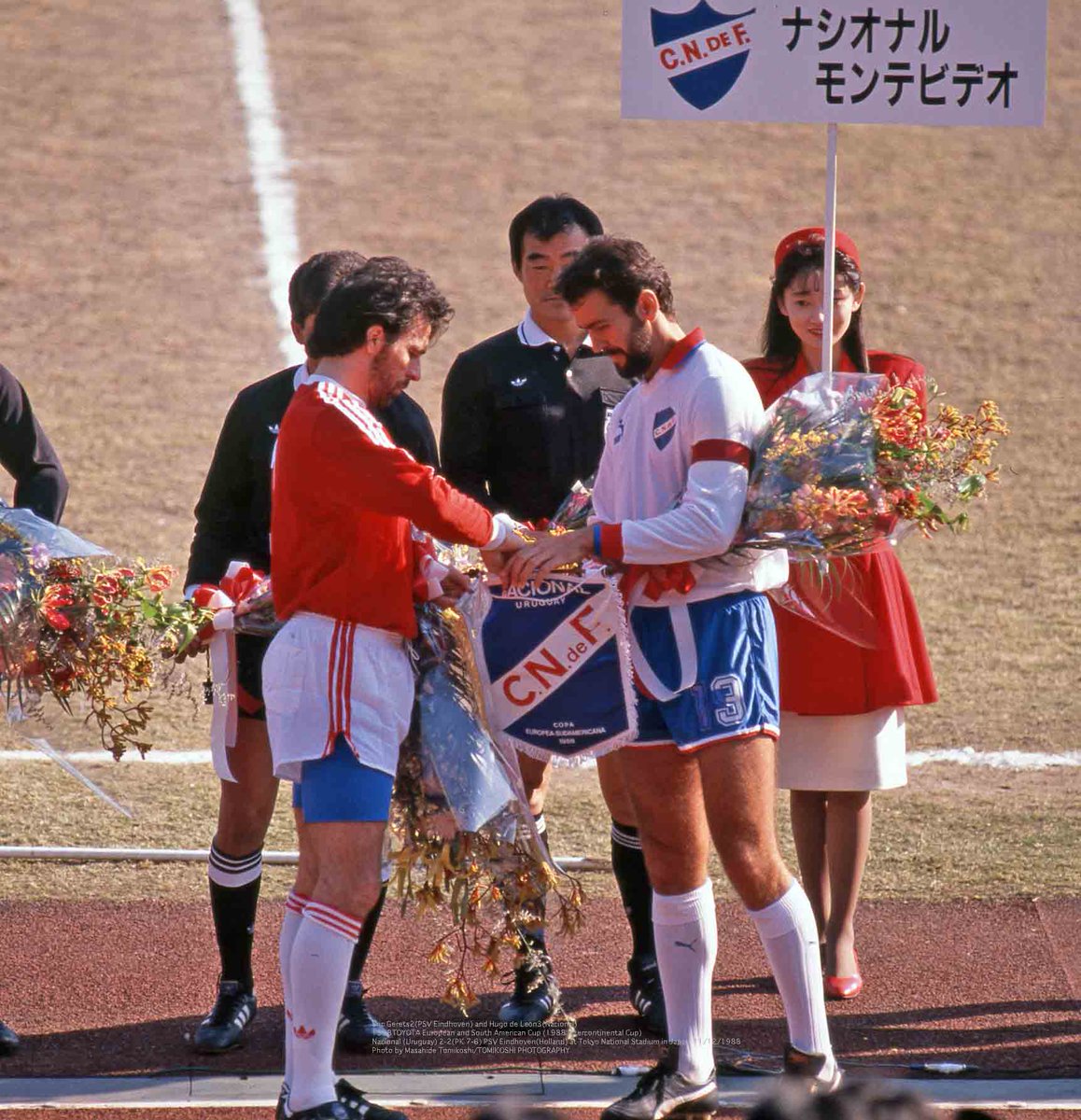 Captains Gerets and De Leon in the still peaceful moment before the start of the match. 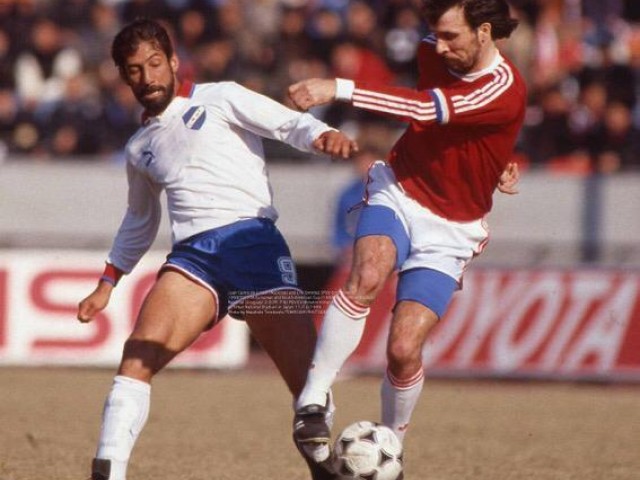 Then the battle went in earnest. 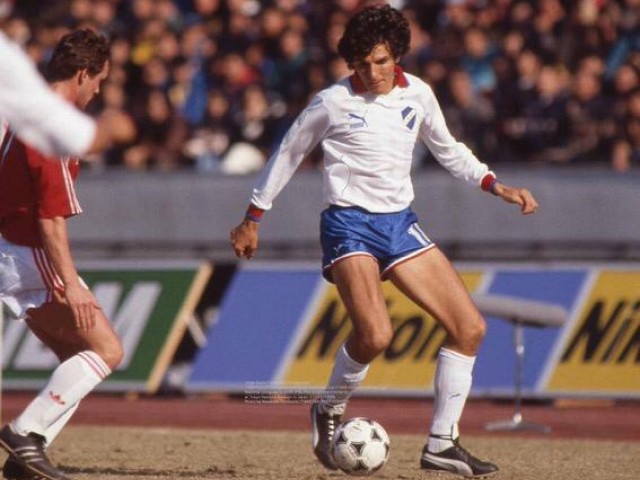 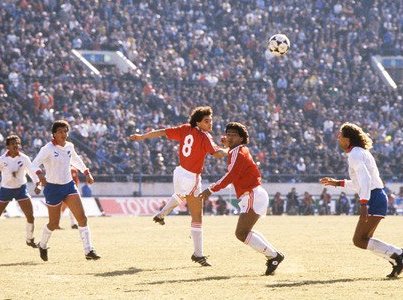 The game progressed with different success. 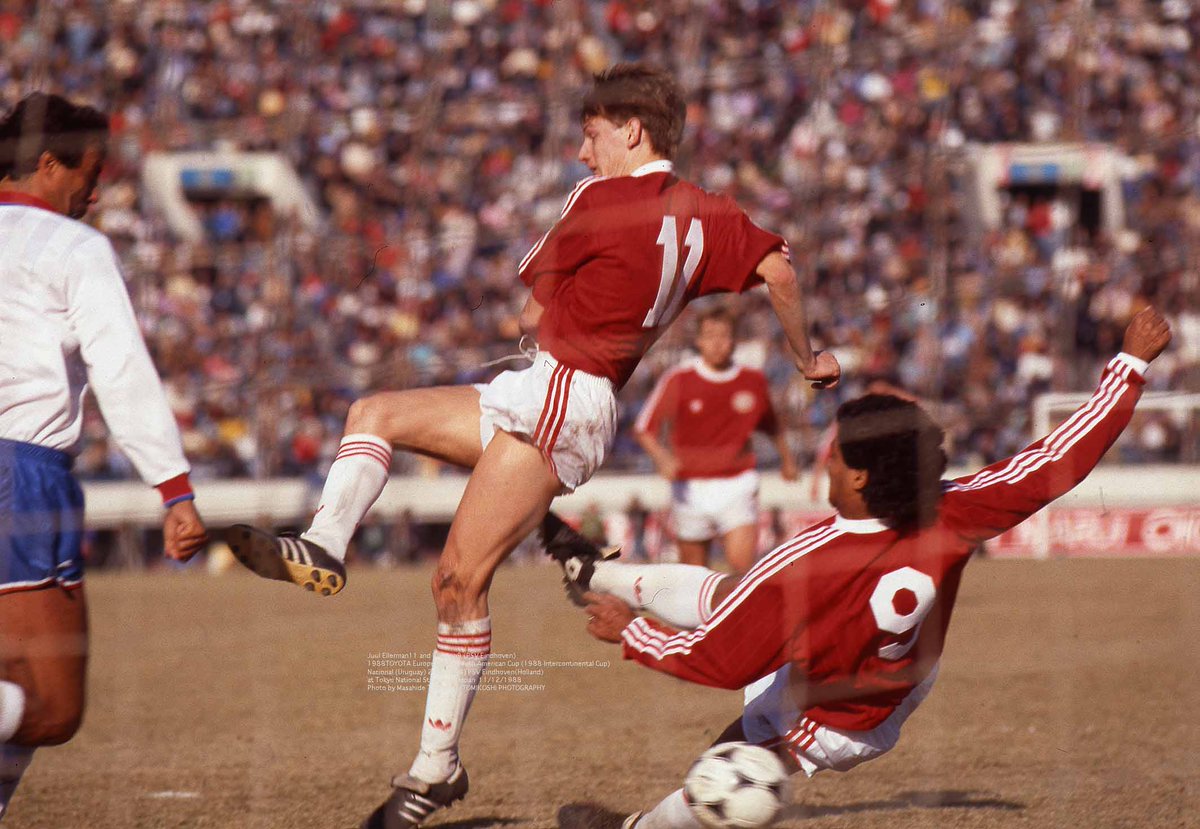 Who missed the ball – strikers failing to reach it and score or strikers in defense, failing to deflect a deadly kick? 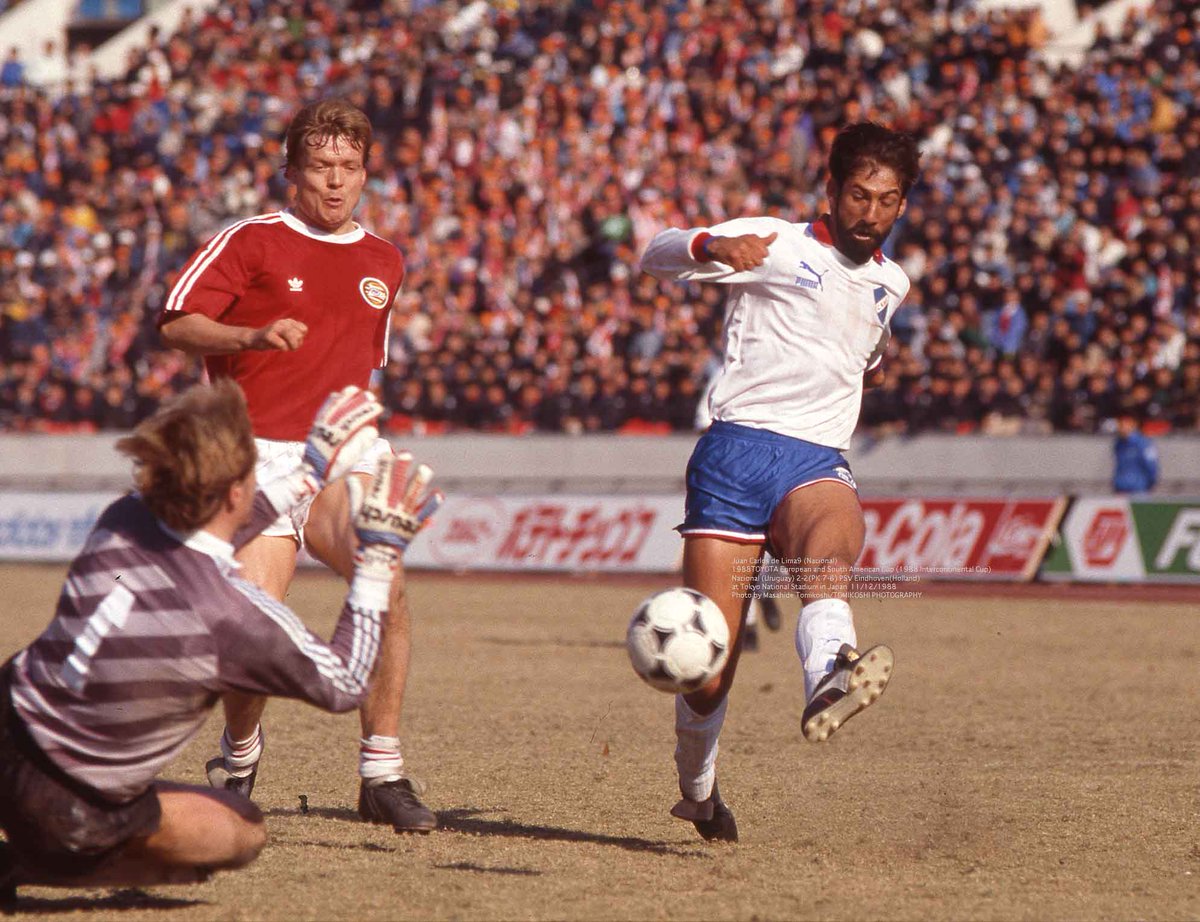 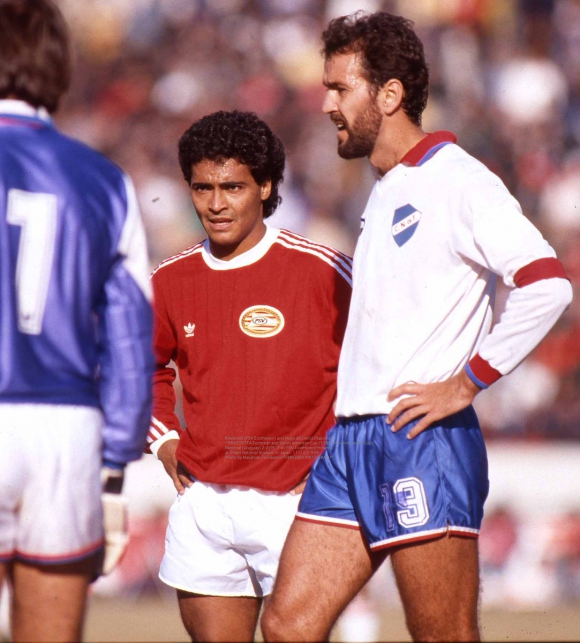 Romario beaten by De Leon and Sere?
Nacional scored first, thanks to Ostolaza in the 7th minute. The Dutch equalized in the second half – Romario in the 75th minute. Regular time ended 1-1.
Two more goals were scored in the extra-time – this time PSV Eindhoven went ahead – Ronald Koeman scored in the 95th minute – but Nacional came back in the 119th minute. Just before the end, Ostolaza scored again. 2-2 and penalty shoot-out followed. And the drama continued with both teams taking the lead and then losing it to 6-6. 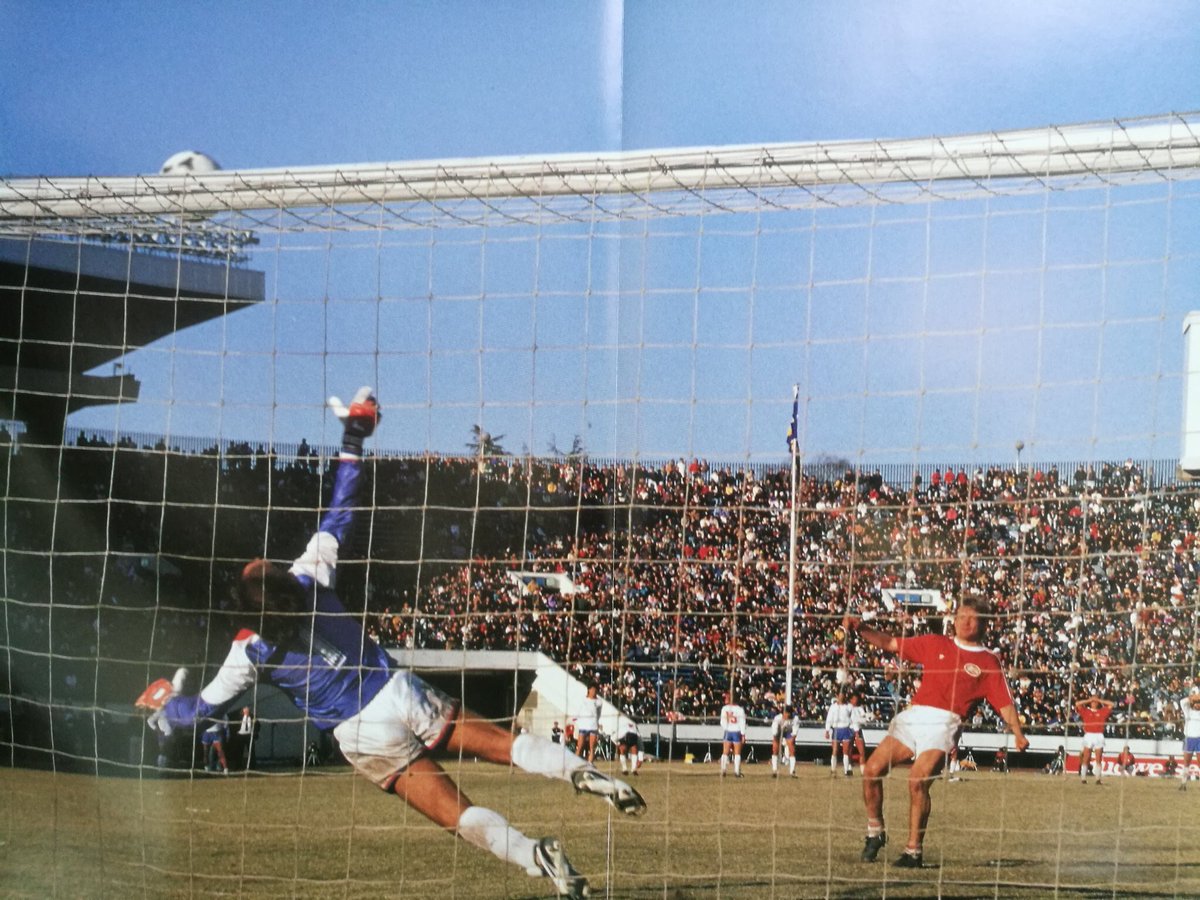 Sere, lucky or not, was the man to watch – so far Gerets, Lerby, and Kieft failed to beat him. 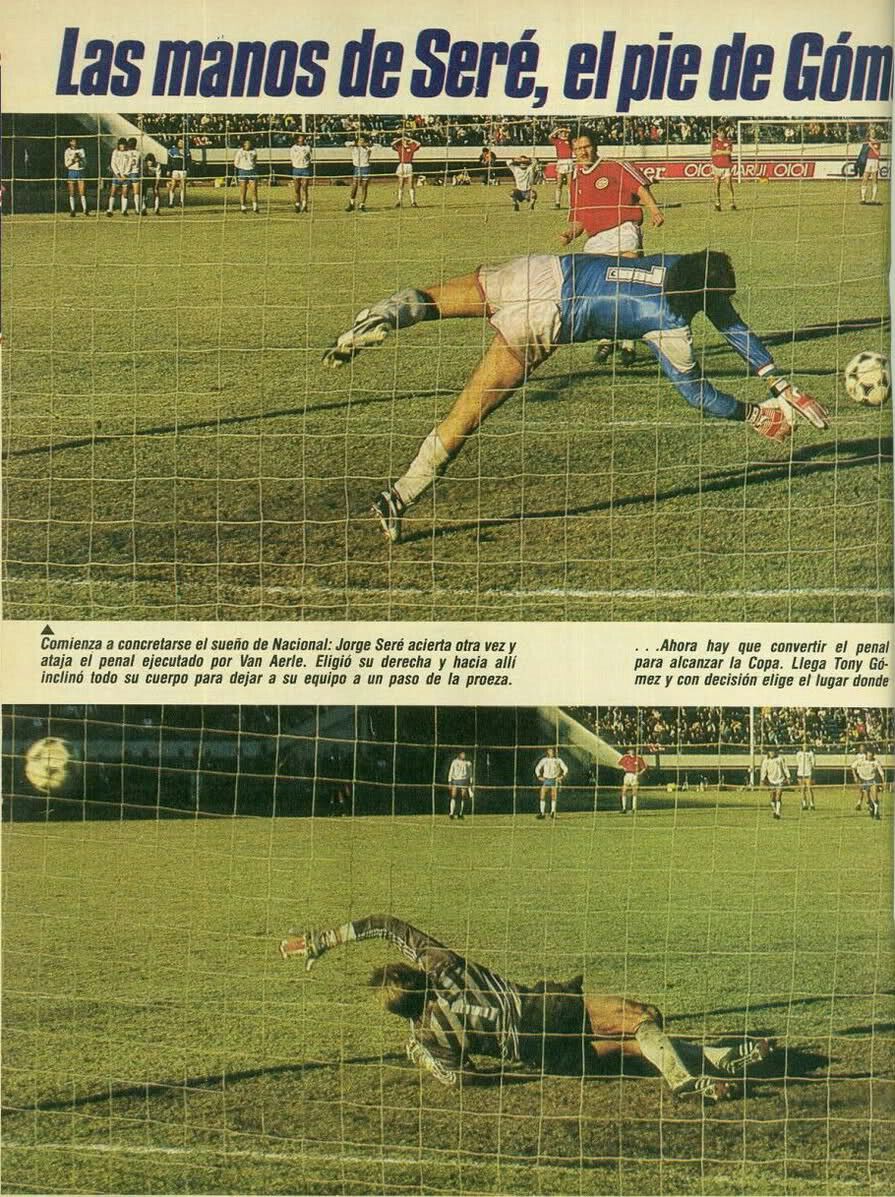 And now Sere saved the shot of van Aerle, but van Breukelen was helpless and 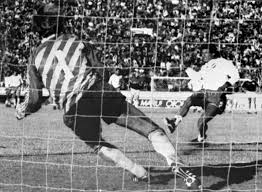 Gomez made it 7-6 Nacional.
Gomez was the hero. 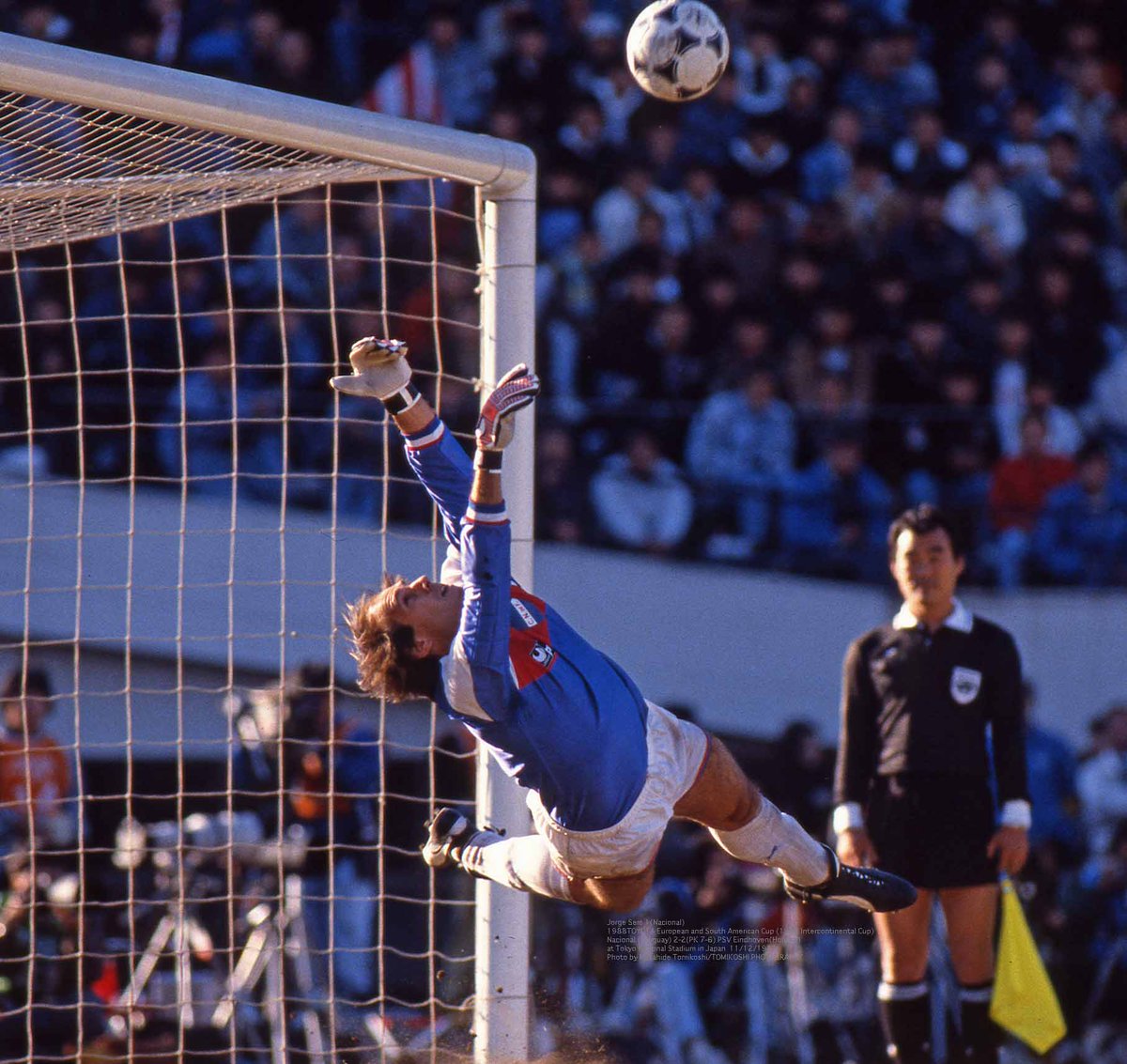 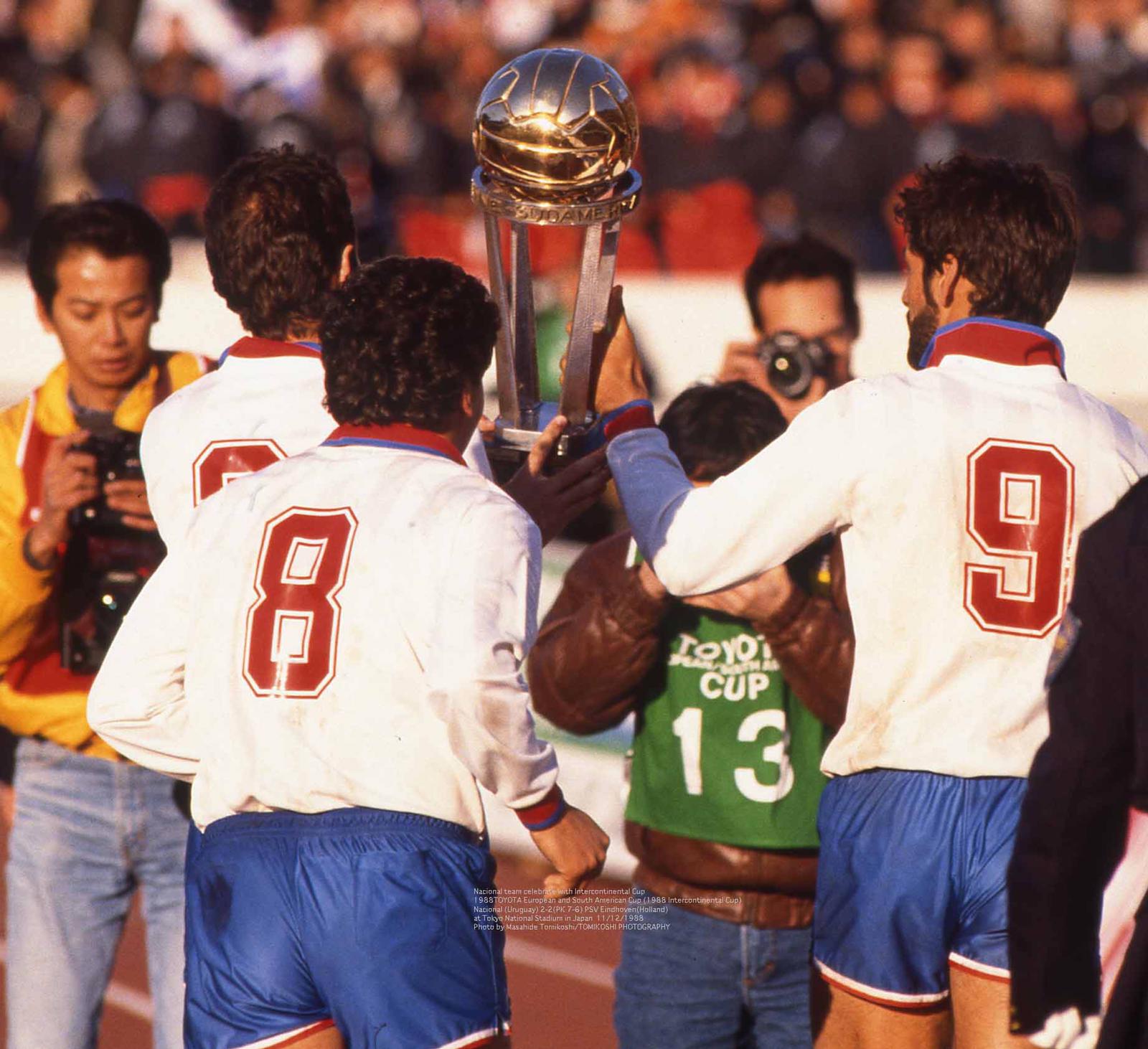 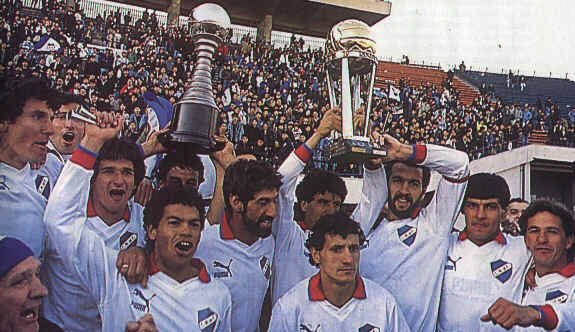 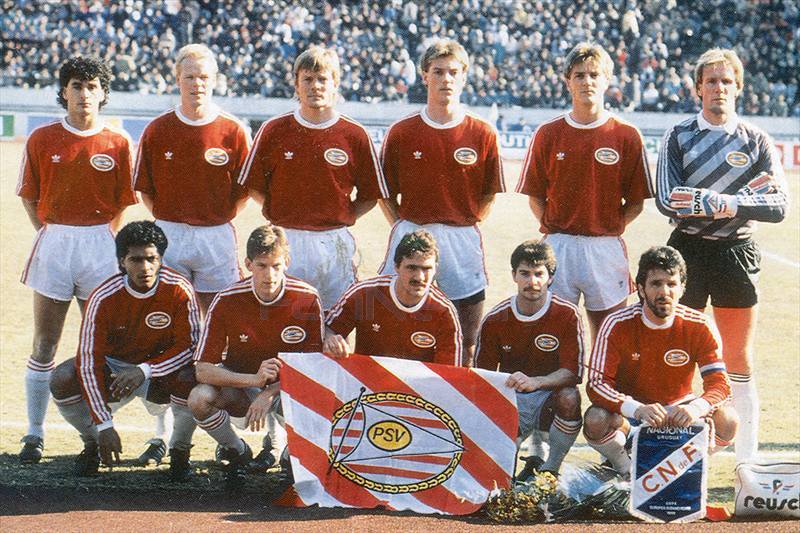 PSV Eindhoven lost dramatically. Standing from left: Gerald Vanenburg, Ronald Koeman, Sören Lerby, Addick Koot, Wim Kieft, Hans van Breukelen. Crouching: Romario, Juul Ellerman, Berry van Aerle, Jan Heintze, Eric Gerets. One may feel sorry for this wonderful squad, but in the same time such a starry team should have been able to beat inferior squad and they did not. Still, it was the greatest season for PSV Eindhoven – but no Intercontinental Cup. They failed to conquer the world and equal Feyenoord and Ajax. 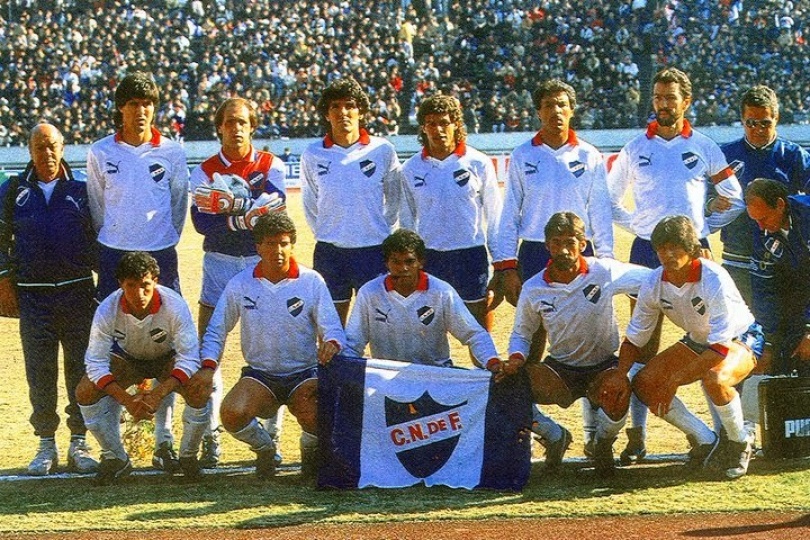 Nacional (Montevideo) – winners against the odds. Standing from left: Ostolaza, Sere, Cardaccio, Tony Gomez, Revelez, de Leon. First row: Vargas, Yubert Lemos, Pintos Saldaña, de Lima, Castro. Trully heroic squad and one should mention again Ostolaza and Sere – the first scored regularly for Nacional during the Copa Libertadores campaign and the second excelled also regularly through the whole year. And both delivered in the last and may be most important match – one scoring both regular goals, the second keeping the ball out of the net during the nerve wrecking penalty-shoot out. Nacional won its 3rd Intercontinental Cup and it was great achievement: Nacional equaled the record of fellow rivals Penarol with 3 Intercontinental Cups – thus, the Uruguayans were the most successful at this level. But unlike Penarol, which played 5 finals and lost 2, Nacional had perfect record: they played 3 finals and won them all. A great victory and time for joy – who would know that will be the last Uruguayan victory of Copa Libertadores and the Intercontinental Cup? From the distance of time it makes it even more memorable and significant… alas, negatively significant: looking at this squad without great players, the future looked bleak for Nacional, for any Uruguayan club. The last international success of Uruguayan club.