May be Koln was infavourably judged so far – their 1977-78 season was truly fantastic: not only champions, but winning the Cup as well. A double! Does not happen every day. Cup and regular championship always differ, which looks like surprise – but these are fundamentally different competitions. Underestimate, negligence, unlucky mistake, and a might team would be gone. Bayern did not even reach the ¼ finals. Borussia (Moenchengladbach) was eliminated in the ¼ finals by Werder (Bremen), a team having miserable season otherwise. Schalke 04 and Fortuna (Dusseldorf) were unable to beat each other after overtime in Gelsenkirchen and had to play a second leg in Dusseldorf – Fortuna won at home, but minimally: 1-0. Koln had it much easier… they hosted the worst team in the Northern Second Bundesliga, Schwarz-Weiss (Essen). Worst, but not in the Cup, where they heroically reached a level Bayern was not able to reach… but the team was very weak, unfortunately. Koln easily won 9-0. No mercy, just hunger. Koln had it tougher in the ½ finals – they still had lucky draw: hosts again. Werder, however, was not easy and Koln clinched 1-0 victory. Fortuna destroyed MSV Duisburg 4-1.

The final opposed two of the top German clubs this year. Similar in a way – not having exceptional cluster of big stars and depending on collective play and spirit – both were ambitious enough. Fortuna was so far climbing up for a few years and perhaps it was time to finally blossom and begin winning. Koln had enough motivation of their own. They won 2-0. 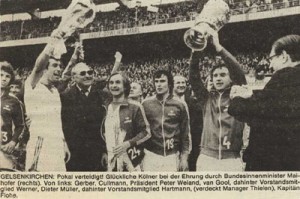 Flohe proudly lifting the Cup. Now, this was familiar… Koln won it in 1976-77 too. They just kept it in their hands. 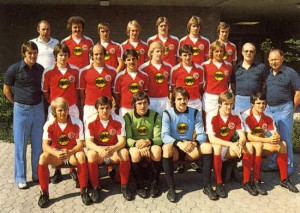 Sad day in Dusseldorf, but still it was not a bad season for Fortuna – they finished 4th in the Bundesliga and Cup finalists. They were one of the most stable teams during the 1970s, and actually improving year after year. Not long ago Fortuna was seen as possible third great German club in making. Perhaps 1977-78 made clear they were not going to be great… by now it was very experienced team, but actually reaching the peak of their potential and most likely decline was coming, if not started yet. The club somehow did not add great new talent to already familiar for years squad – and it was clear by now that Daniel and Baltes were not going to become better players, let alone stars. Zewe, Seel, and the Austrian Hickersberger were getting too old to build a team around them. Neither was first-class star – Zewe and Seel were second-echelon: even when they played for the national team, it was clear that they were not going to be influential regulars, but replaced at the first moment younger talent was at hand. The only player for the future was Allofs – which meant that a new team had to be started. Fortuna were brave, but… no more. 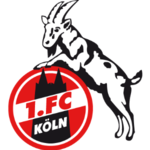 Koln had perhaps their best ever year. A double! May be they were also a great team? 2 Cups and 1 title in two years – hard to be dismissed. Hard to ignore. 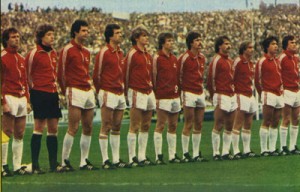 Cup winners! What a season for the Billy Goats! What a year for a club very young by German standards – 1. FC Koln was found in 1948, as a merger of two hardly remembered local clubs – Kolner Ballspiel-Club 1901 and SpVgg Sulz 07. The ‘baby club’ quickly started winning and distinguished itself as the first Bundesliga champions – hence, the constant hopes and longing for another title. Finally wish came true and who was the prime mover and shaker? Who was the reason for the great success? Hennes IV the Great, of course! To enemies it was a joke, for it sounded as a joke… back in 1950 the owner of a circus brought a gift to the club during Koln’s Carnival – a goat. It was presented to Hennes Weisweiler, a star player of the club and very young coach. Hard to tell who was more surprised – the man or the goat: the animal immediately urinated on the shirt of Weisweiler, trying to keep him in his hug. This was seen as significant omen and the goat was named Hennes. He became the live mascot of the club, always present at games and traveling with the squad to away games. The goat was incorporated in the club’s logo, rather strangely stepping on the Koln’s famous cathedral. The club was nicknamed ‘the Billy Goats’. But it was not just a fancy whim… the goat had luxurious life by goat standards, but he was expected to work. To influence and win games and trophies. The pressure was big . Goat life is short. By 1977 already the forth Hennes was reigning.

Hennes IV was honest – he worked hard and delivered. He won the Cup in 1976-77. Now he aimed higher – and produced a double. No other Hennes managed so much – immediately Hennes IV became Hennes IV the Great. Certainly he had the look and appearance of greatness. Forget Hennes Weisweiler and players – it was Hennes IV the Great who led the club to a double. He won it. But it was tough and difficult life with such responsibility: Hennes IV the Great did his best, worked hard… until his heart burst from the pressure. Hennes IV the Great died from cardiac arrest a few years after his great success. He is fondly remembered and set as an example to every new Hennes. Later ones also perished from heart attacks, alas, without victories. The greatest of all goats set very high standards indeed.

Lucky title for 1.FC Koln, but not undeserved. At home, it was great success, waited for since 1964, when Koln distinguished themselves as the very first Bundesliga champions. The club remained strong, but not a title contender – strong enough to end among top 8 teams, that was all. But in 1976 Hennes Weisweiler returned to the club, where he was a legend long before the world knew of him, and immediately got results: Koln won the German Cup in 1976-77. Of course, the fans wanted more… which was not likely to happen, judging by the transfers between the old and the new season: Overath retired. Along with him, another great veteran quit – Wolfgang Weber. Not a single impressive name arrived and, on the surface, Koln appeared weaker than the previous year. Overath out and some obscure guy from Japan in… did not look good at all. The beginning of the season proved skeptics right – Koln lost 1-5 their first match of the season. But skeptics were quickly refuted: Koln became a leader, leaving everybody else except Borussia (Moenchengladbach) far behind. The fascinating race kept everybody on tiptoes to the very end of the championship. Koln needed a victory in the last round and got it with style: 5-0 was a precaution against possible crooked victory of Borussia by more than 11 goals, but nevertheless was impressive, categorical ending of the campaign. It was great for long suffering fans to see their club at the top. It was great and significant victory in another, larger aspect, as well: it was the first time since 1968 West Germany had champion not called Bayern or Borussia (Moenchengladbach). It was the end of long – and getting boring – duopoly. It did not matter that Koln won only on better goal-difference: the reality of German football was redefined at last. 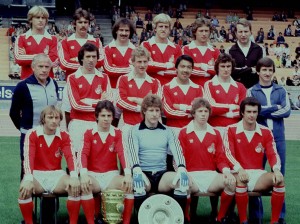 Of course, the new champions were full of famous names: Lohr, Flohe, Cullmann, Dieter Muller, Schumacher, the Belgian striker van Gool. Respectable names like Konopka, Zimmermann, Gerber, Strack, Glowacz. A new Danish player called Preben Elkjaer-Larsen… familiar names, but largely from the distance of the time. In real time, the team was rather strange mix of few current national team players – Flohe, Cullmann, and Dieter Muller – one respectable foreign player at his peak – Roger van Gool – and bunch of promising, yet not exceptional players. One relic from the 1960s was still here: Hennes (or Hannes) Lohr, but he was no longer influential key player. It may be right to attribute the victory to Hennes Weisweiler: he managed to motivate and use whatever players he had at hand. The exotic Yasuhiko Okudera was great discovery: the Japanese became a regular. Perhaps the other right decision was trusting Tony Schumacher – only two years ago Schumacher was generally a flop, sharing goalkeeping duties with similarly unstable Slobodan Topalovic. Topalovic was considered more promising of the two… Weisweiler however chose Schumacher and made him firm starter. Topalovic was dismissed in the summer of 1977, which left Schumacher without competition – apparently, it was better for his confidence, for the rise of the great goalkeeper really started in 1977-78. Yet, Weisweiler had few choices – the attack was reduced to two-men line, something rare in the 1970s: Dieter Muller played 33 matches and scored 24 goals. Van Gool played 32 games, scoring 12 times. Lohr, already 35-years old, appeared only 8 times and scored a single goal. Elkjaer-Larsen did not appear even once! The defense, depending of standpoint, was either very reliable or there were no options: Harald Konopka (31/3), Roland Gerber (34/2), Gerhard Strack (32/2), and Herbert Zimmermann (32/2). A mid-table club’s line really… competent, hearty, but lacking a pillar like retired Woldgang Weber. Midfield, in a way similar to Bayern, carried the season: Heinz Flohe, the star player and captain now, and Herbert Neumann did not miss a single match – Flohe was replacing Overath and was the playmaker, but although he had strong season and scored 14 goals, he was not very imaginative player. Certainly not a second Overath… Okudera played 20 matches and scored 4 goals – good debut, but more was to be expected from him next season perhaps. Heinz Simmet, hardly a big talent, appeared in 23 games. Another unknown – Dieter Prestin – played 14 matches. Holger Willmer – 11. Jurgen Glowacz, either because of injuries, or bad form, appeared in only 5 games – and he was likelier choice than anonymous Willmer, Prestin, and Simmet. In part, lack of enough quality players led to high rotation. In part, short defense and attack inevitably was compensated by midfielders. To a point the second 1974 World champion in the team – Bernhard Cullmann – was used as an emergency player, plugging holes in other lines. Nominally a defender, Cullmann was used in ’emergency’ roles in the national team – he was reliable and versatile enough, if not particularly bright and creative player. Cullmann played 27 games, scoring 6 goals. Not bad for a defender… yet, he was not the key defender of the team. With such limited squad, the best solution was disciplined collective play – and Weisweiler achieved precisely that. Koln was not a team praised for exciting football, nor it was found innovative – to a point, it was over-achieving team. And given its limitations, nobody saw Koln as building a dynasty: it was quite sure that another title was unlikely. But this was evaluation of potential – for the moment, Koln won the title – a fantastic success.