The Supercup. Played in February 1989 between PSV Eindhoven and KV Mechelen. Perhaps an early sign of what was coming: teams full of foreigners. Now, Belgian football always permitted many foreign players, so it was not them, but the Dutch. They also had lax rules about the number of foreigners on the field, but it was rarely used option. A look at the leading clubs from the 1970s shows that they practically never used more than the European standard of 2 foreign players on the field – in the Supercup games PSV Eindhoven used Gerets (Belgium), Danes Lerby and Heintze, Chovanec Czechoslovakia), Romario (Brazil). All starters – a sharp contrast to the 70s, when Ajax, even when having 3-4 foreigners never started with more than 2. But that is a minor point, only suggesting for the coming changes in European rules and attitudes. The Supercup final was the usual lukewarm affair: PSV Eindhoven’s motivation was questionable. Still, it was a battle between teams was little international success, so adding one more cup would have been important to both teams, espacially teams coached by already well known ambitious coaches – Aad de Mos and Guus Hiddink, both Dutch. To a point, it was Dutch clash, for Mechelen had 5 Dutch players in the starting 11. PSV Eindhoven was the classier team by far, but the Belgians were not only well made team, but also at their peak. Yet, motivation was a factor… and it showed best in the first leg, played in Belgium: modest Mechelen was the better organized, inventive and dangerous team. It was not before they lead by 2 goals the Dutch woke up – until then Gerets, Ronald Koeman, Lerby, Vanenburg were practically unseen. Vanenburg remained absent the whole game and Lerby was quite disappointing. Seemingly, Hiddink was unable to utilize Romario yet and his presence was odd – the game was not structured to help him at all. There was little creativity in attack and few scoring options – and the little PSV made, they blew it away without troubling Preud’homme much. 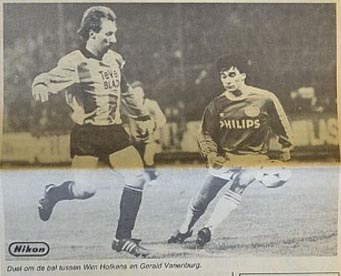 This photo pretty much sums the games: the Belgians usually got the ball. The Dutch were late and often lost. 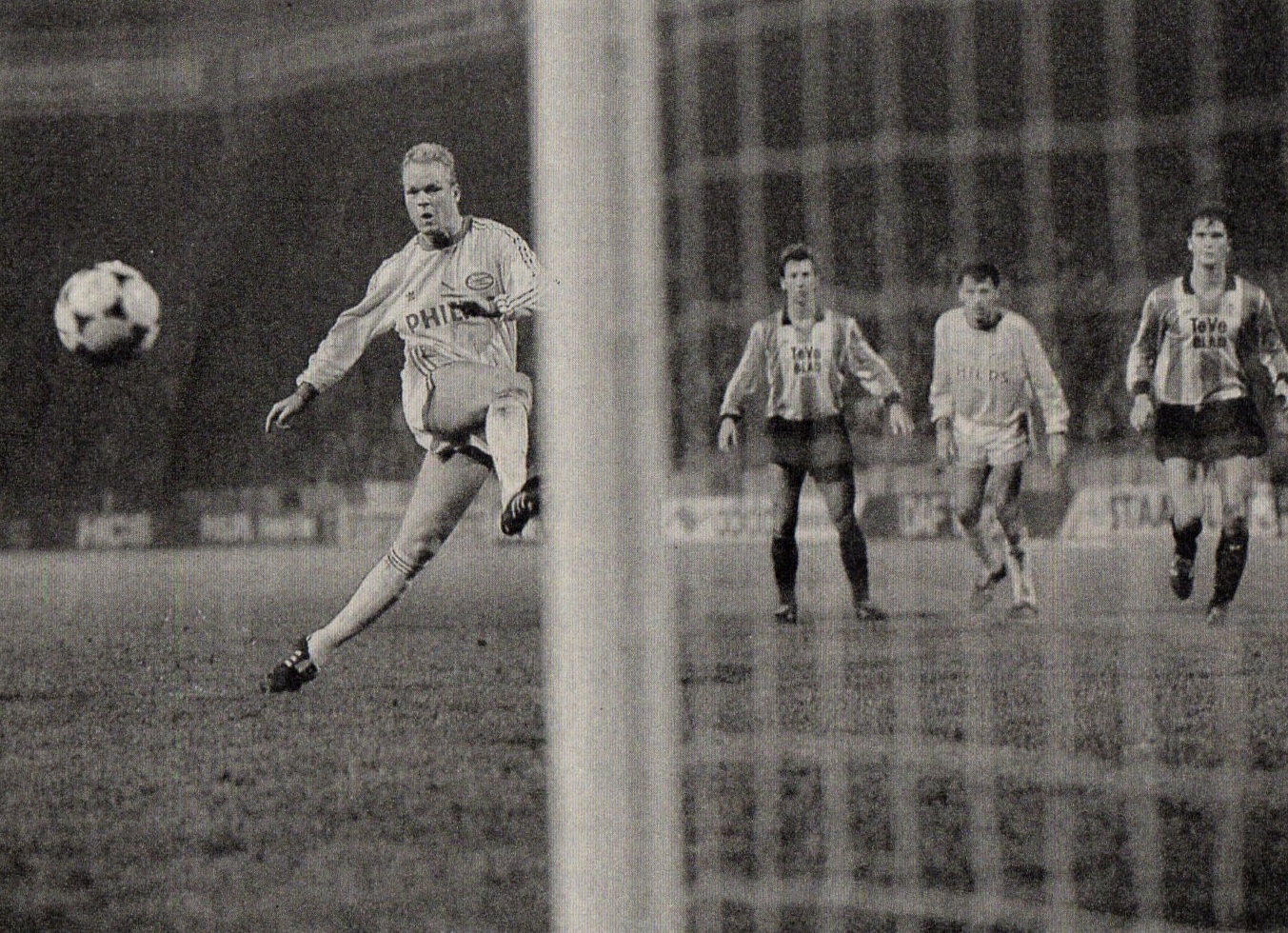 It came to that – obviously superior individually Dutch players failed. Like Ronald Koeman here, missing a penalty. The Dutch mostly failed in midfield – no creativity came out of their midfielders and it was up to Ronald Koeman to surge ahead and try both organizing and finishing attacks. At first PSV played curiously outdated football with strict lines and Lerby so deep back that he was playing more like sweeper than midfielder and from such deep position his long passes ahead became simply too short to create any danger and practically never reached Romario. Meantime Mechelen completely outplayed the Dutch, pressed hard, moved them into entrenched defense and the domination produced 2 goals in 2 minutes. Only after the second goal PSV Eindhoven woke up, but Mechelen, now having to defend themselves were doing it well and tried to go ahead at the first opportunity. With Gerets and Ronald Koeman now constantly attacking, it was became clear that well organized team like Mechelen would take advantage of their absence back. And in the 50th minute all was over – Mechelen scored a third goal. After that the illusionary dominance of PSV Eindhoven ended – and more: only desperate efforts by Lodewijks and Gerets preventged a forth goal and after that two great saves by Lodewijks kept the result ‘only’ 0-3.
PSV Eindhoven won the second leg, but Gillhaus scored the only goal of the game in the 78th minute! The final was decided in the first leg, that was that.
1st Leg, Achter de Kazerne Stadium, Mechelen, 1 Feb 1989, att 7000 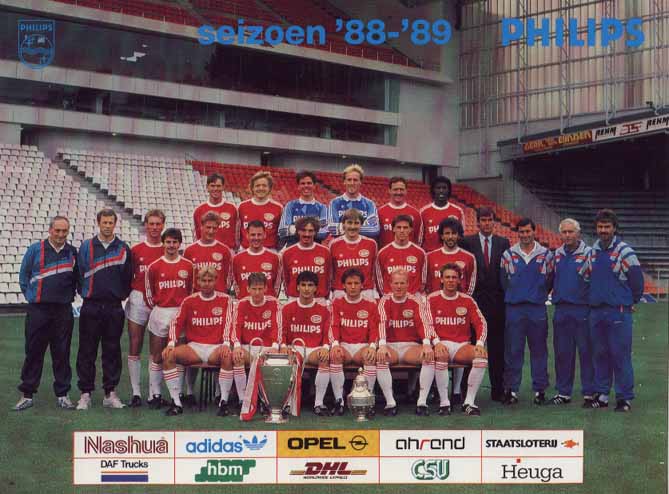 PSV Eindhoven lost the Supercup with their most successful team! Hard to judge why: the Supercup never attracted big interest, especially in the big clubs. February is a very odd time for strong team to play relatively unimportant tournament – there is always the ongoing domestic championship in mind, there is an European tournament most likely to look for. Better concentrate on important things and keep players healthy for them. It is not the time to be in peak form. But there was something else – tradition. Back in the 1970s, when PSV Eindhoven had wonderful squad, they won practically nothing on the international scene. They played exciting football, yet, when mattered most they usually failed. It was the same again… great squad, their best international year, but again inconsistency: they lost to inferior Nacional (Montevideo) the Intercontinental Cup and now the Supercup to modest opponent. One would think a club well respected name would be eager to win as much as possible when on top of Europe. Well, they did not. 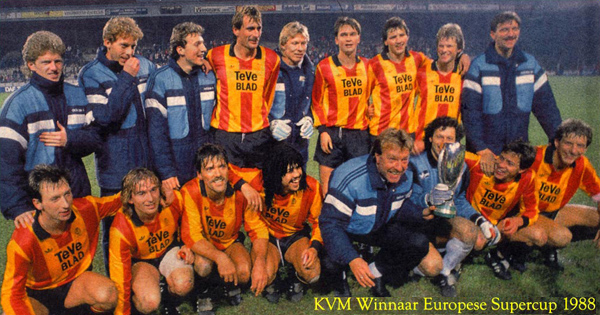 KV Mechelen won the Supercup. What a story! Modest , internationally almost unknown, they won twice over great Dutch clubs and won the Cup Winners Cup and the Supercup. However, international obscurity somewhat blinds people to what really happened: KV Mechelen was carefully building their greatest ever squad for a number of years, gradually adding good additions and getting stronger and stronger. After their success in the spring of 1988 they acquired Johnny Bosman from Ajax, for example. Michelle Preud’homme was already recognized as a great goalkeeper – although so far a second choice for the national team of Belgium. There were few other national players of Belgium – Emmers, for instance. Erwin Koeman won the 1988 European championship with Holland. The Israeli Ohana was also national team regular. Add the young talent Wilmots. Not an anonymous team, but not full of stars: it was more than decent squad coached by talented and ambitious Aad de Mos – both coach and players aimed to prove their worth. And they did: the Supercup may not have been a very valuable cup, but Dutch second and third raters (Hofkens, Rutjes, den Boer) practically outplayed world-class stars like Ronald Koeman, Vanenburg, not to mention the foreigners. Wonderful victory of the underdog.