The UEFA Cup. Brand new winners in every European tournament this year. Take it as you like. As a example of the general decline of the game during this decade, which more or less leveled most clubs equal – as long as you keep a team physically fit and tactically minded, you can prevail over anybody. Fighters canceled out artists and having great stars and big money no longer guaranteed success. Or take it as a sign of the embedded democracy of the sport – no aristocracy to rule for ever. A small club with sound policy could make successful team, capable of overcoming anybody, including Maradona-led super-expensive squad. Or take it as reshaping of order – big clubs for various reasons failing and declining and other teams rising from depths. The cliché ‘there are no weak teams’ was born in the 1980s and it was largely true: there were fewer and fewer weaklings, who would be just eliminated walking. One had to fight all the way and against everybody. And the big European clubs did not like it – they were not winning trophies, too many small clubs obstructed their way, degraded them, made life difficult, took away the glory. Hence, new efforts to reorganize European football so only the big clubs would play and win – attempts to create exclusive European league of the big clubs seemingly came at the end of every decade, targeting the UEFA organized European tournaments.
Given the current situation of the clubs, no surprises in the first round of The UEFA Cup and only two in the second round: to a point, the elimination of AC Milan by Espanol (Barcelona) – 0-2 and 0-0 – and certainly Jiventus’ loss to Panathinaikos (Athens) – 0-1 and 3-2. It was on away goal rule, but that was mighty Juventus losing to Greeks! Milan’s loss was easier to excuse – the club was painfully coming back from their almost destruction in the end of the 1970s and was still in shaky rebuilding stage. However, it was Milan learning the lesson from the loss and taking rapid measures to ensure no such things will happen again – Juventus missed the boat, at least for awhile. In the third round one more Italian scalp was taken by Espanol – this time Inter’s (1-1 and 1-0). In the ¼ finals Barcelona saw the end of their own road – lost to Bayer (Leverkusen) 0-0 and 0-1. It was no fun at all: Bayer won at the holly home of Barca. So, the ½ finals had a bit strange teams playing and went against the odds of tradition as well: Espanol eliminated FC Brugge in overtime, the regular matches ending 0-2 and 2-0, but the Spaniards played the leg at home and managed to score in the additional time. Bayer eliminated fellow West Germans of Werder – 1-0 and 0-0.
Thus, Espanol (Barcelona) vs Bayer (Leverkusen). Who would believe it a few months earlier? But both teams had excellent campaigns – Bayer did not lose a single match so far: 5 wins and 5 ties. Espanol had 6 wins, 3 ties and lost one match. To predict the outcome of the final was practically impossible – the opponents were seemingly equal. Given the German tradition of winning finals out of nothing, slight favour for them, but a tiny one – after all, nobody played doggy football as the Spaniards.
The first leg was in Barcelona. 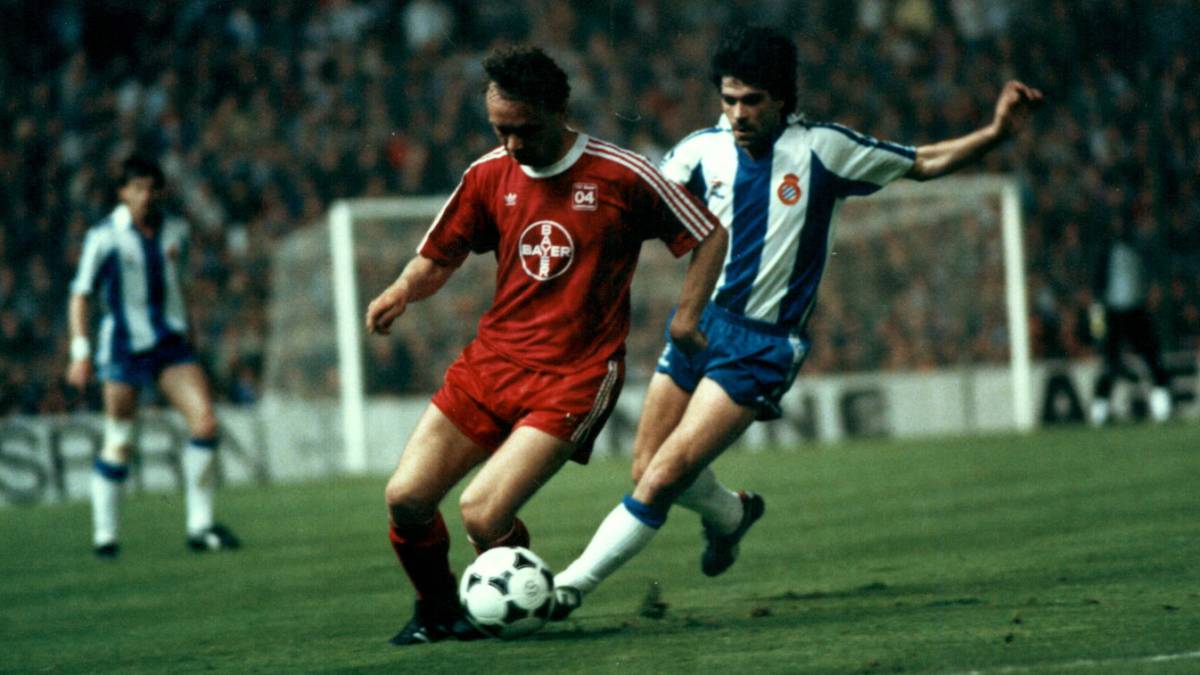 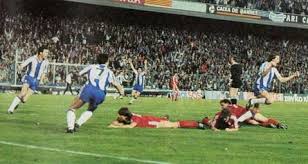 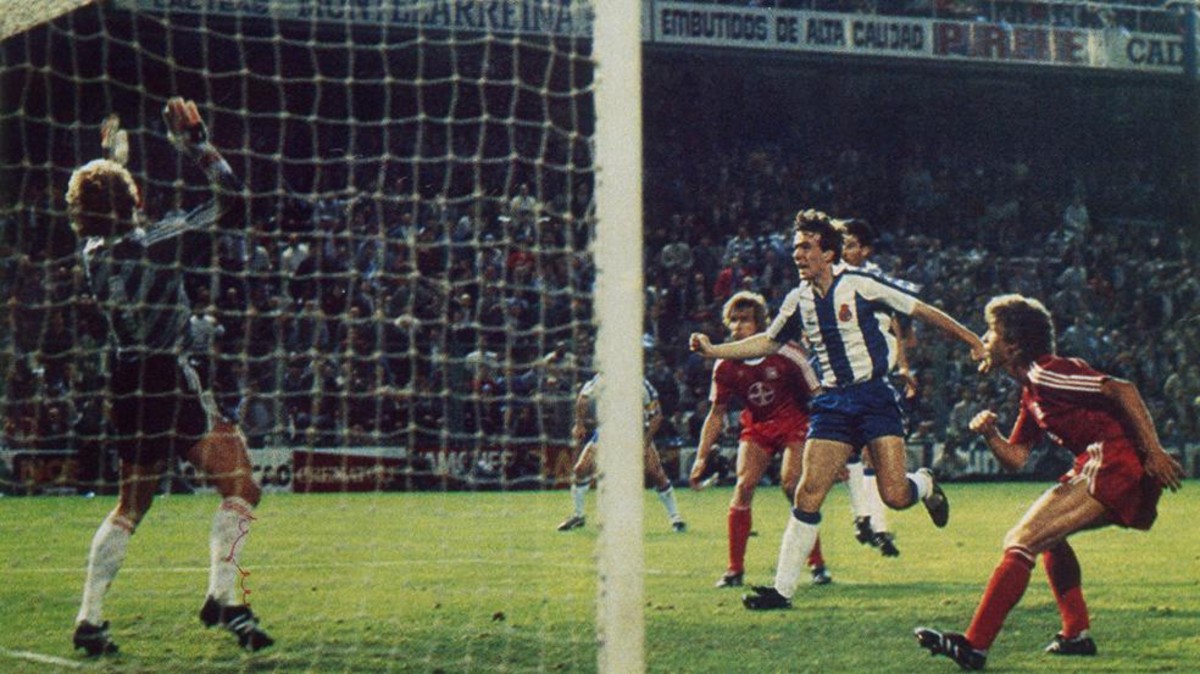 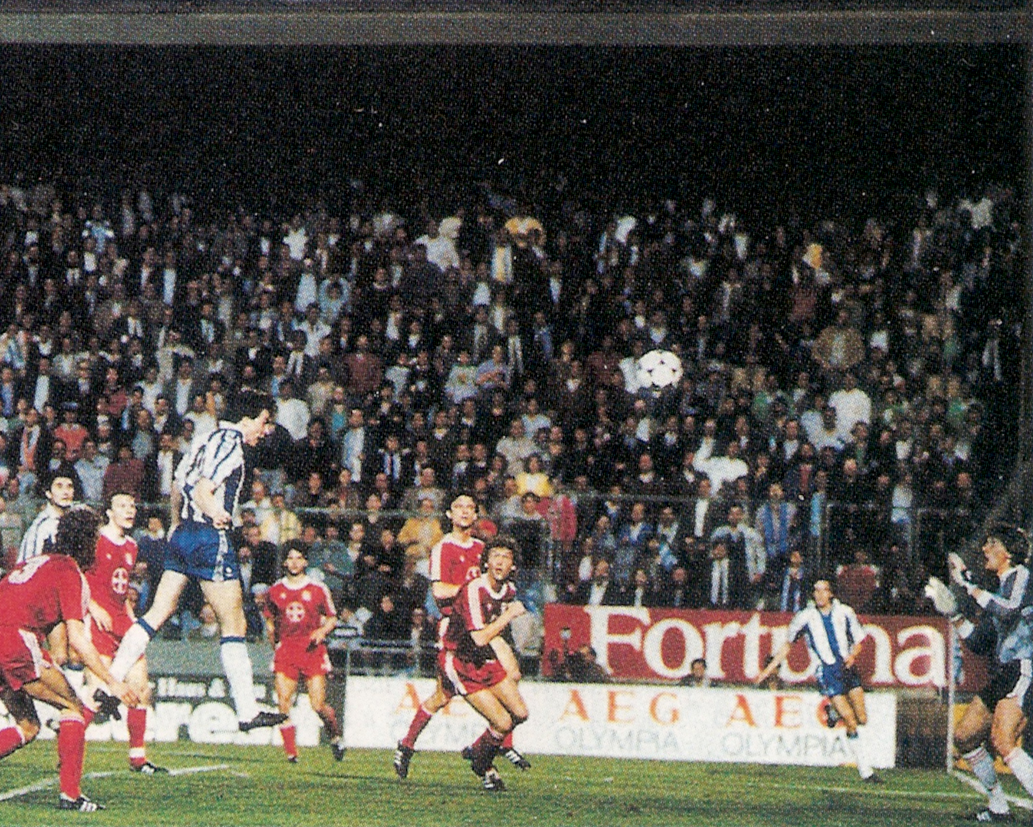 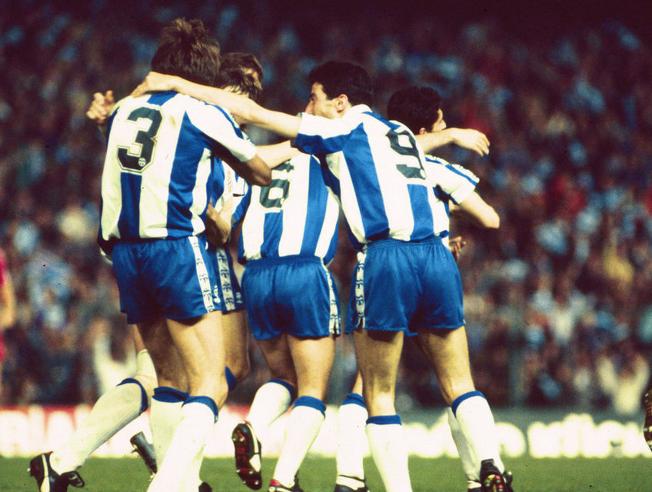 3-0 Espanol at the end. Looked like the Cup was theirs… if ones forgets who they were playing against. 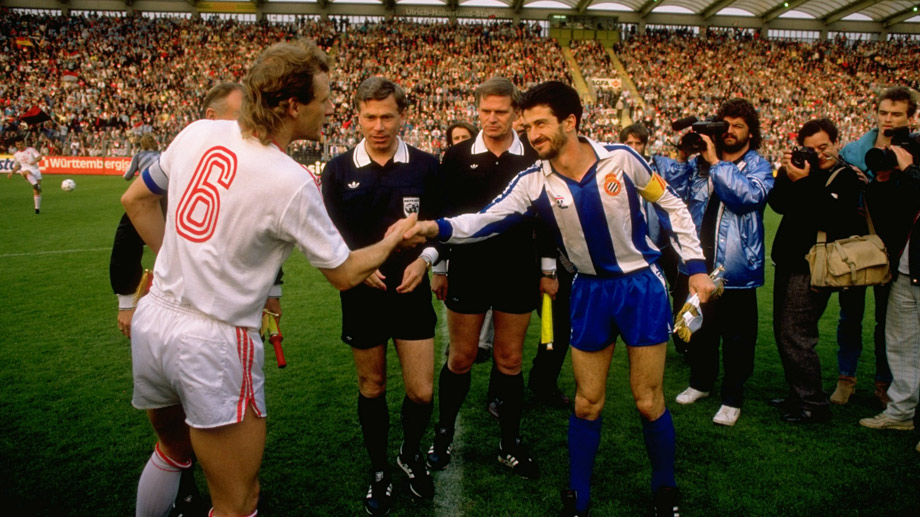 The second leg in Leverkusen – Bayer chose to play at home, which meant twice smaller attendance than Espanol had in Barcelona. But home is home. 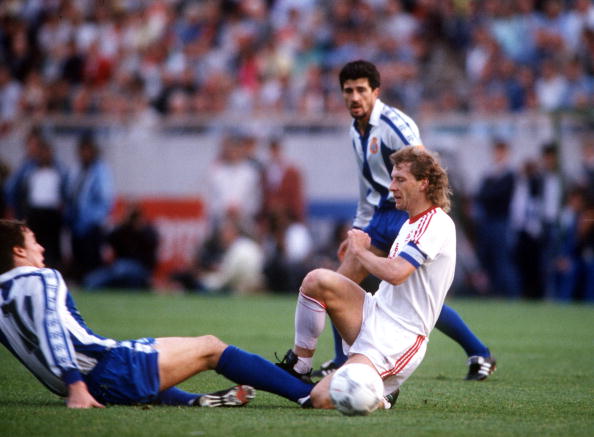 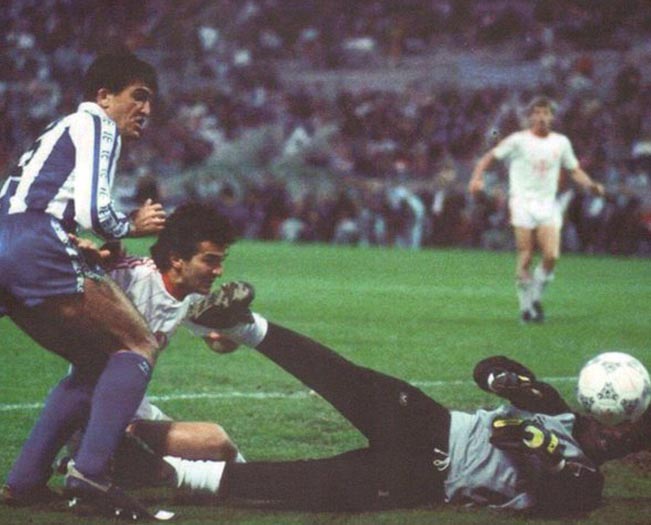 N’Kono’s leg is also suspect, but it was desperate and fruitless attempt to save the ball. Well, he did not on this occasion. 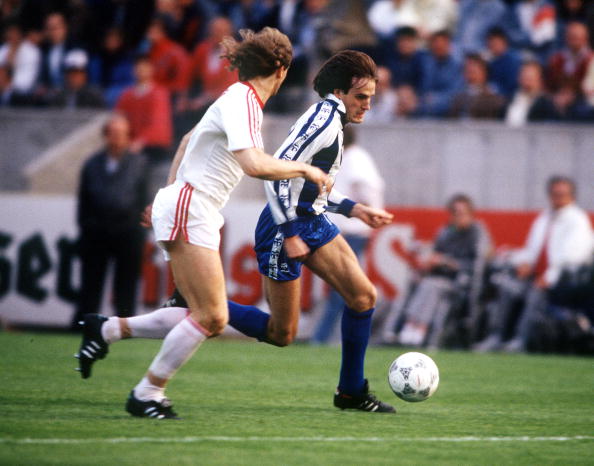 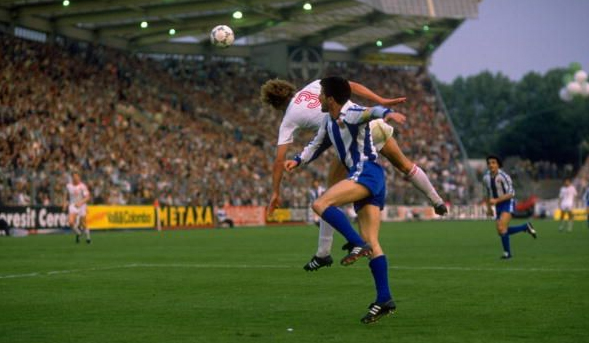 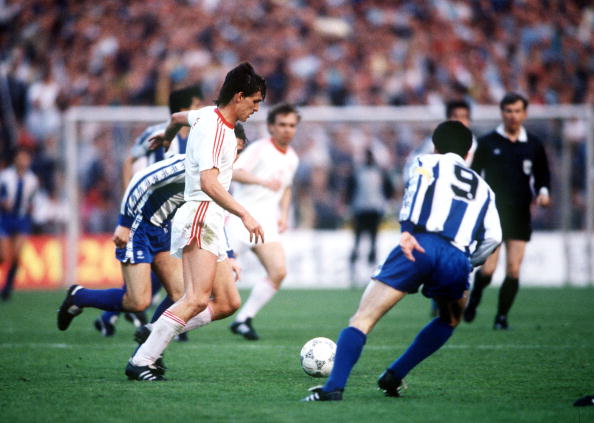 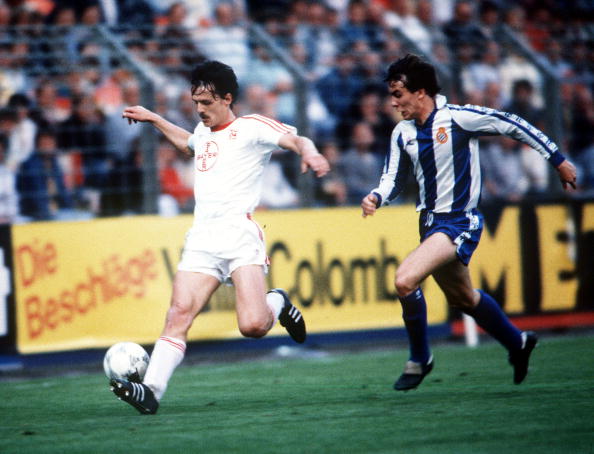 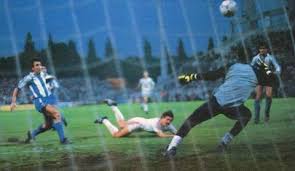 Bayer had to return 3 goals – it was no joke, 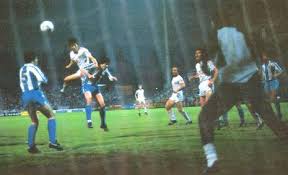 so they attacked and 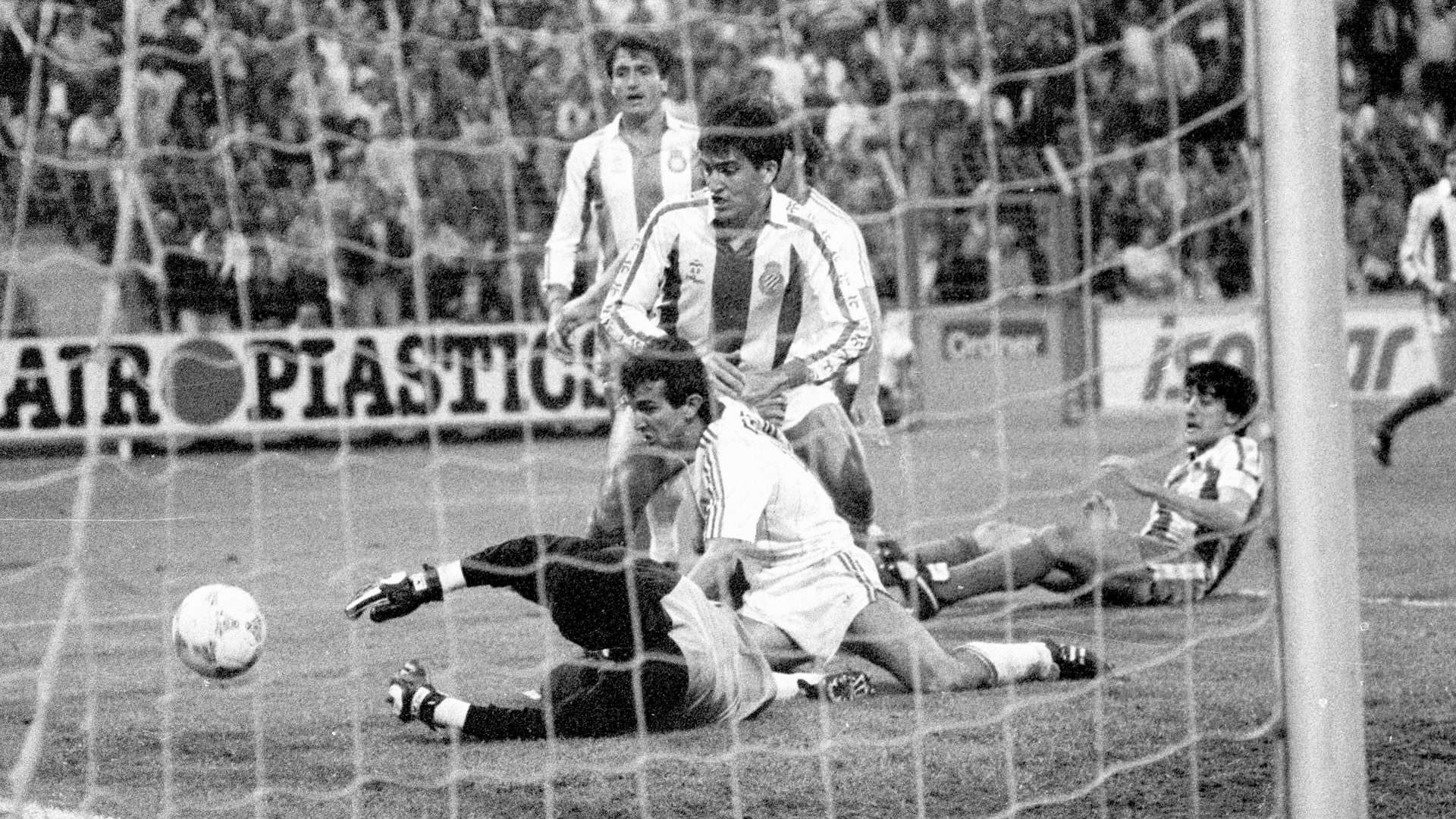 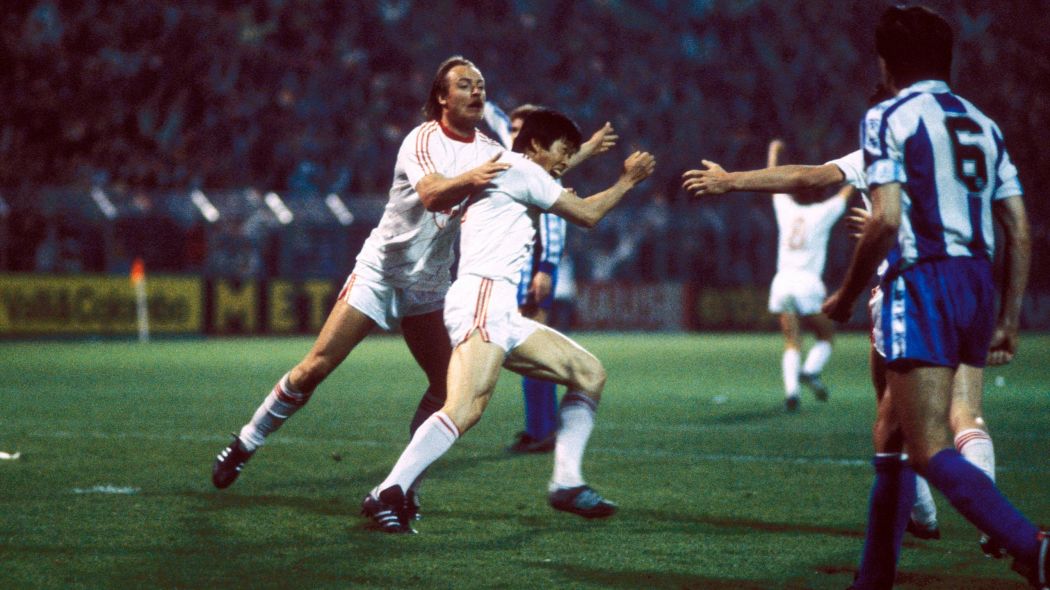 Finally Bum-Kun Cha made it 3-0 in the 81st minute. At the end it was 3-3 aggregate – the Germans did the impossible for others, but so far only restored the equilibrium. All their goals were scored in the second half – it was quite difficult to overcome Espanol, but in the same time crashing them in the second half also meant that tiredness and desperation affected the Spaniards.

Bayer had the advantage somewhat – it did not materialized in the extra time and penalty shoot-out followed. Full drama. 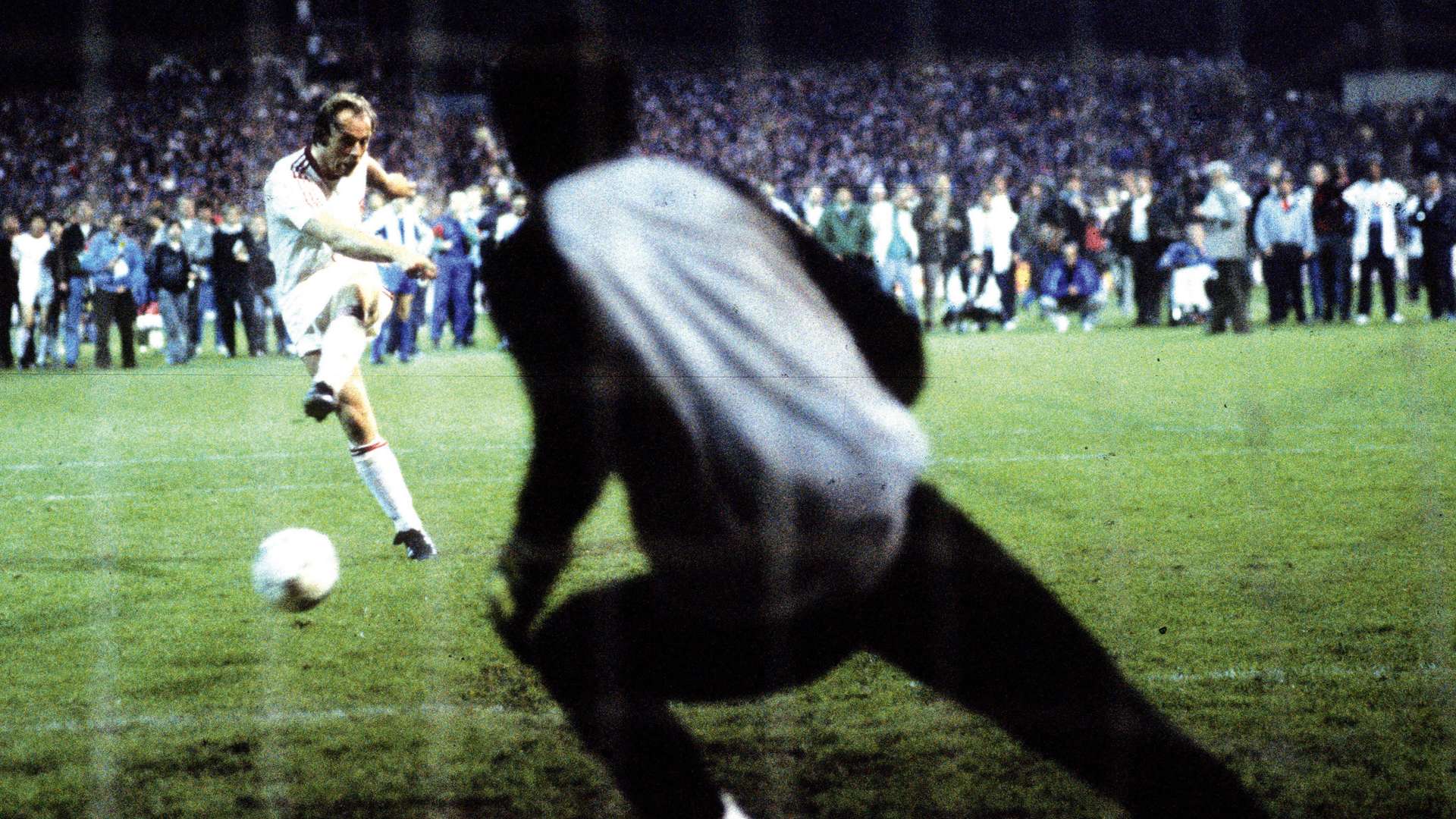 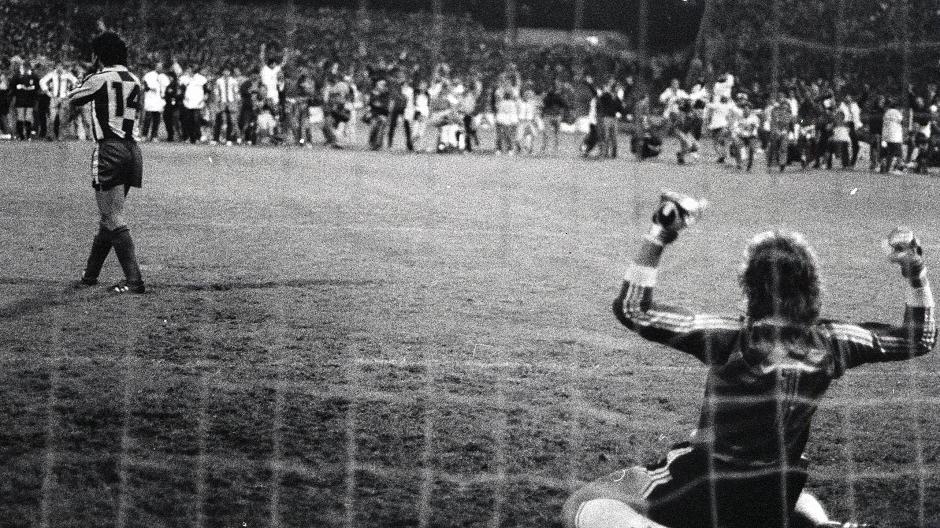 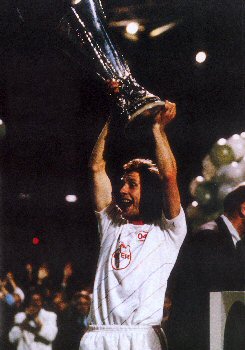 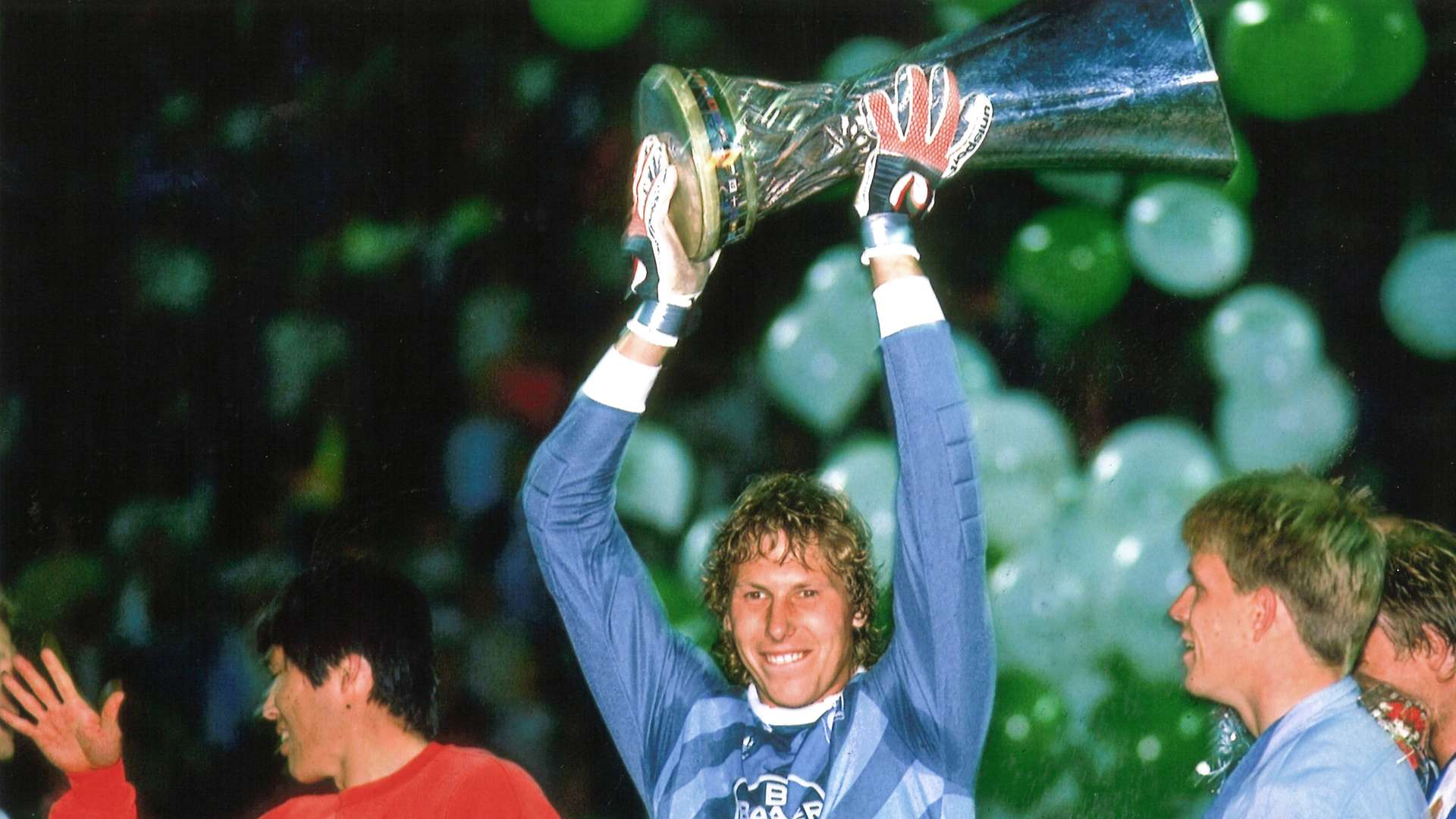 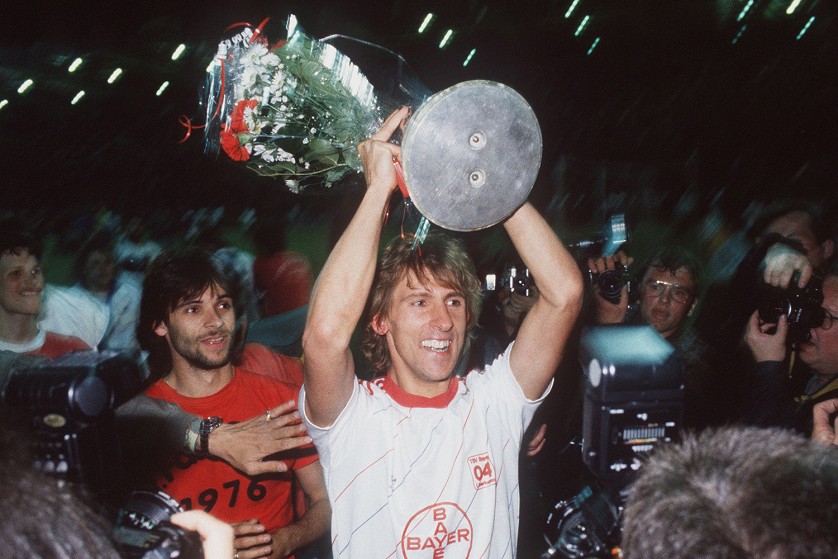 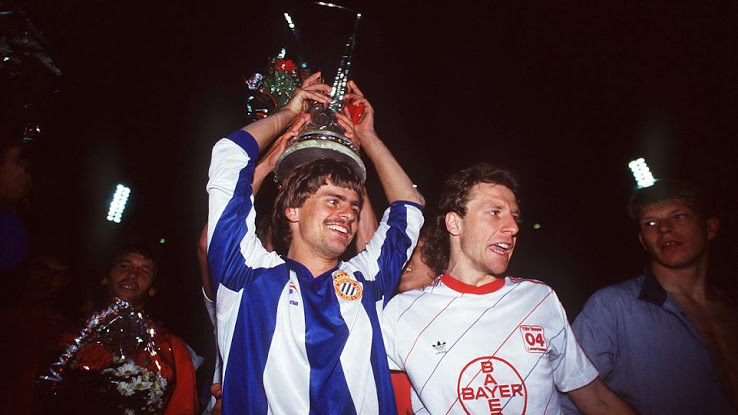 Goes without saying the winners were happy. 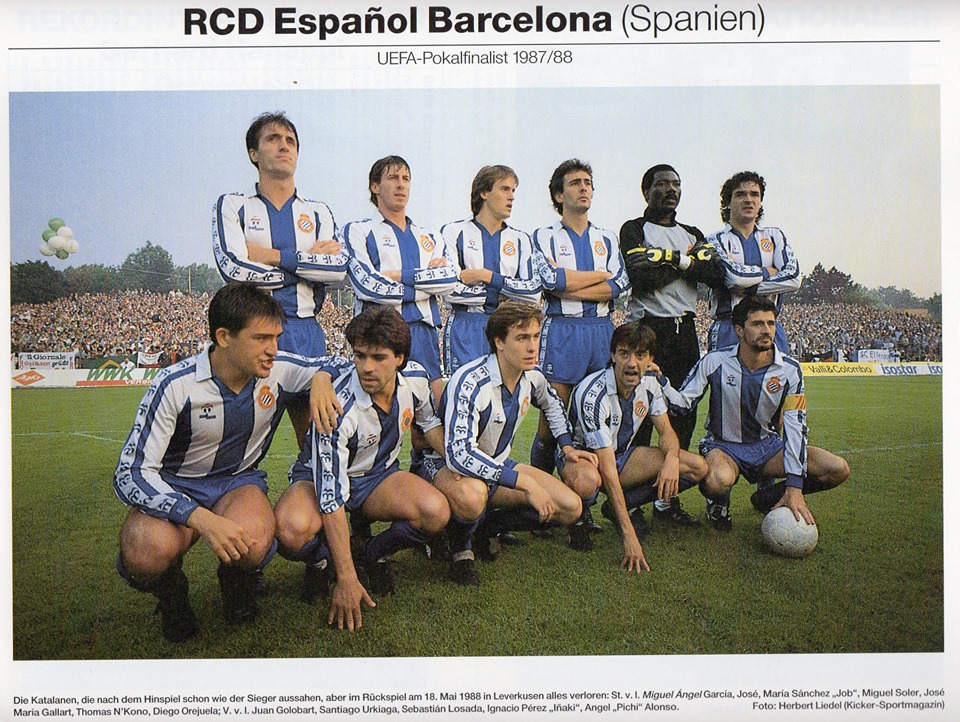 Espanol (Barcelona) lost its chance to win international trophy. Too bad. Too unlucky – losing without losing. This may have been the best squad in the history of the club,but only second best at the end – which does not count. Thomas N’Kono missed his chance to win European trophy. Pichi Alonso, Soler, Losada, Laurdisen – it was not a bad team, yet, hardly a great one. Pretty much equal to the opposing squad in class, therefore, the result was fair and luck decided the outcome. Not in Espanol’s favour and second chance was already highly unlikely. 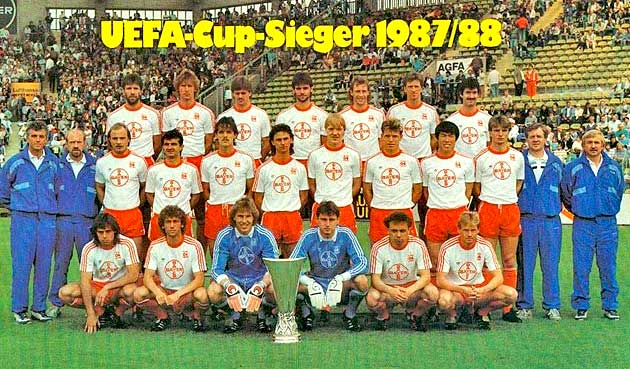 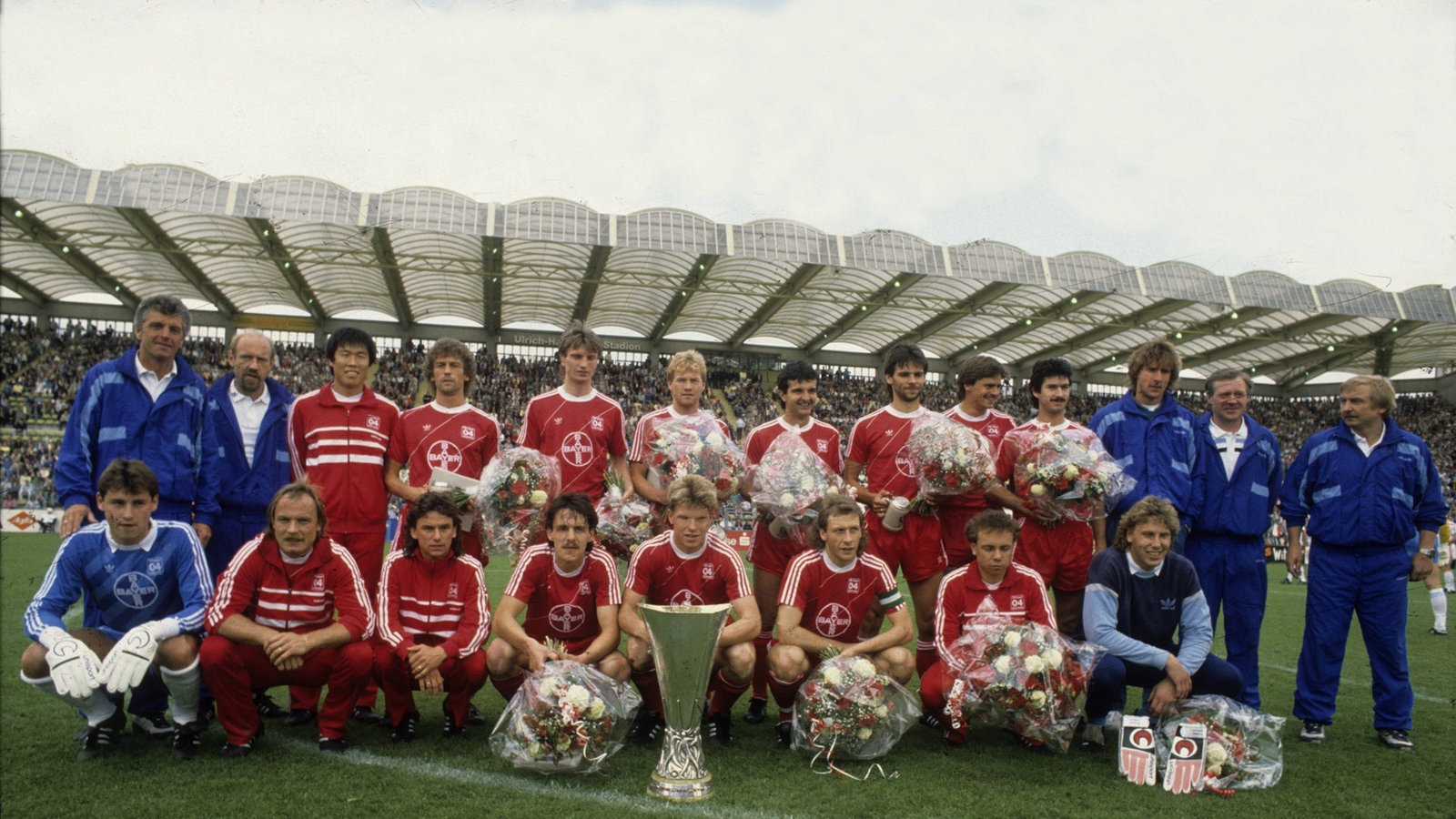 First time winners deserve a second look – instant legends at home, but it was also highly unlikely they would repeat such international success. That is the other reason for a second picture – let look at them now, for there will be no more European trophies. If you don’t like them, take Aspirin.