First Division. In the 1980s, especially the second half of the decade, various schemes were employed, trying to combat increasing ills of the game: harsh physical style, leading to boring games and low scoring, along with increasing inequality between top and second level teams and never ending financial problems. Poland was no stranger to experiments and some new ways were used this season, resulting in mysterious final record: looked like ties in regular time were not permitted and extra-time was played in order to get a winner. But the numbers are difficult to grasp, here is an example – the final record of the champions: 13-6-7-0-4. What does it mean? Regular time wins, extra-time wins, ties after regular time, losses after regular time, regular time losses? Looks like, but the points tally with such scheme: the champions ended with 51 points. Coming from what? The new rule was an attempt to increase scoring and attacking football: for a win by 3 or more goals, the winner got extra point. A loser by 3 or more goals got 1 point deduction. Apart from that – dominance of Gornik (Zabrze) on the top, one outsider at the bottom, and 4 teams going to relegation play-offs after the regular season with the somewhat unpleasant result that the weaker teams during the regular championship managed to keep their places in the league at the expense of the stronger. 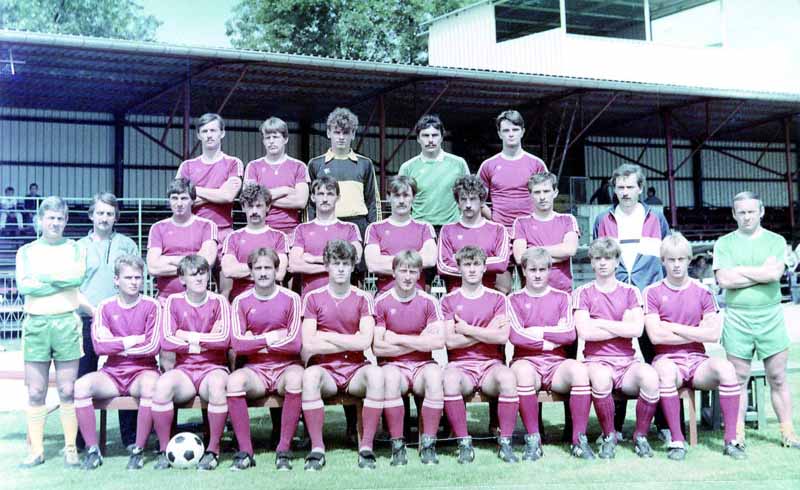 Stal (Stalowa Wola) was the outsider, probably to nobody’s surprise – last with 16 points and relegated. 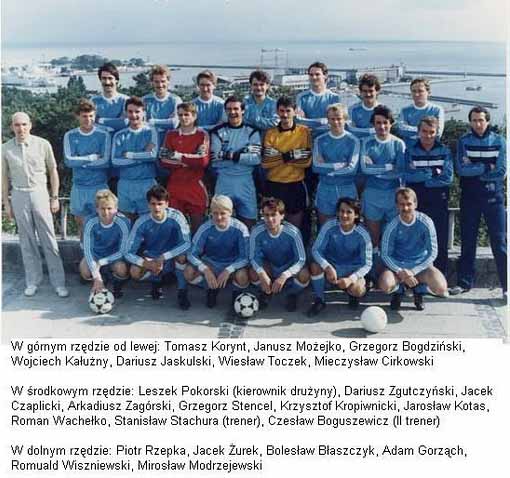 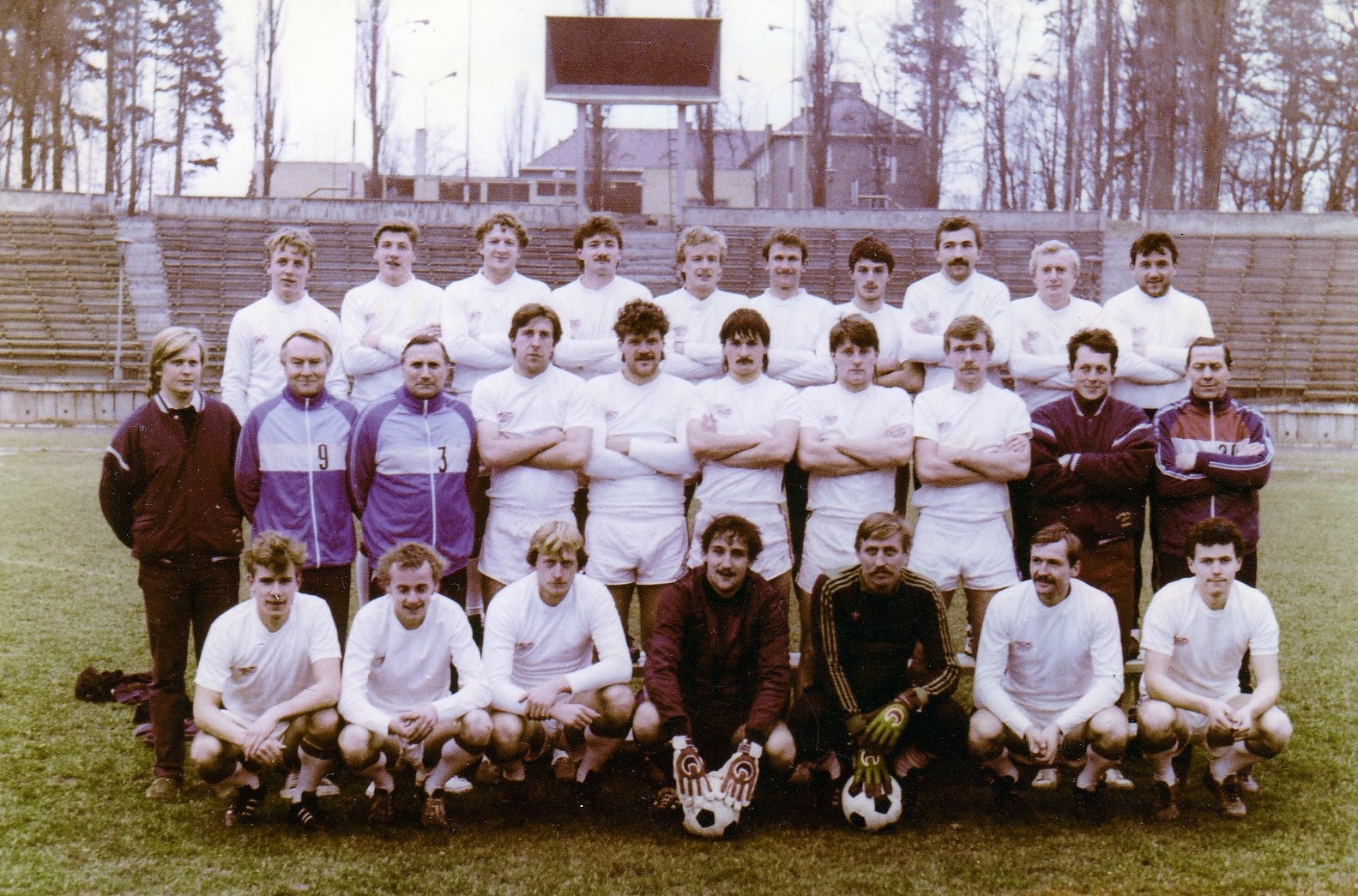 Gornik (Walbrzych) – 14th with 24 points. Nothing special, this club was just happy to keep place in the league. As the lowest of the teams going to relegation play-offs, they had to face the highest placed team. No chance? Wrong! Gornik won the first leg away 2-1 and the second at home kept 2-2 tie. And survived! 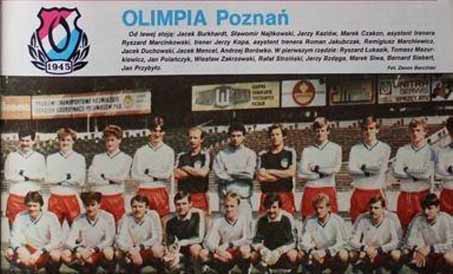 Olimpia (Poznan) – 13th with 24 points. In the shadow of strong years of their local rival Lech, Olimpia looked like a candidate for relegation. But like Gornik (Walbrzych), they put themselves together when it mattered most and sent higher-placed team to doom. Interestingly, in the exactly same way Gornik did it: Olimpia won the away leg 1-0 and then kept 2-2 tie at home. If anything, at least the rarity of local derbies was preserved for one more year – only Lodz and Poznan had more than one team in the top league. 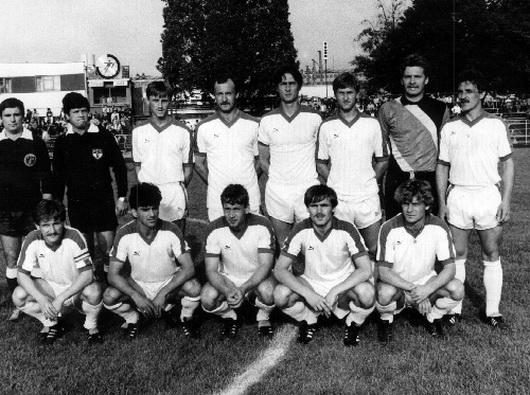 Lechia (Gdansk) – there surprising strong period already ended and they sunk low to familiar grounds: 12th with 26 points. Normally, safe, but not this year and after losing the relegation play-off against Olimpia (Poznan) 0-1 and 2-2, they swallowed the truly bitter pill: relegation! Back to Second Division. 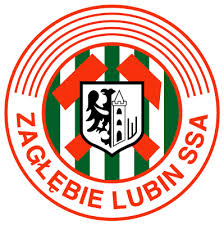 Zaglebie (Lubin) ended 11th with 26 points. Then the terrible happened – Gornik (Zalbrzych) beat them in the relegation play-offs 1-2 and 2-2 and Zaglebie went down. Like Lechia (Gdansk), they were very familiar with second level football, but under normal rules they would have been safe. Too bad.

Pogon (Szczecin) – 10th with 28 points. Safe and good for at least one more season in top flight. 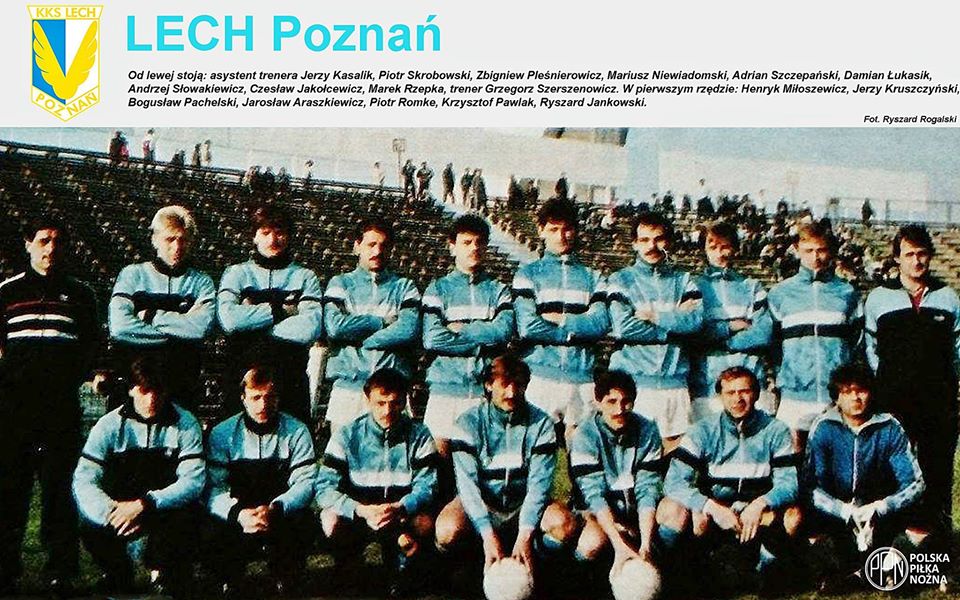 Lech (Poznan) – although they were champions not long ago, nothing special this season. 9th with 28 points. Yet, they had a good reason for a happy celebration. 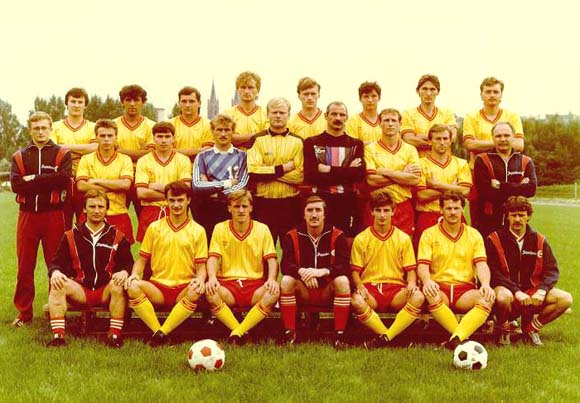 Jagiellonia (Bialystok) – 8th with 29 points. Considering that they still newcomers to the league, not bad at all. 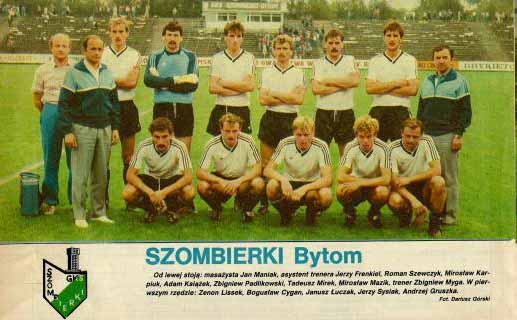 Szombierki (Bytom) – 7th with 29 points. By now, hardly anybody remembered that they were Polish champions at the turn of the decade – modest club, they almost immediately sunk down after winning the title, eventually relegated and spending some time in the Second Division. Now they were coming back – that is, not to glory, but to first level football and the whole aim was to stay there. 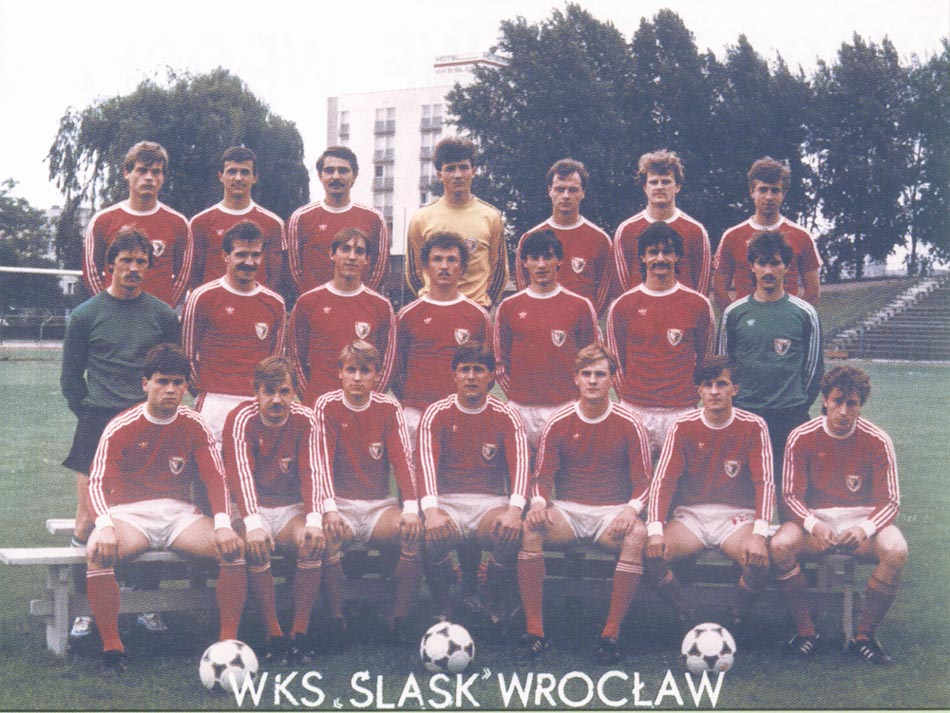 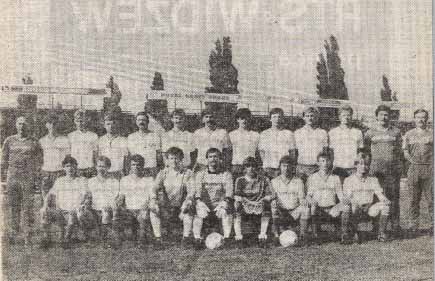 Widzew (Lodz) – 5th with 31 points. Not bad, but there great days were clearly over – it was just running on inertia. 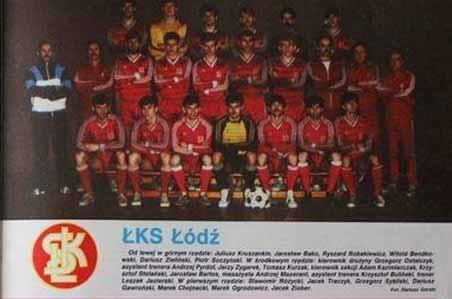 LKS (Lodz) – 4th with 39 points. Ahead of local rivals Widzew, which was great – as it is, LKS has been the better and somewhat stronger club in Lodz, until Widzew led by Boniek burst in and actually became much more successful in short time. But short time is short time… LKS was getting the upper hand already. Since the local rivalry was perhaps the strongest and most heated in Poland, it was just increasing and spilling outside the stadiums. 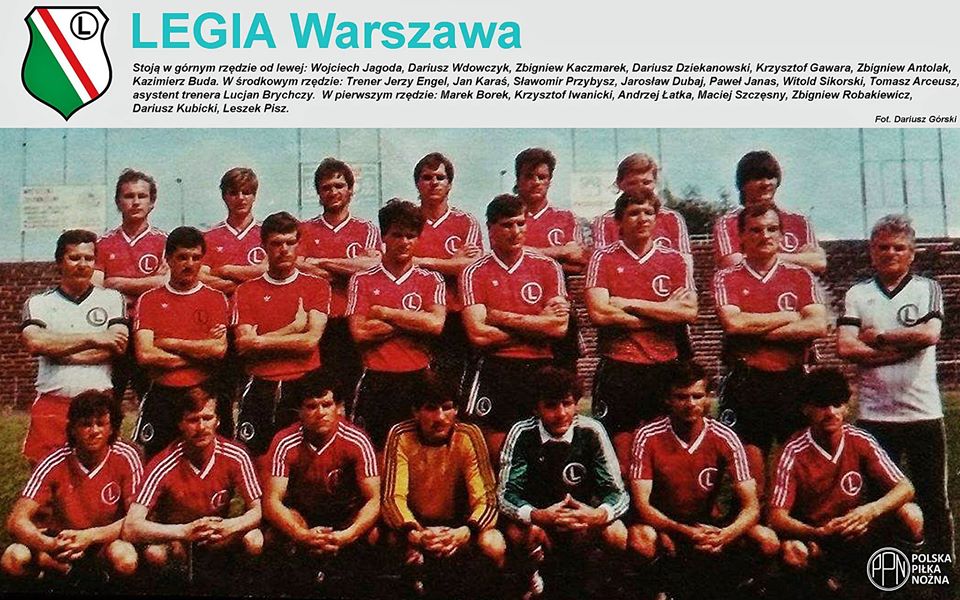 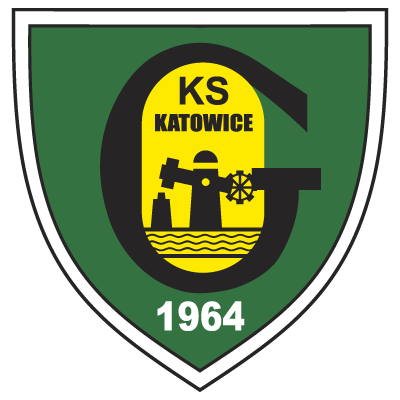 GKS Katowice -arguably, having their strongest period, but it was strong enough only for clinching 2nd place with 40 points. Not a title contenders. 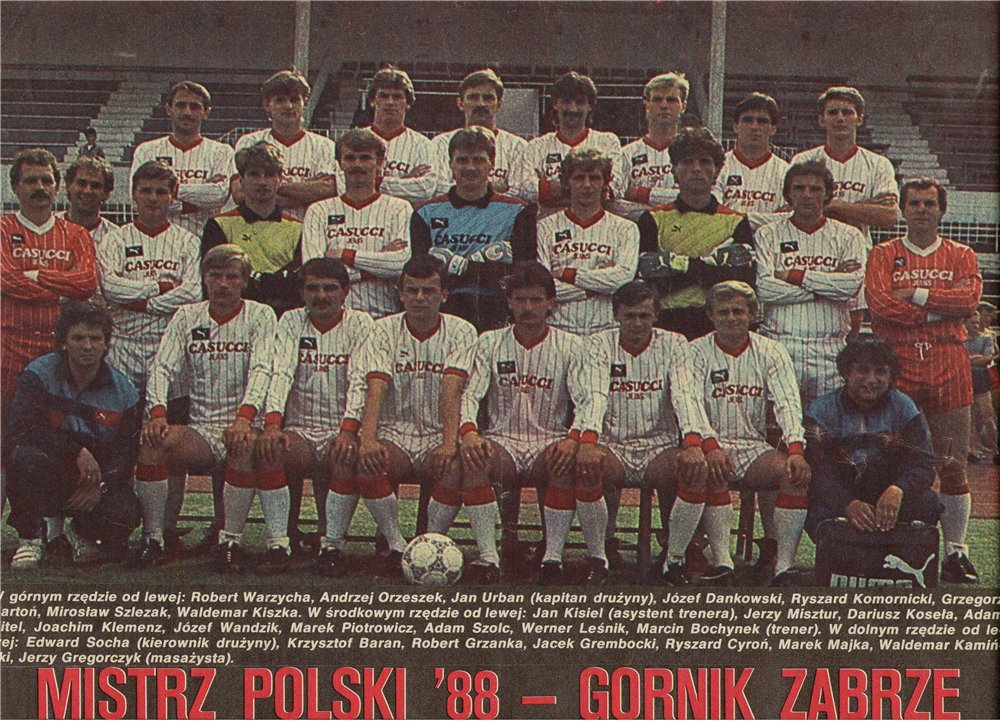 Gornik (Zabrze) – supreme and unchallenged champions for 4th consecutive year. Finished 11 points ahead of GKS Katowice! Let translate their final record: 13 ‘normal’ wins, 6 wins by 3 or more goals, giving them extra point for every one, 7 ties, 0 losses by 3 or more goals, 4 ‘normal’ losses. 13X2, 6×3, 7×1 – 51 points. No deducted point, for they were never beaten by 3 goals difference. Scored 65 goals (the next best scorers were GKS Katowice and LKS Lodz with 40 goals – a comment on the new rule really: it was not exactly changing anything), allowed 30 goals (10 teams had equal or better defensive record – another comment: attacking football clearly won the day, but at the price of leaky defense. So… better not permitting goals than scoring). Gornik was not just superior – it was their 4th consecutive title and 14th altogether. As the things looked, they were clearly going to at least equal and very likely break their record of the ‘golden’ 1960s, when they won 5 titles in a row. The forecast was ‘ironclad’: Ruch (12 tittles at the end of this season) and Wisla (6 tittles), the nearest rivals, were just coming back from Second Division and it was unlikely they recovered sufficiently to challenge Gornik. Legia, the steadiest team in Poland, not only had 4 titles, the last won in 1970, but were somewhat ‘cursed’ with constant failure – no matter how good a team they had, they somehow always failed to win the championship. Widzew was seemingly going to a period of decline, Lech was up and down, not a real rival currently, GKS Katowice was unlikely rival too – traditionally, they were not successful. Gornik was in perfect position: excellent team by Polish standards (traditionally, in Poland the best players were dispersed in various clubs and having 5-6 stars was enough to dominate – Gornik had that and only Legia seemingly had similar squad) and the other ‘big’ clubs were either in decline or rebuilding and trying to come back from a decline. Hard to see anything stopping Gornik in near future, even ever increasing exodus of players to foreign clubs was not dangerous – Gornik had younger stars, not yet at their prime and even if some went abroad, it was easy to replace them – playing for the champions was attractive to talent in other clubs. So it looked… and it was all wrong. 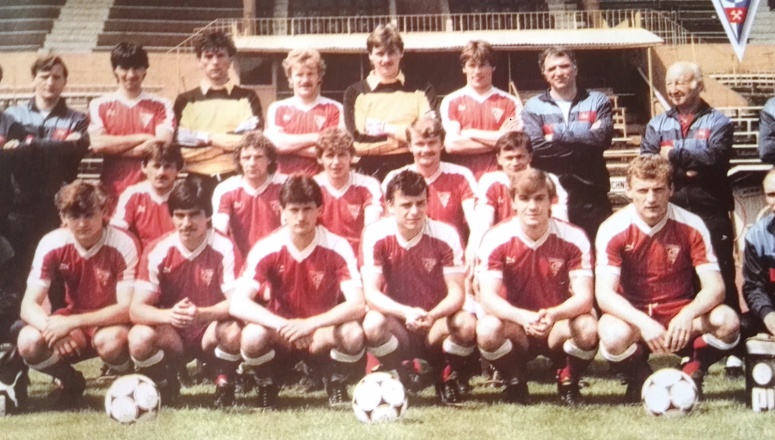 The future had a nasty surprise and for that reason this team deserves a second look: a look of the last Gornik team winning a title. Instead of new records – nothing! To this very date, Gornik did not win another championship. 30 years passed since and Gornik was unable to win the 15th title. Yet, they were still the most successful club in Poland – only they are no longer alone, they share the record with Wisla and Ruch and Legia are close with 13 titles today. Anyhow, this is the squad which won the last title for Gornik.