Cup Winners Cup. As usual, few surprises in this tournament and most of them due to the draw. The 1987 finalists 1.FC Lokomotive (Leipzig) was eliminated in the first round – but they lost to Olympique Marseille and only 0-0 and 0-1. In the 1/8 finals Hamburger SV was eliminated, but again it was a tough draw: they played against Ajax (Amsterdam) and lost both legs 0-1 and 0-2. Real Sociedad also fell victim of the draw, to a point: Dinamo (Minsk) eliminated them on away-goal – 1-1 and 0-0. Hajduk (Split) was another team with a tough luck – they played against Olympique Marseille and lost heavily away – 0-4. Recovery was practically impossible and they won only 2-0 at home, but crowd violence eliminated even this small comfort and UEFA awarded 3-0 win to the French. The only tough duel – or rather one between equals, making difficult any prediction – was between Atalanta (Bergamo) and Sporting (Lisbon). The Italians prevailed thanks to 2-0 home victory and 1-1 in Lisbon.
The ½ finals opposed Ajax to Olympique Marseille – the reigning Cup holders won the first leg in Marseille 3-0 and the second leg was more or less meaningless. The French won it as a consolation – 2-1 – but Ajax went to the final. The other semifinal, at a glance, was one more draw blemish: Atalanta vs Belgian KV Mechelen. The supposed weaker clubs had to play between themselves instead of facing the stronger, which made the other pair. The Belgians won both legs with the same result – 2-1. 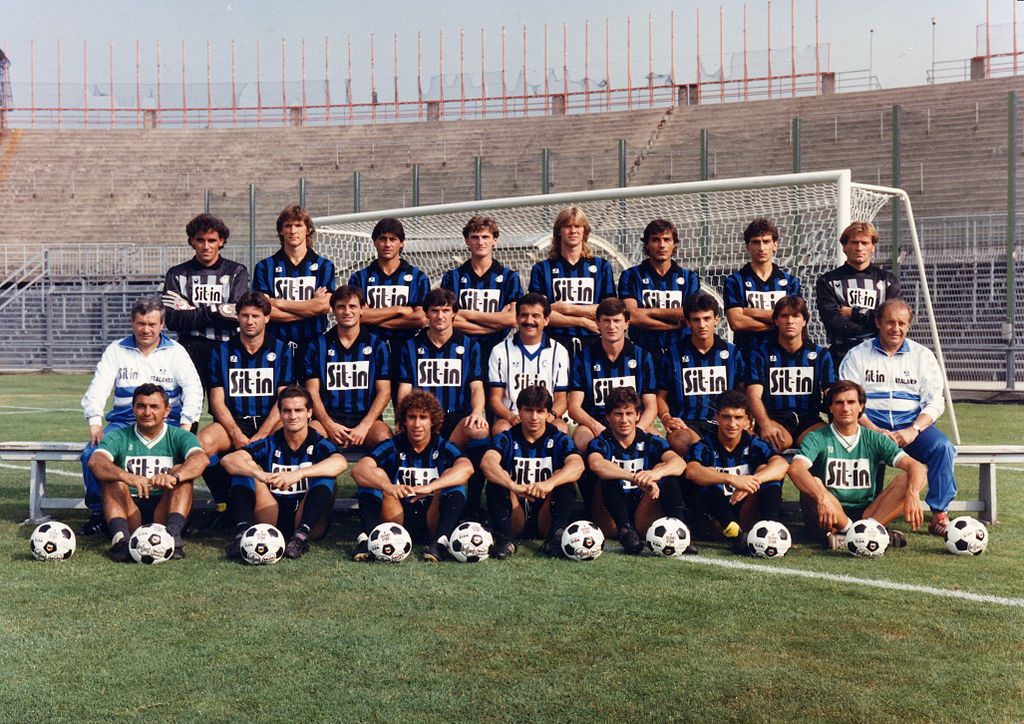 Note the achievement of Atalanta – they played in Second Division, yet, reached the ½ finals of the Cup Winners Cup and perhaps with a bit of luck could have been at least finalists, if not winners.
Thus, the 1988 final was to be played between neighbours of very different standing: famous Ajax, having a great team at last, and seemingly on the road of repeating its great success in the first half of the 1970s vs little known, modest Belgian club, which popped out of the blue and now had a chance to win the trophy against the whole ‘wisdom’ of the 1980s – money ruled and small clubs had no chance to win anything. Both finalists had splendid campaigns so far: Ajax eliminated Dundalk 4-0 and 2-0, Hamburger SV 1-0 and 2-0, Young Boys 1-0 and 1-0, and Olympique Marseille 3-0 and 1-2. They lost only one match and received goals also in one match – which was meaningless one, so it was almost perfect record. KV Mechelen eliminated Dinamo (Bucharest) 2-0 and 1-0, St. Mirren 0-0 and 2-0, Dinamo Minsk 1-0 and 1-1, and Atalanta 2-1 and 2-1 – they were unbeaten all the way to the final.
It was natural so see Ajax as favourite – the pedigree, history, new exciting team, ambition to comeback and to win a second consecutive Cup Winners Cup. KV Mechelen was the underdog, but it was Belgian club and the old rivalry with the Dutch and excellent form pretty much neutralized whatever advantages Ajax had – Belgians traditionally were very difficult opponent to Holland making one hesitate favour Ajax. Yet, class and tradition was in their favour – after all, Ajax won the tournament in the previous years and the team was fantastic. True, Marco van Basten left to play in Italy and also their coach Cruijff departed, leaving as usual a mess after himself – Barry Hulshoff was hastily elevated to coaching position and if anything had the chance to prove his own worth. As for van Basten – Bergkamp was already at hand. A new strong defender – Peter Larsson – was added from IFK Goteborg. Mechelen had its own great Dutch coach – Aad de Mos, few ambitious Dutch players eager to prove they were not bellow the stars of their own country and Erwin Koeman played along with Ajax’ stars in the national team of Holland. Add a handful and Belgian national team players, led by wonderful goalkeeper Michelle Preud’homme and the Israeli national team star Ohana. The team had suspect short temper and often finished a game with less than 11 players – a handicap taken in mind, although the final contradicted it. 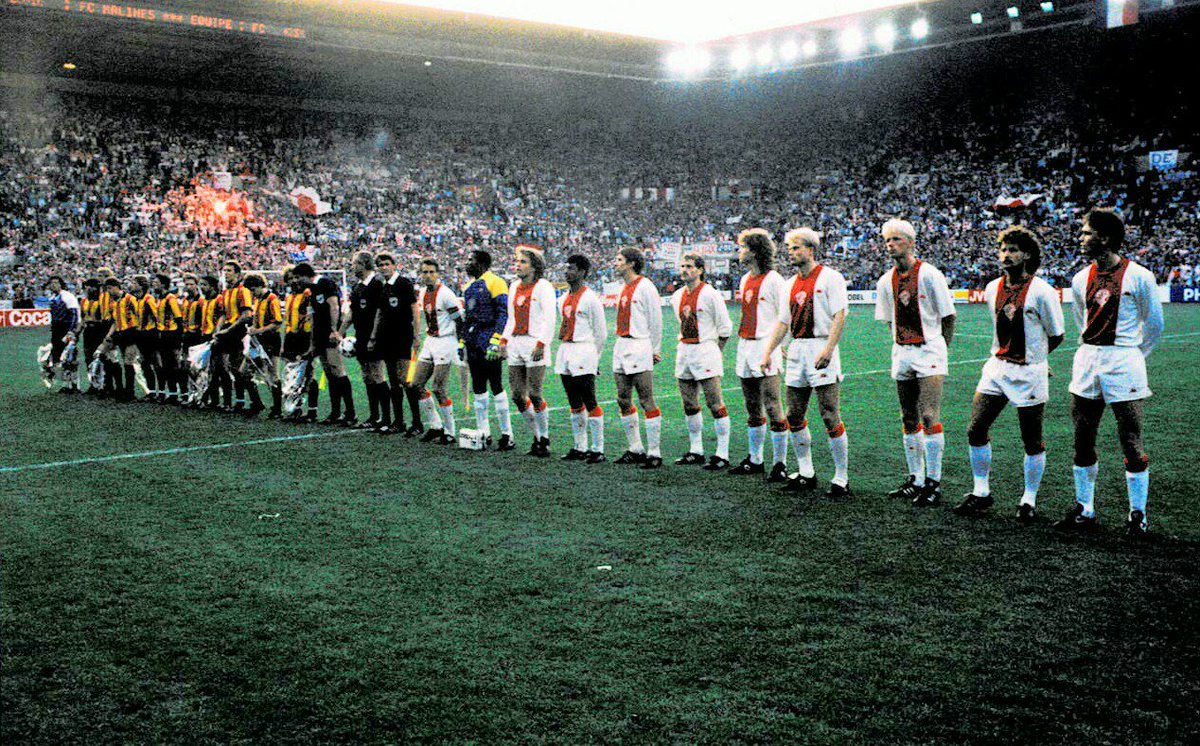 The finalists lined up in front of 40 000 supporters in Strasbourg, 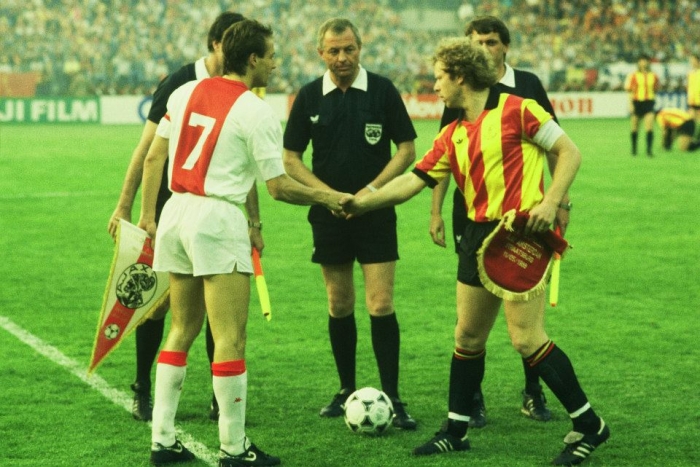 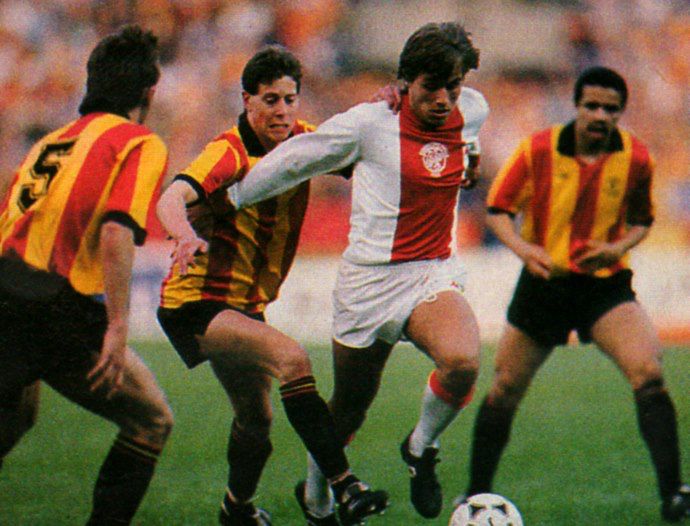 And what a dazzling match it was – both teams attacking in breathtaking speed. It was more exciting and entertaining match than the European Champions Cup final, keeping everybody on tiptoes from start to finish. 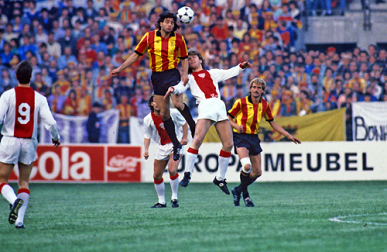 KV Mechelen was more than a match to mighty Ajax- they played fierce game, occasionally more creative and dangerous than Ajax. 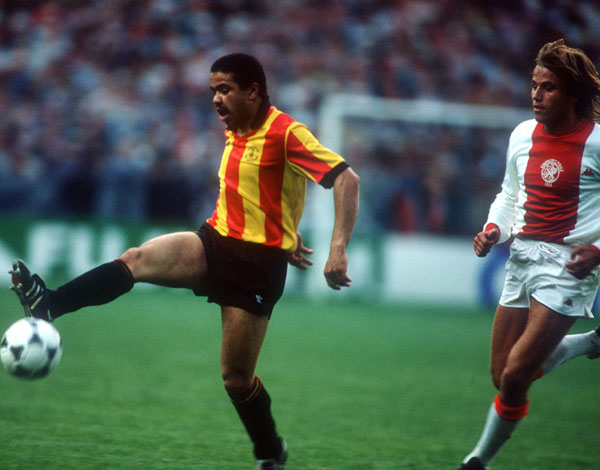 Not famous, but hardly lesser players than the Dutch – here it was de Wilde making trouble. 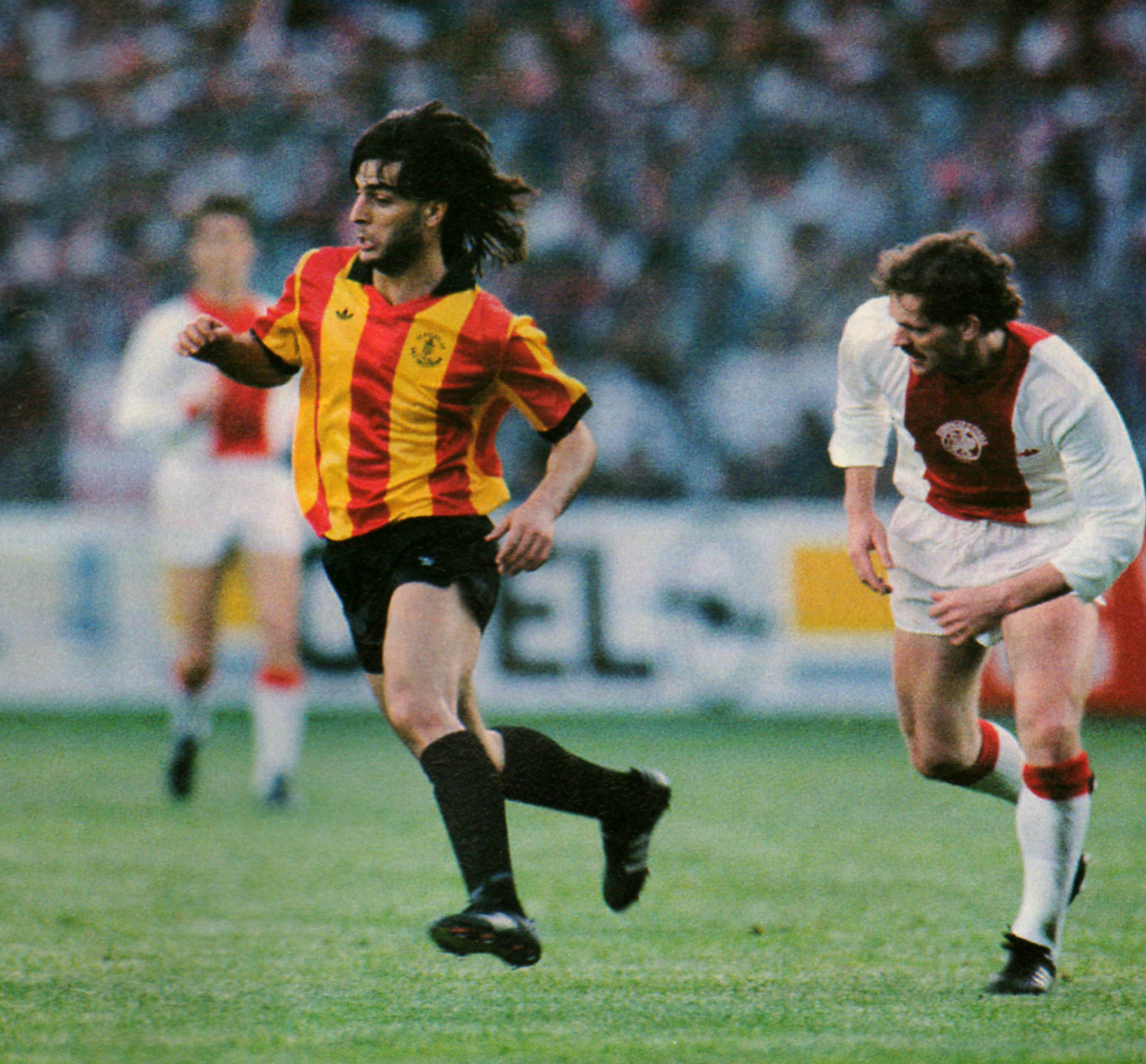 And Ohana was very difficult to guard. 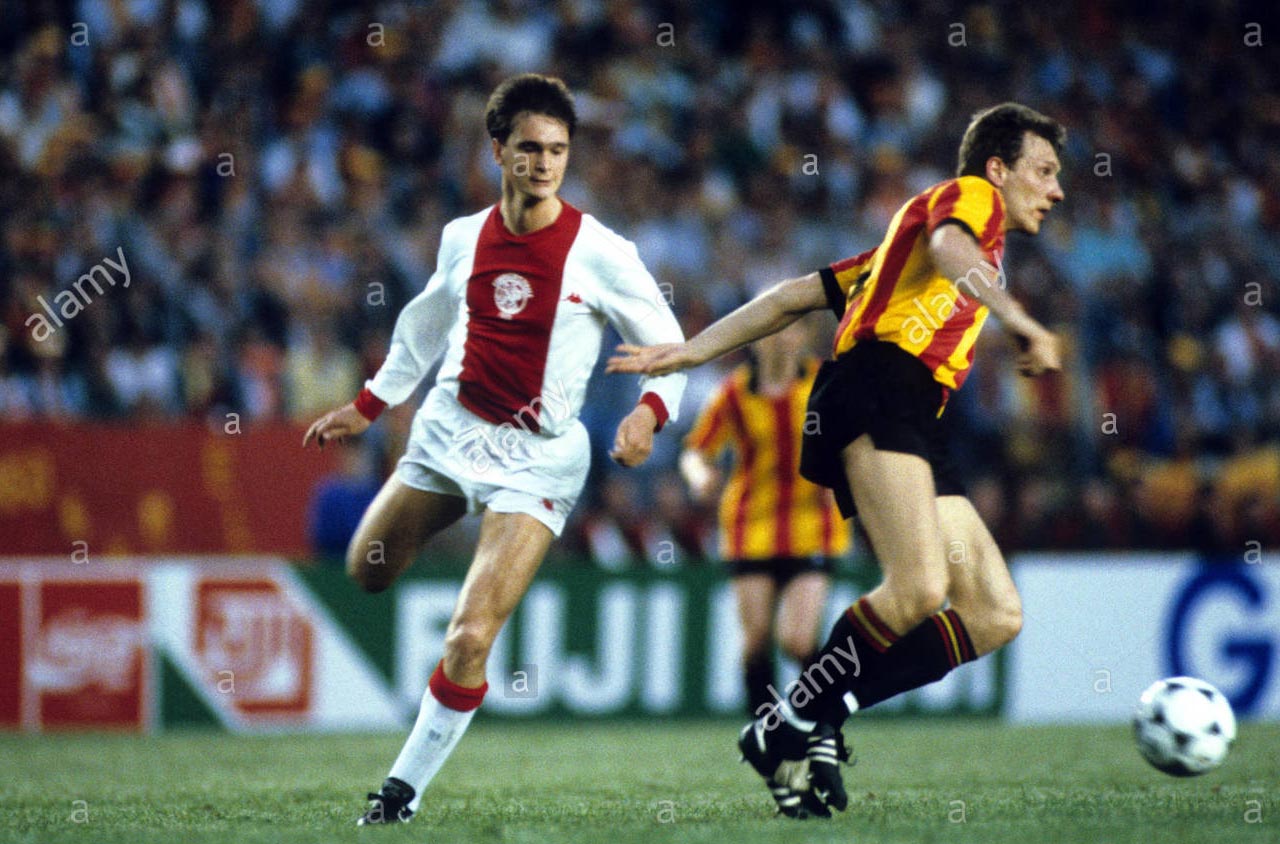 There was no way to tame Mechelen. 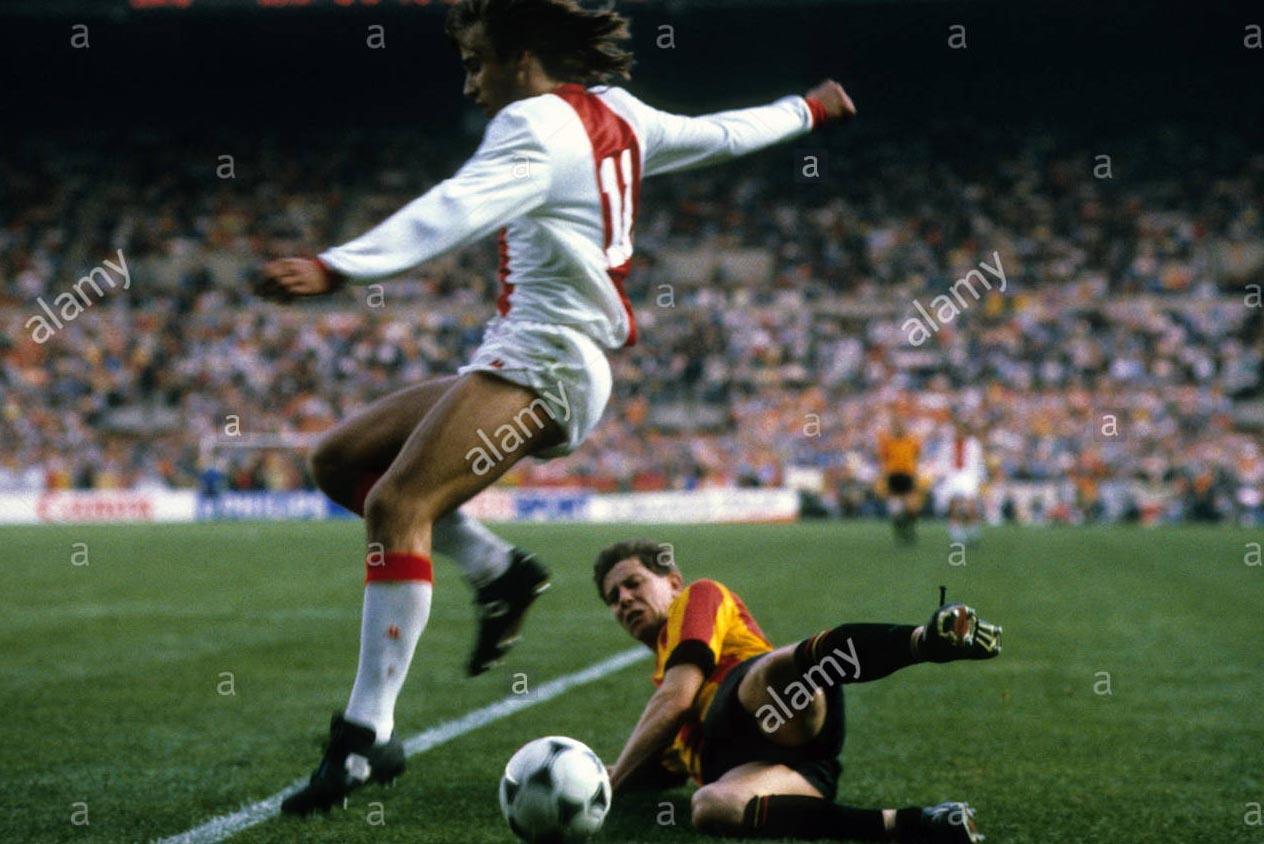 Of course, Ajax was not toothless, but Belgian defense was alert and competent. There was a suspicion for penalty not given for Ajax early in the early minutes, yet as a whole Mechelen created more dangerous moments in front of Menzo. 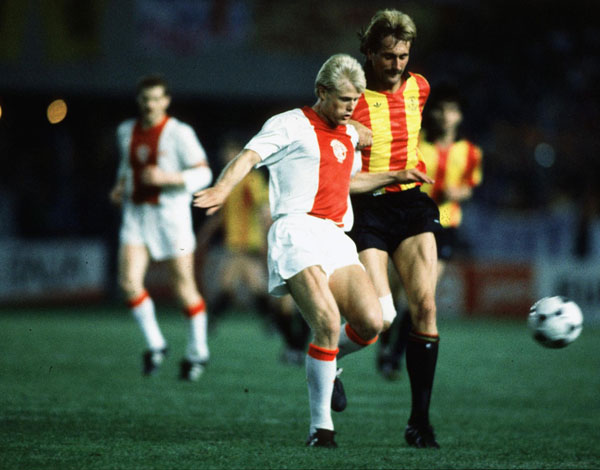 The opponents were well matched, neither giving way, neither prevailing. 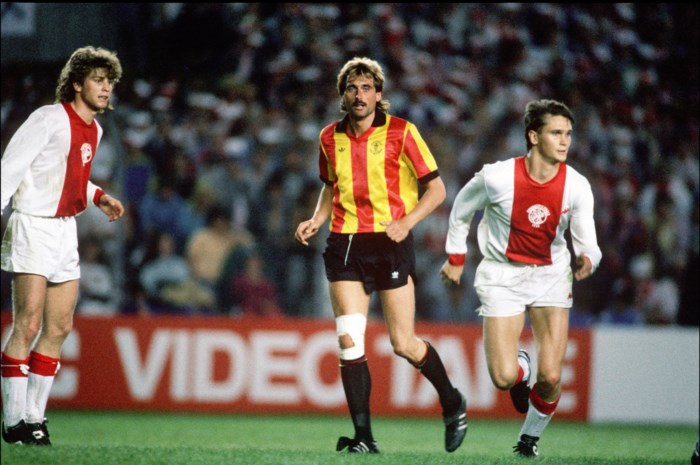 A final worth watching, a game spectators crave for. And it was not risky Mechelen losing a man, as expected, but Ajax – Danny Blind brought down Clijsters in the 16th minute and was sent off. Well… the English TV commentator expected yellow card in the spirit of the 1980s, when nobody saw red short of murder, but it was pure and clear red: a great counterattack left Clijsters one on one with Menzo. It was still quite away from penalty zone, but it was 100% scoring position and Blind hardly had any other option, but to bring down the Belgian. Mechelen did not score from the free kick, but Ajax was left with 10 men – and it did not show, they played as well as before. 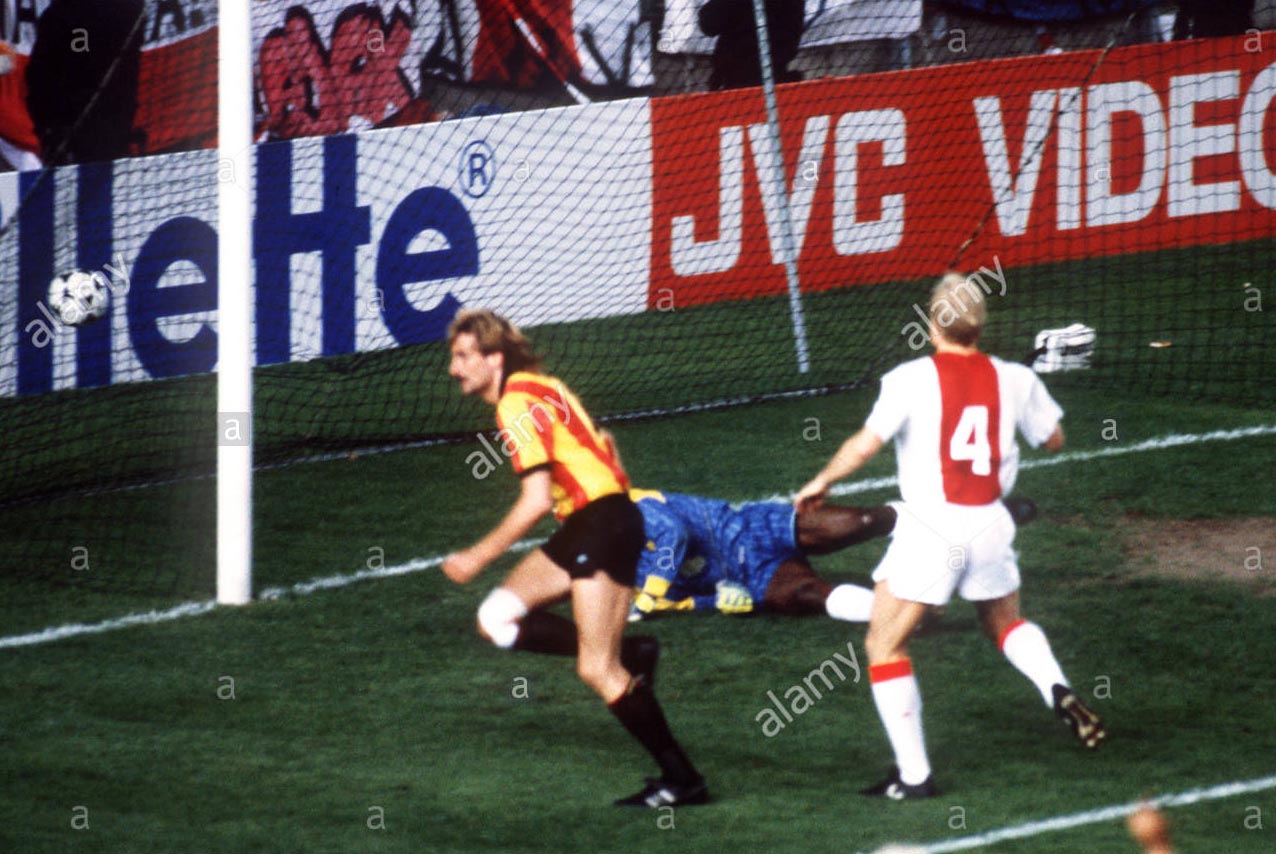 It was more a matter of chance than anything and Mechelen used their own in the 53rd minute when den Boer scored a great goal, finishing lethal attack with a header. Ajax tried and tried, but no luck and Preud’homme was solid as a rock. It was still 1-0 at the final whistle. Modest KV Mechelen won one of the most memorable finals of the 1980s! 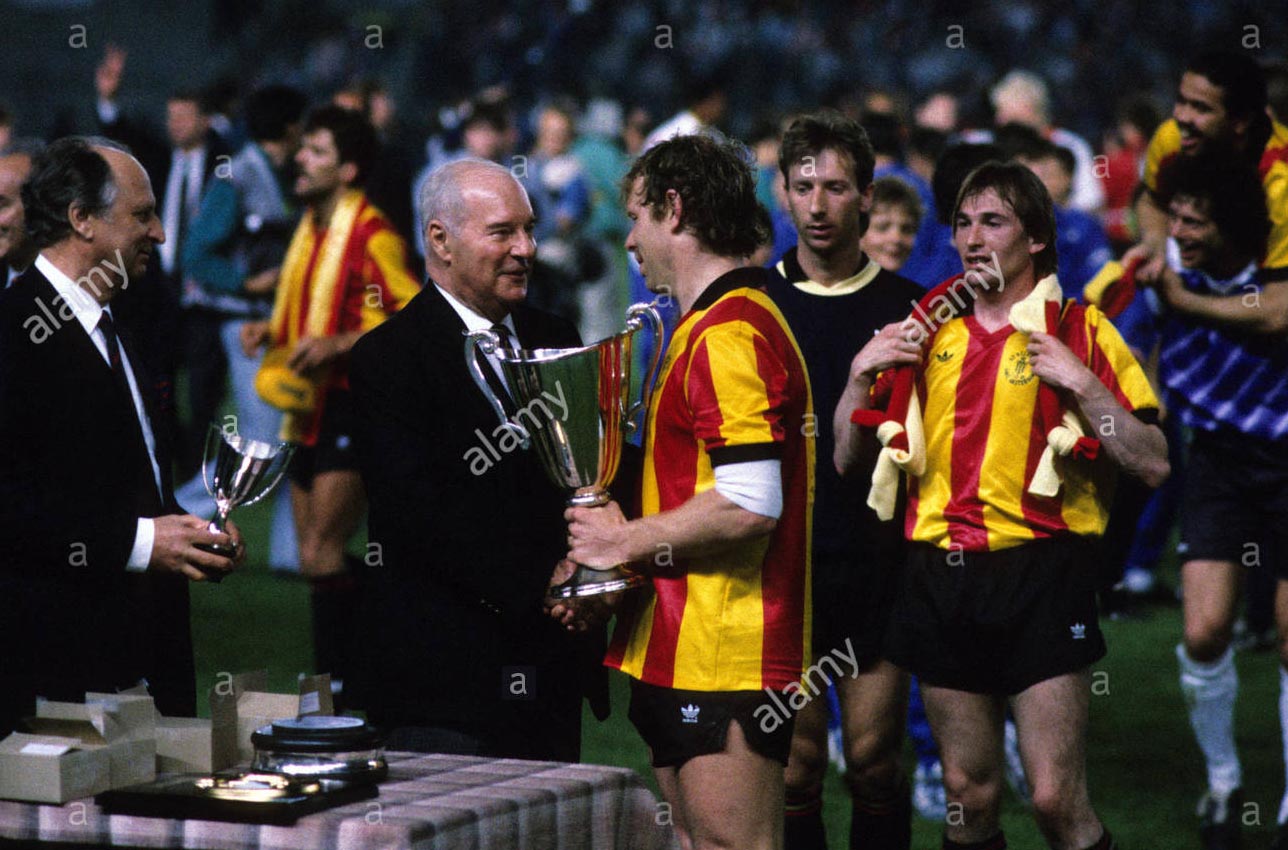 Getting the Cup Winners Cup – what a moment! 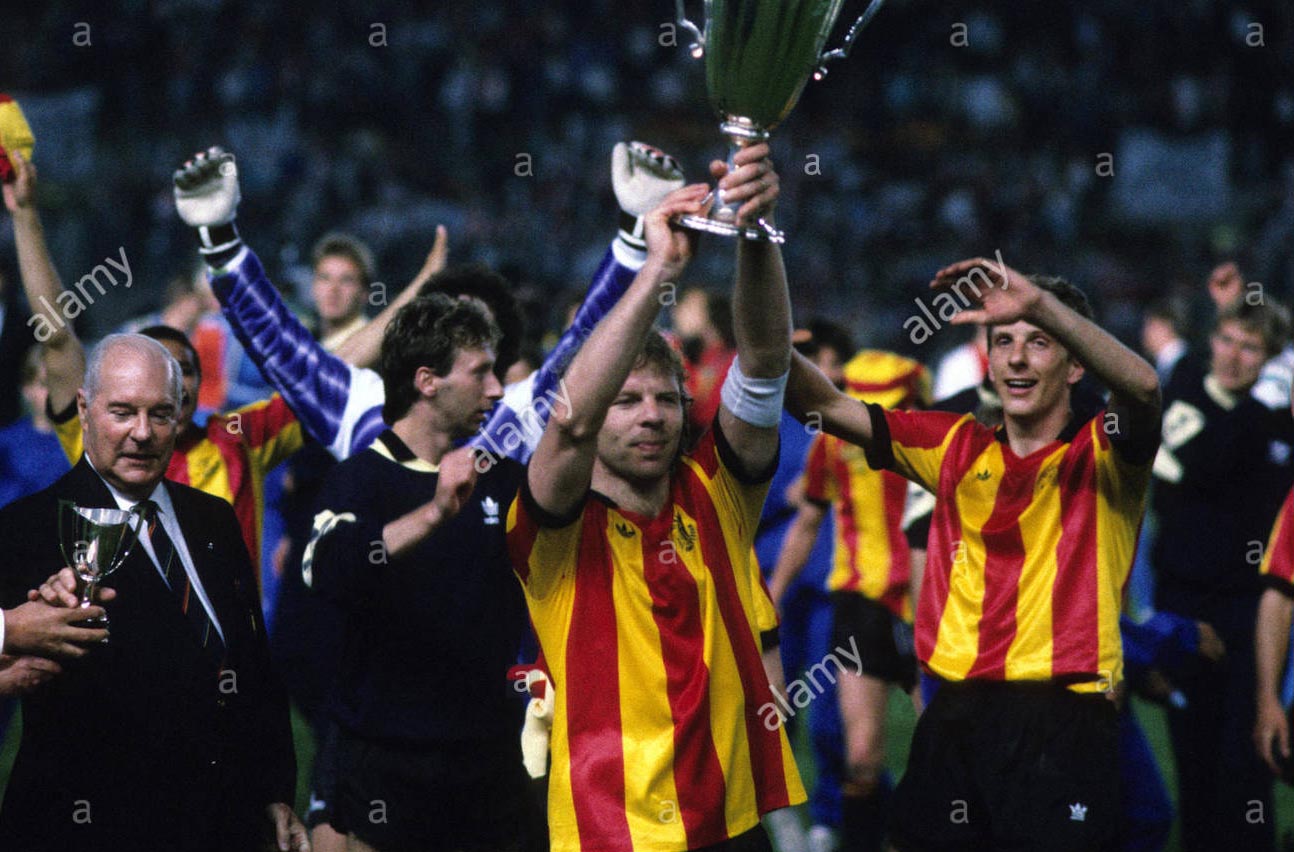 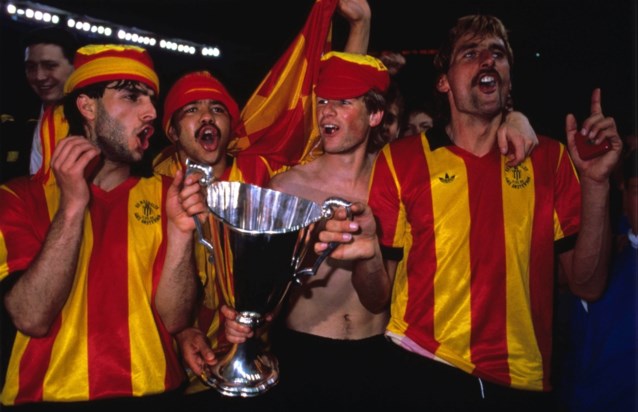 Tiny Mechelen making the round of triumph. 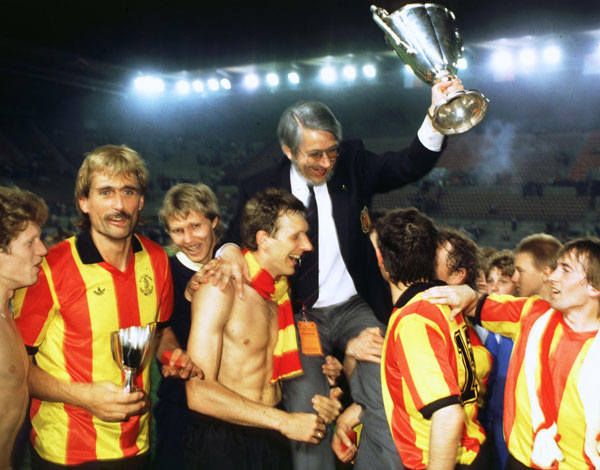 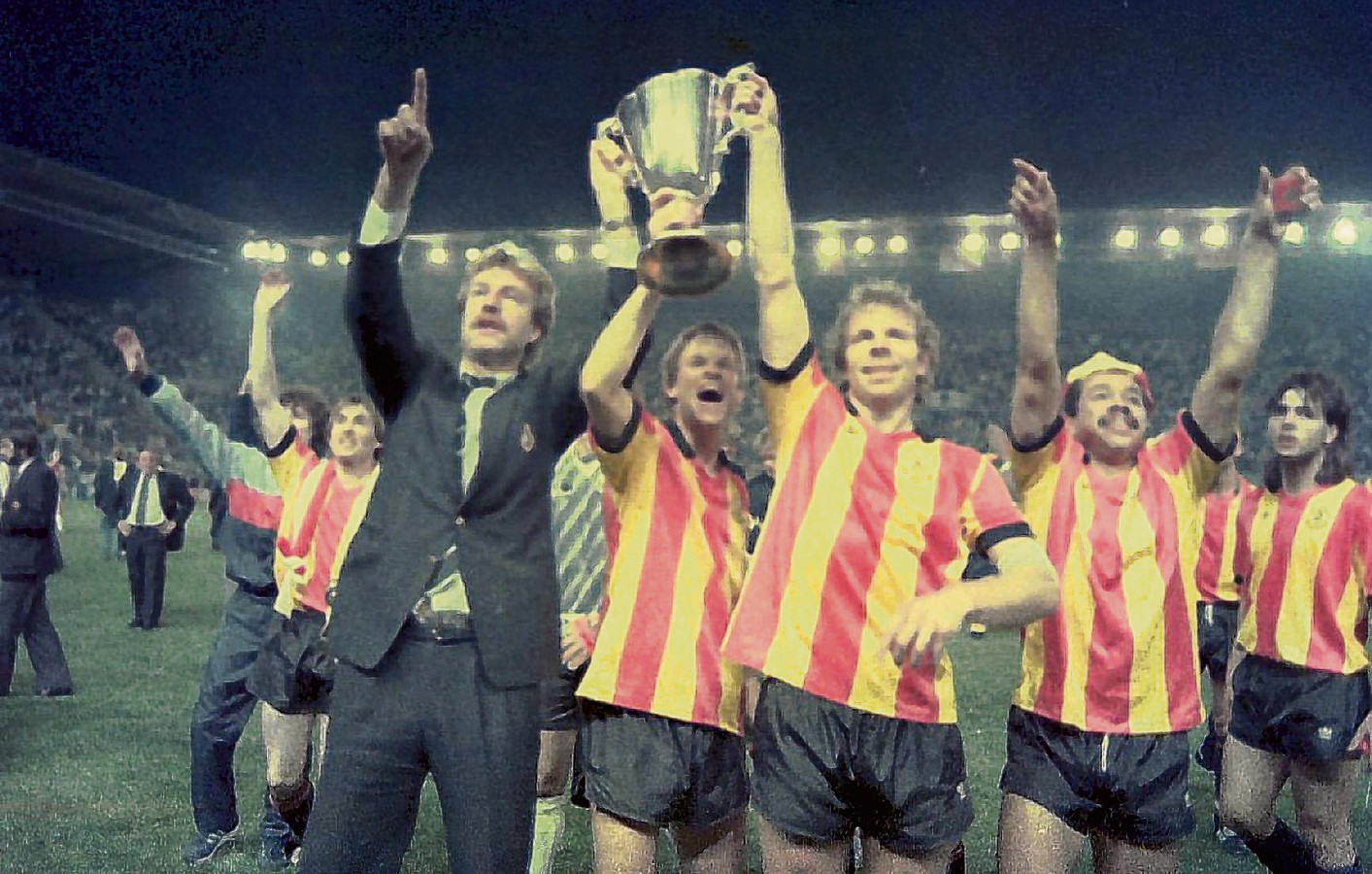 Aad de Mos – the mastermind of the victors, a Dutch beating the Dutch. 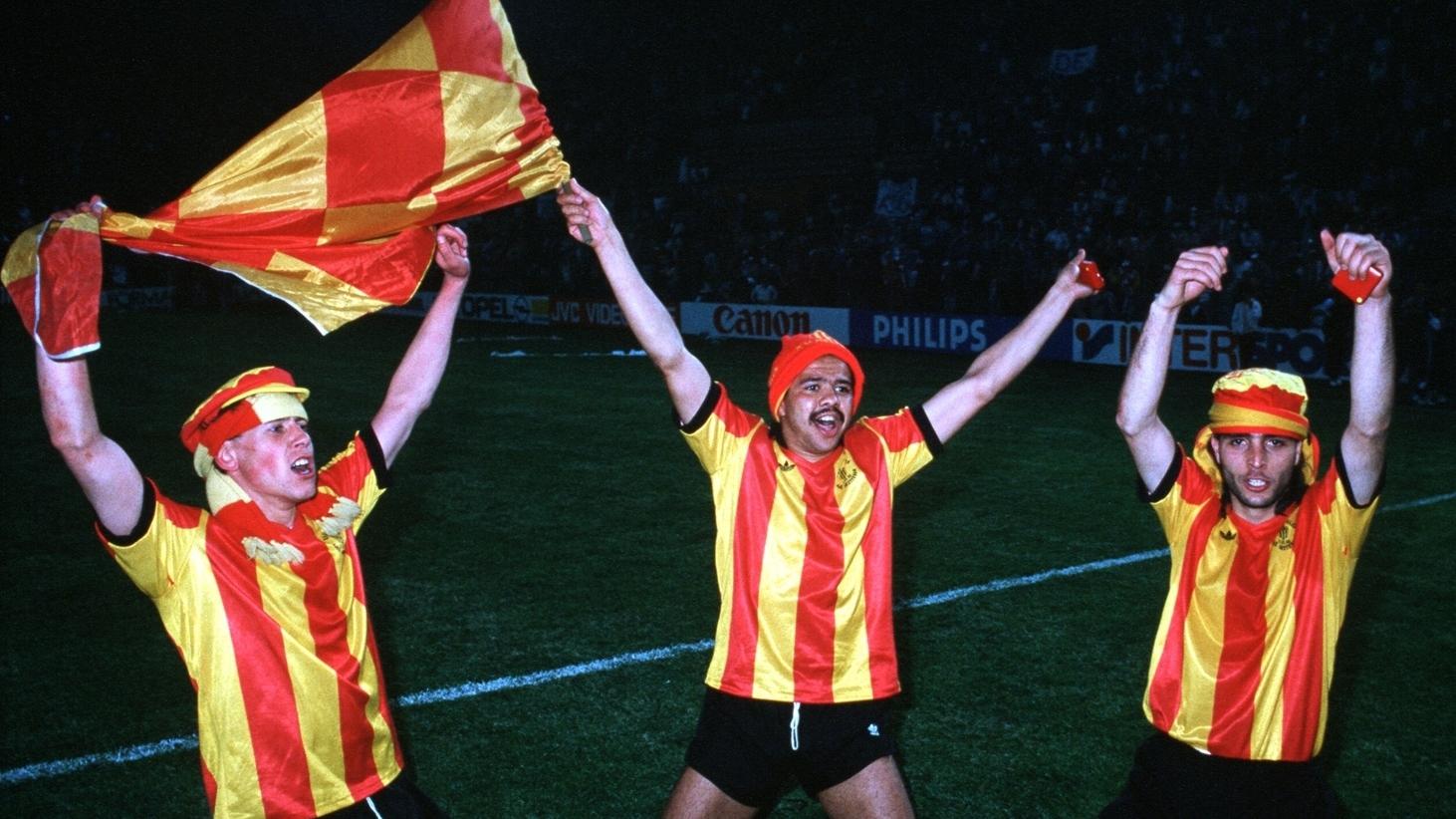 Happy winners – de Wilde, in the middle, was unable to finish the final because of injury, but the Cup was his! 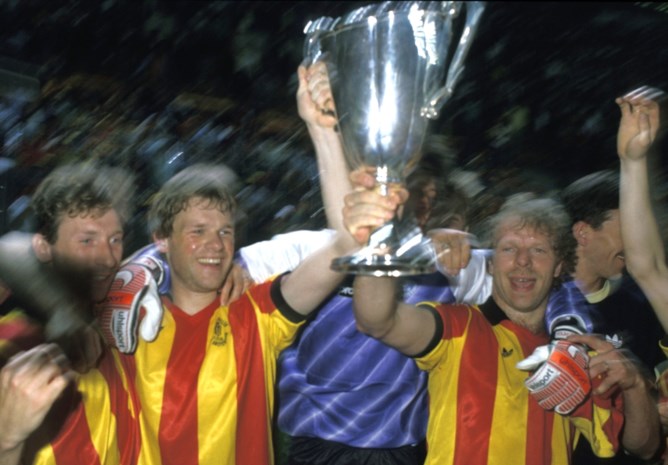 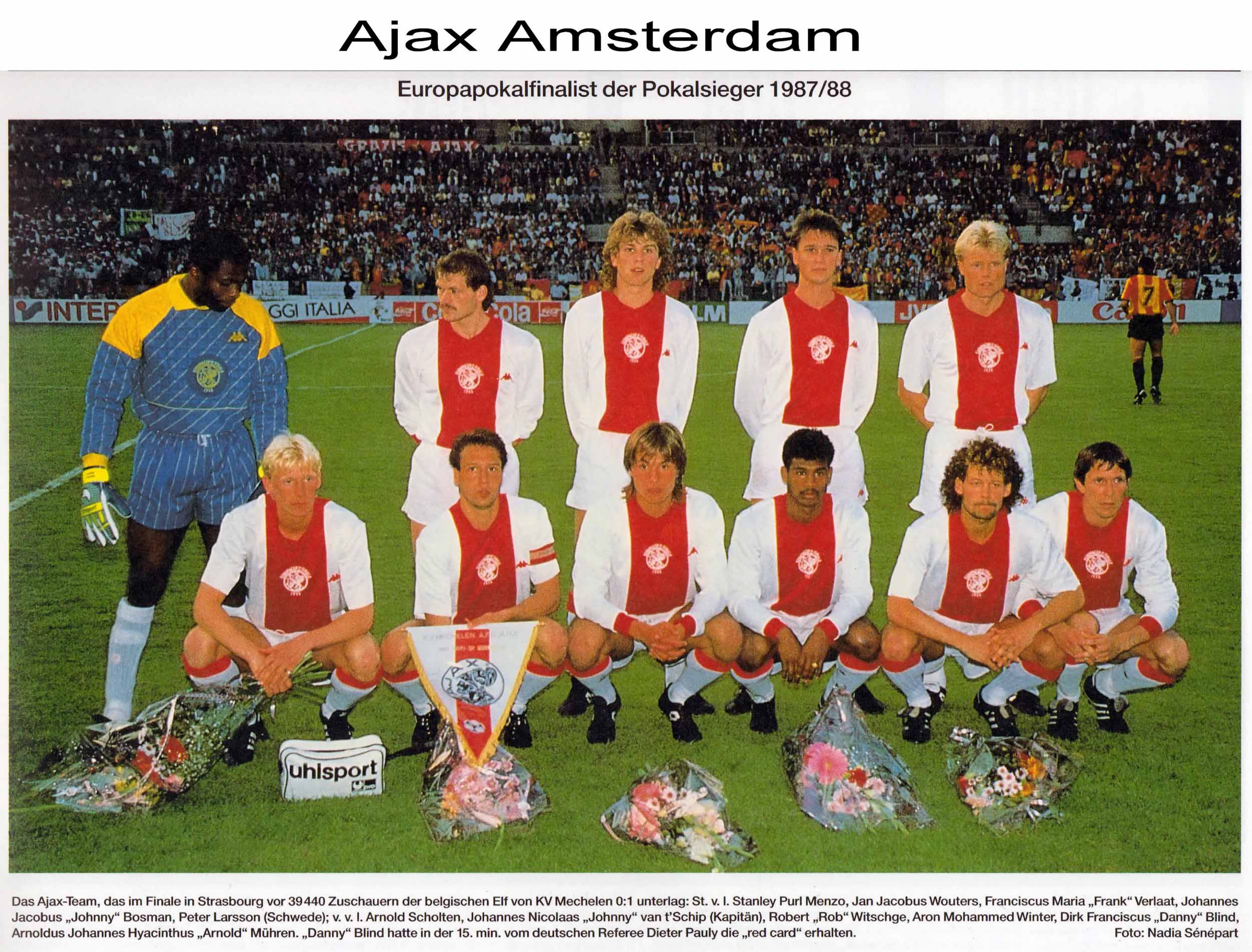 It was sad to see such wonderful team to lose. A team bursting with talent – Dennis Bergkamp was not even a starter, let alone few others sitting on the bench. Sad for Arnold Muhren unable to add one more trophy at the end of his career. Sad it was, but Ajax lost to equally good team – it was not losing to boring and scheming opponent. Unfortunately, this final clipped the wings of squad and ended prematurely the second great period in the history of the club – this was a squad expected to repeat the success of Ajax of the early 70s, certainly it had the talent and the flair. It also practically ended the career of Barry Hulshoff as a coach. Let say coach Hulshoff was not a match to player Hulshoff, let say Ajax politics were to blame for it to a point – true, Cruijff was never easy to work with, but the club should have hired strong replacement when Cruijff left the club to join Barcelona again. Or may be they should have appointed experienced Spitz Kohn as a head coach – if anything, he made the successful Twente team in the early 70s and worked as assistant coach of Ajax already. Instead, they put the other Cruijff’s assistant as an interim coach… it was quite clear that Hulshoff is temporary solution, something hardly expiring anybody. Now they lost, Hulshoff was easily blamed, he was a convenient scapegoat. At least at the final Ajax did not show any shortcomings because of Hulshoff – they played the same exciting attacking football as taught by Cruijff and it was the same team (minus van Basten and plus Larsson). Frankly, it was club politics to blame not that much for the lost final, but for cutting short the ascent of the squad – the ghost of cheap decision came back: in 1973 they replaced Kovacs with suspect coach and that who killed the great team, now they replaced Cruijff with similarly weak coach and lost the future. 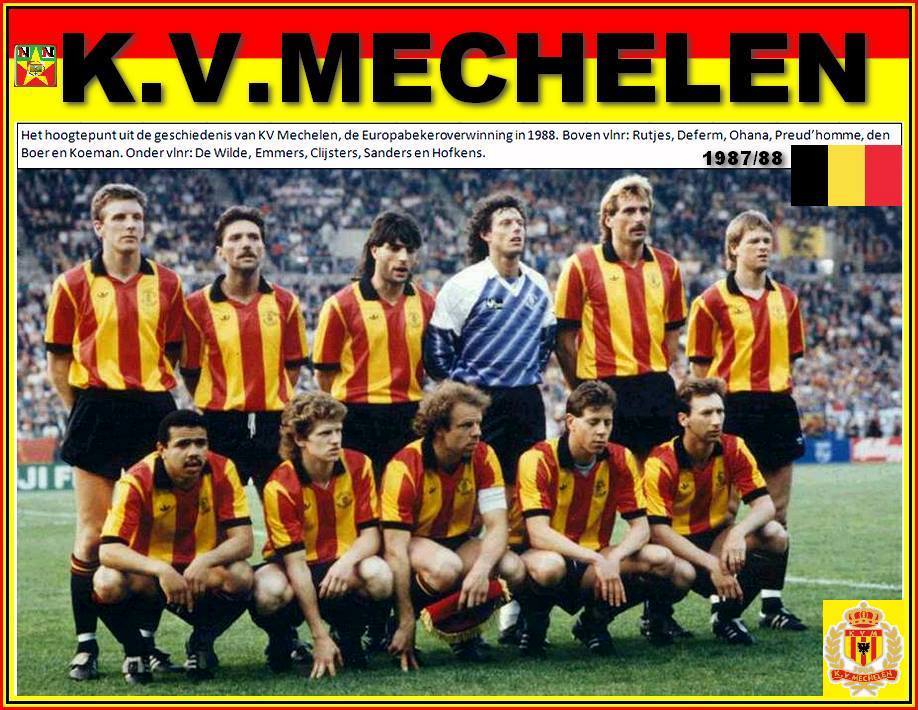 Of course, it is always great to see the underdog win. Against the odds and so on, but the victors truly deserved the glory. And not only because second-raters prevailed over stars – Mechelen played exciting football, they were at least equally good as their opponents, showed no fear, tried no dirty tricks. Not famous, thus, nobody paid much attention to them previously, but the club was carefully building the team and shaping it for a number of years – what we saw in 1988 was the polished product of years of work. Of course, the club had no means to hire big stars, but they used their money wisely – let point out that Michelle Preud’homme had little chance to become number one in the Belgian national team at the time. He was somewhat second-best and it was easier to get him when nobody was really looking. But before him Mechelen had another unfortunate ‘second-best’ – Theo Custers captained them, back from a spell in Spain. Both goalkeepers stayed in the shadow of Pfaff for years, Preud’homme was younger and better keeper than Custers. Mechelen developed this way, with some players making the core of the team for some years. A good coach was hired too – Aad de Moss, like his players, was somewhat second rank so far. So was Erwin Koeman – he reached the Dutch national team thanks to his performance for KV Mechelen. Eli Ohana was really noticed because of his playing for Mechelen – an Israeli national team player, but Israelis were not considered first rate players in Europe. The other Dutch players were outside the interest of big clubs in both Holland and Belgium – yet, den Boer scored the wonderful winning goal and none was bellow the standards of up and coming great stars of Ajax. KV Mechelen came out of the blue to European glory, but they deserved their success. And at the end it was not Ajax getting players form the underdog but the other way around – it was Johhny Bosman, number one striker of Ajax so far (rated above both van Basten and Bergkamp in the club), joining KV Mechelen after the final. It was impossible to think KV Mechelen would stay on top of European football for long – they were too small to compete with the money Spanish and Italian clubs had, or the Germans, or even their domestic rivals like Anderlecht and FC Brugge, but they were not one-time wonder either: small the were, but lovely, carefully made and keeping level head. Frankly, one of the best things happening in European football in the 1980s and one of the most optimistic sides during bleak years of ugly tactical football – entertaining attacking team, playing with imagination and skill. Proving that football was not going to die. 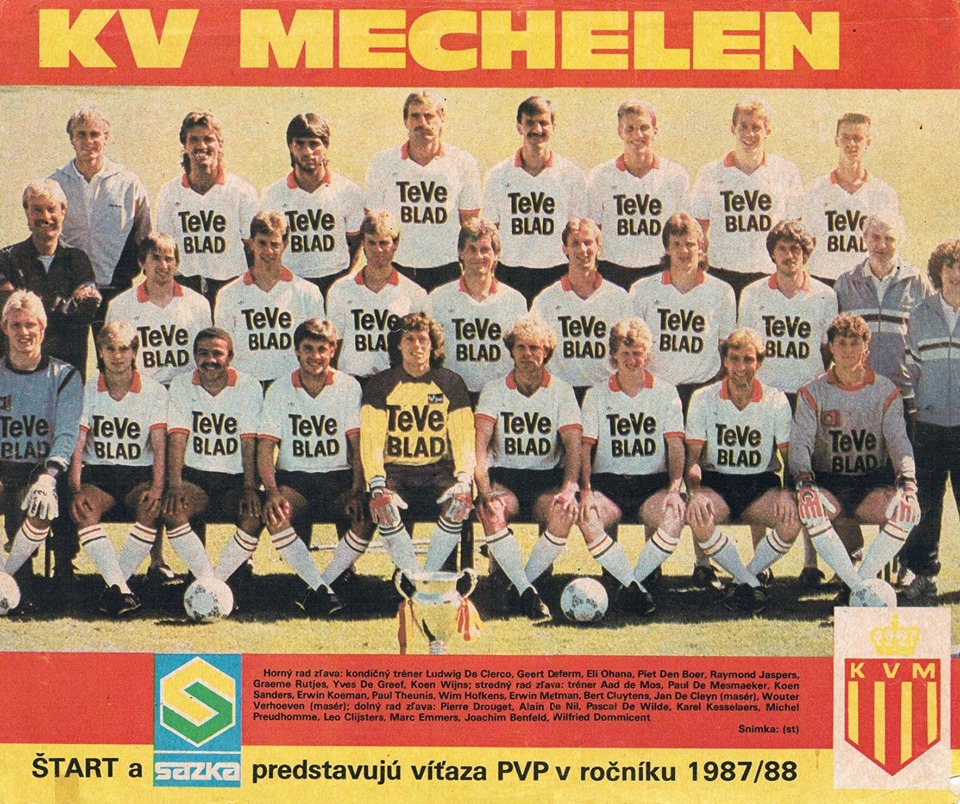 These lovely winners deserve one more look – this time the full squad! The wonder to do more with less.