First Division. One team dominated the championship, so it was more interesting on the bottom – 6 teams were relegated from the recently enlarged to 20 teams league. 2 outsiders settled at the very bottom, but there were 4 more dreaded positions and 8 teams fought to escape them. Thus, half the league was concerned only with survival and goal-difference decided the fate of some. 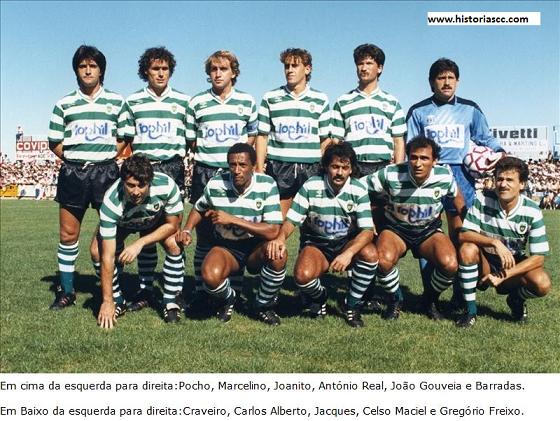 Sporting Covilha was the season’s outsider – last with 21 points. 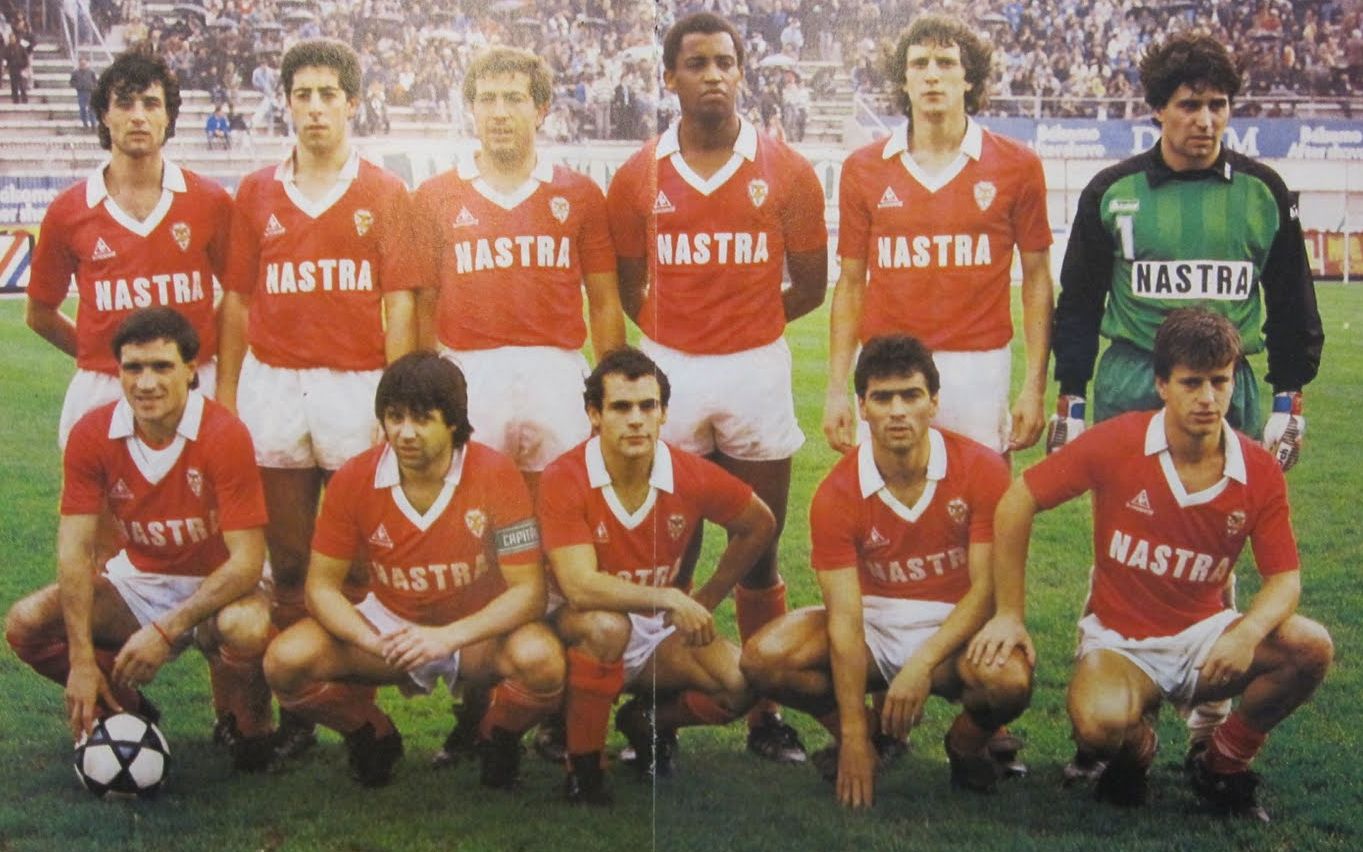 Salgueiros was quite stronger than Covilha, but still an outsider – 19th with 25 points. 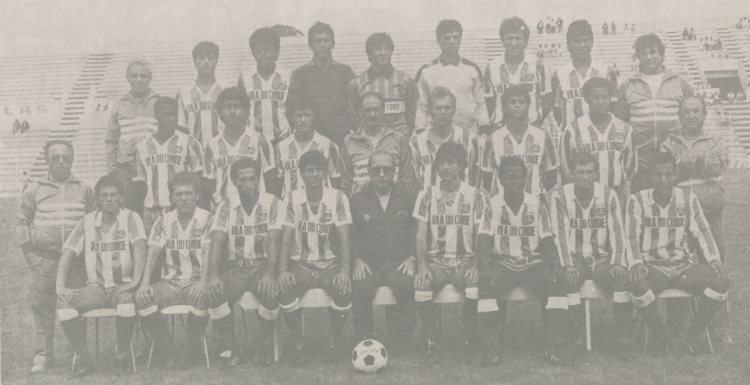 Rio Ave – at the bottom of those pretty much equal teams fighting desperately to avoid relegation. Rio Ave was among the losers of the race: 18th with 28 points. 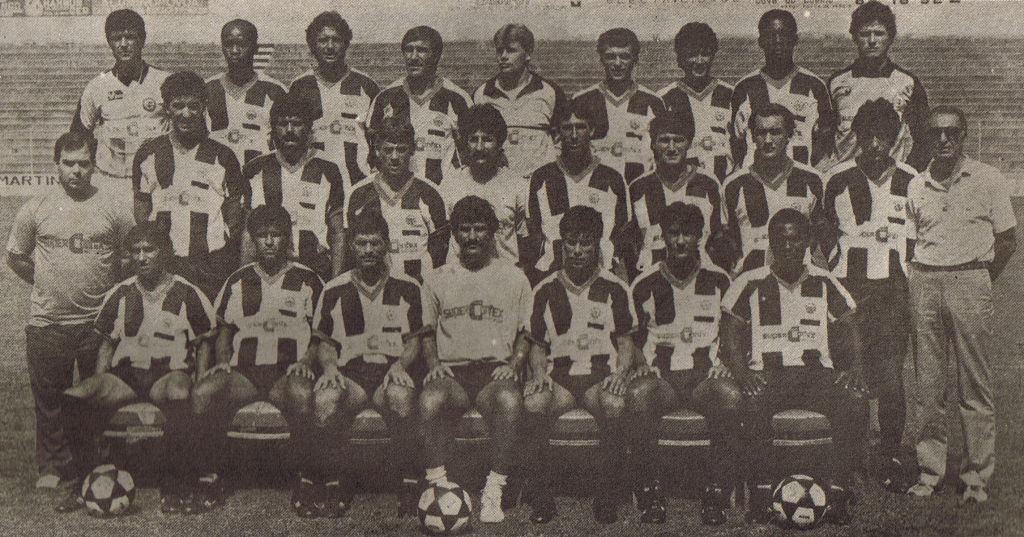 Elvas – or O Elvas – was the last unfortunate: 15th with 33 points. Goal-difference sealed their sorry fate: a matter of 2 goals. That was the group of relegated teams – the biggest number of teams relegated from European top league. 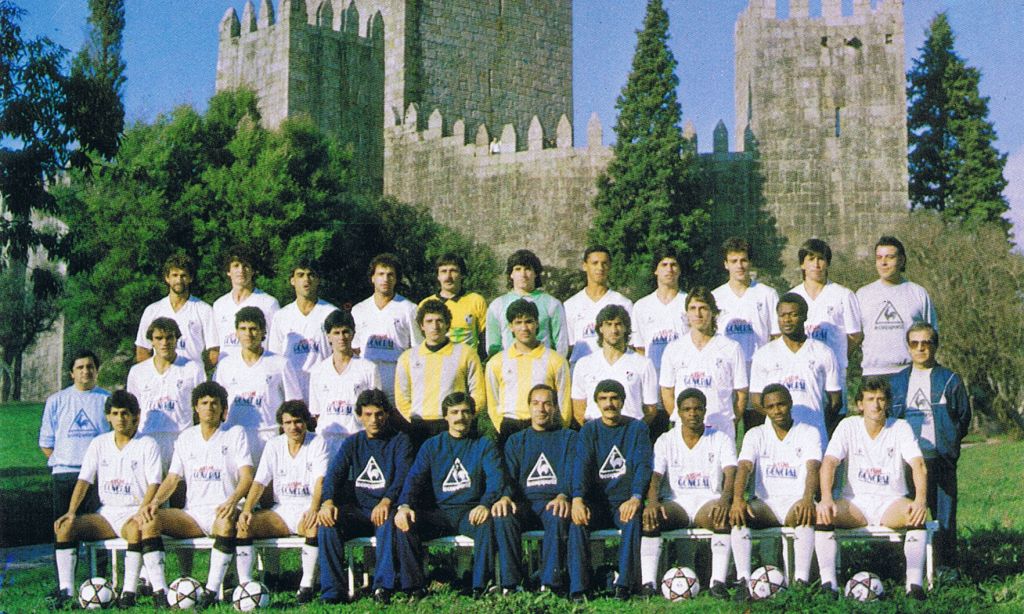 Vitoria Guimaraes had a weird season – both weak and successful, both lucky and unlucky. They barely escaped relegation this season – 14th with 33 points and only goal-difference saved the: they finished with -2, compared to Elvas -5 and Academica Coimbra -10. What a relieve at the end. 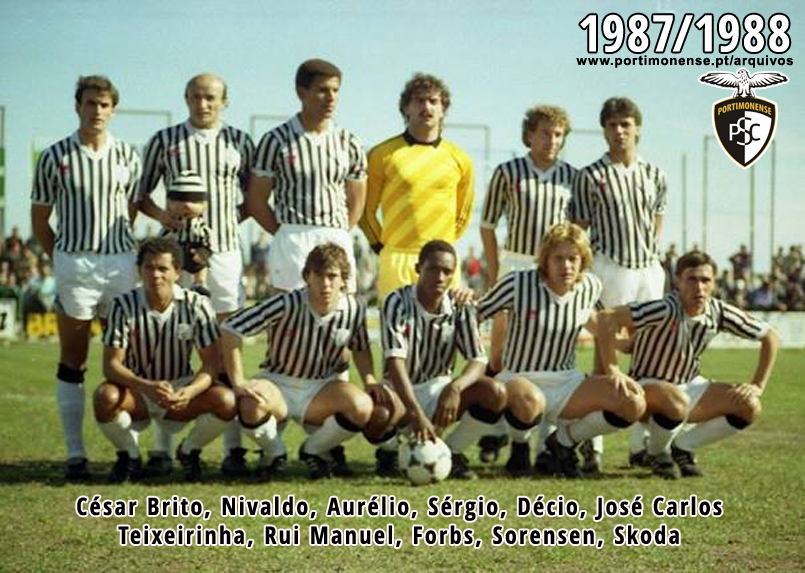 Portimonense also managed to escape relegation, but by a point – 13th with 34 points. 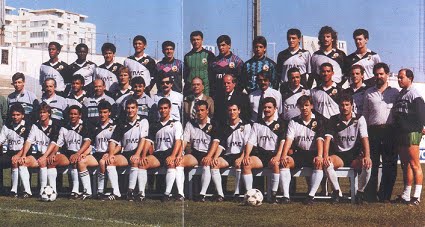 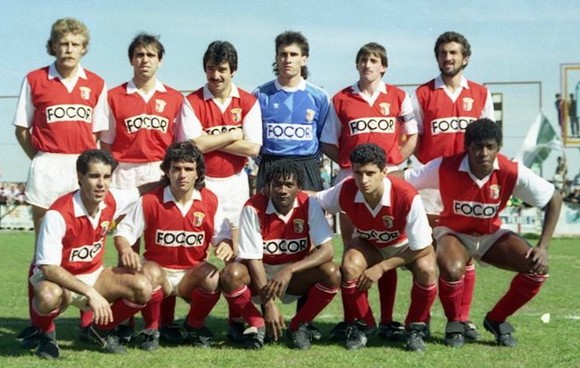 Sporting Braga – 11th at the end, but they finished also with 34 points and only better goal-difference placed them at the top of those fighting only for survival this season. Standing from left: Vitor Duarte,Vinicius,Gersinho,Hélder,Toni.Moroni
Crouching: Vitor Santos,Laureta,Kiki,João Mário,Valtinho. 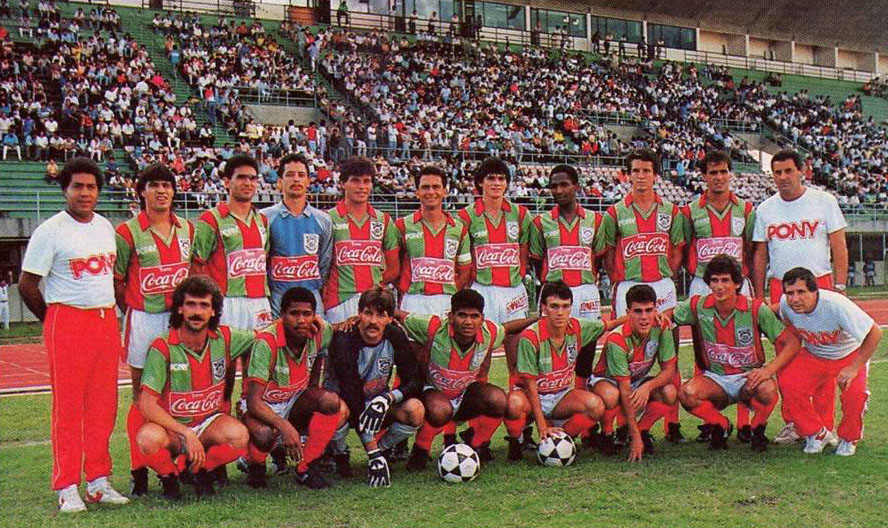 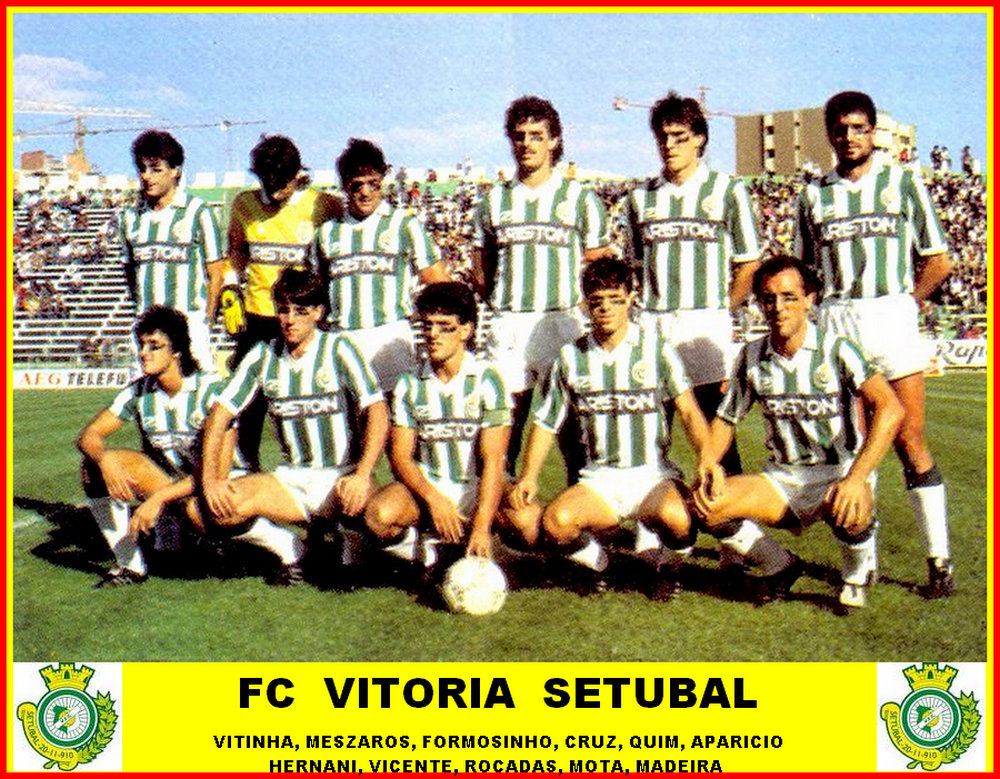 Vitoria Setubal – 8th with 40 points. Note the fashion borrowed from baseball: black grease lines under the eyes – to make opponents see true intentions. Was anybody fooled? 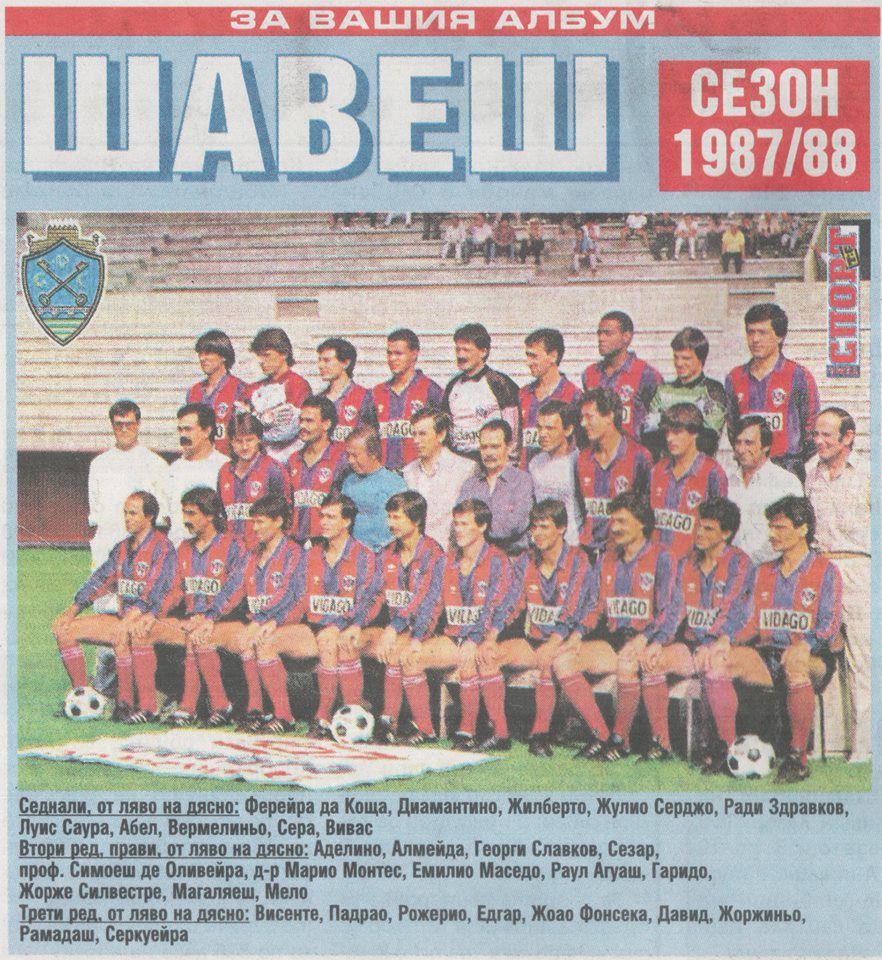 GD Chaves – 7th with 40 points. Perhaps the strongest period of the modest club, made possible by the Bulgarian invasion in Portuguese football – Portugal imported many Bulgarians at that time, which were cheap enough and affordable even to clubs with modest means. Chaves had 2 Bulgarian stars – Radoslav Zdravkov and Georgi Slavkov, both former CSKA Sofia and Bulgarian national team players. Slavkov also won the Golden Shoe, but he failed to satisfy French St. Etienne and moved to Chaves. Helped as much as he could, but it was Zdravkov who contributed most – including scoring a lot, which was not his forte. Yet, the real reason for success was the coaching stuff – learned academicians, a bit of a rarity in the European football world.
Sitting from left: Ferreira da Costa, Diamantino, Gilberto, Julio Sergio, Radoslav Zdravkov, Luis Saura, Abel, Vermelinho, Sera, Vivas.
Middle row: Adelino, Almeida, Georgi Slavkov, Cesar, Professor Simoes de Oliveira, Doctor Mario Montes, Emilio Macedo, Raul Aguas, Garrido, Jorge Silvestre, Magalaes, Melo.
Top row: Vicente, Padrao, Rogerio, Edgar, Joao Fonseca, David, Jorginho, Ramadas, Serqueira. 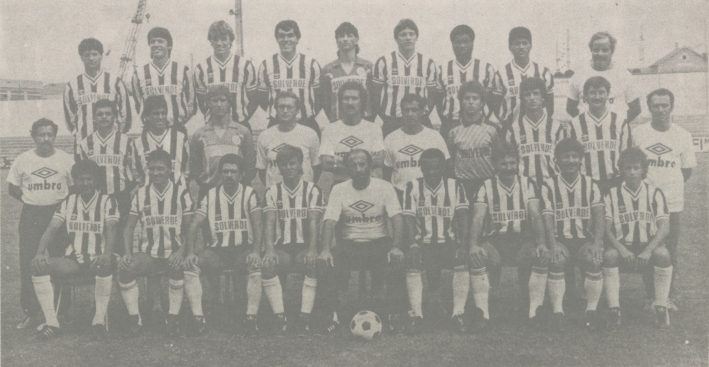 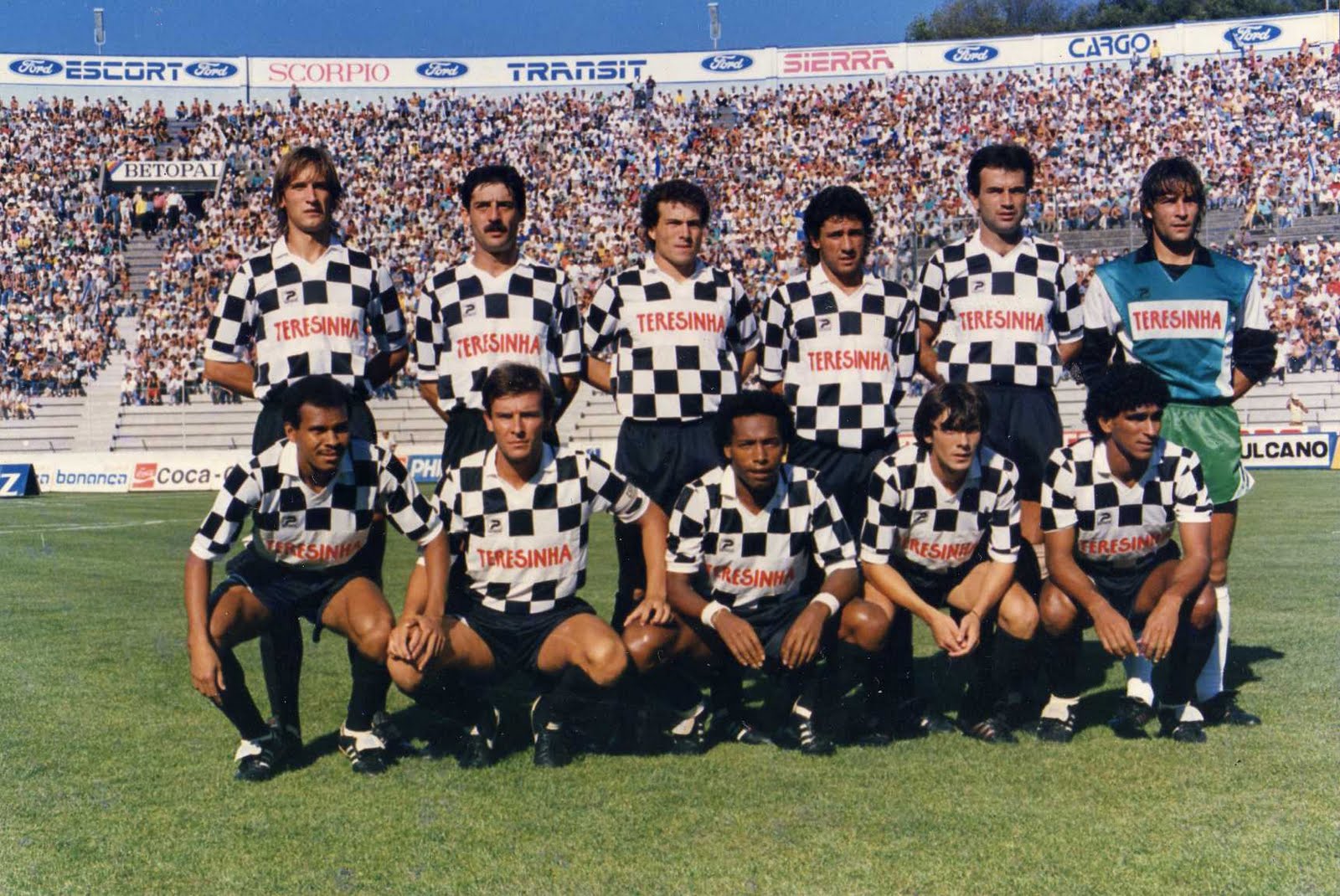 Boavista – 5th with 46 points. No matter how good were the smaller clubs, the best 5 were too strong to permit closing the gap – Boavista finished 6 points clear of Espinho and Chaves. 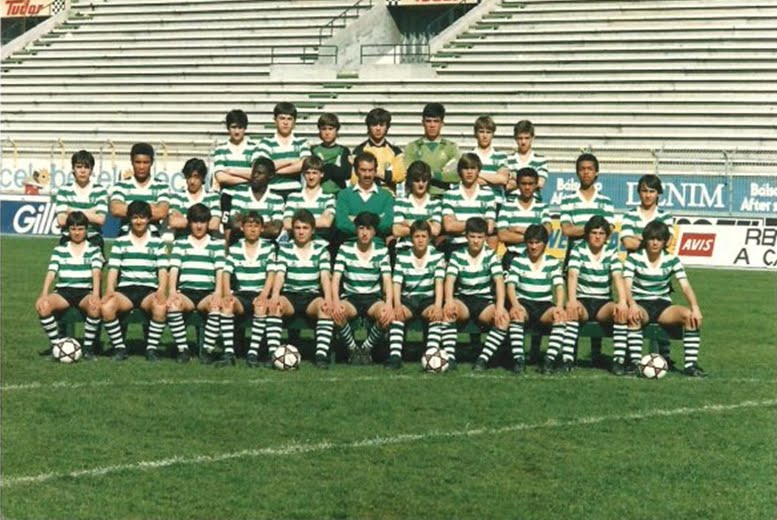 Sporting Lisbon – 4th with 47 points. Fought for medals and lost.

Belenenses – 3rd with 48 points. Were they coming back? At least the fans hoped so. 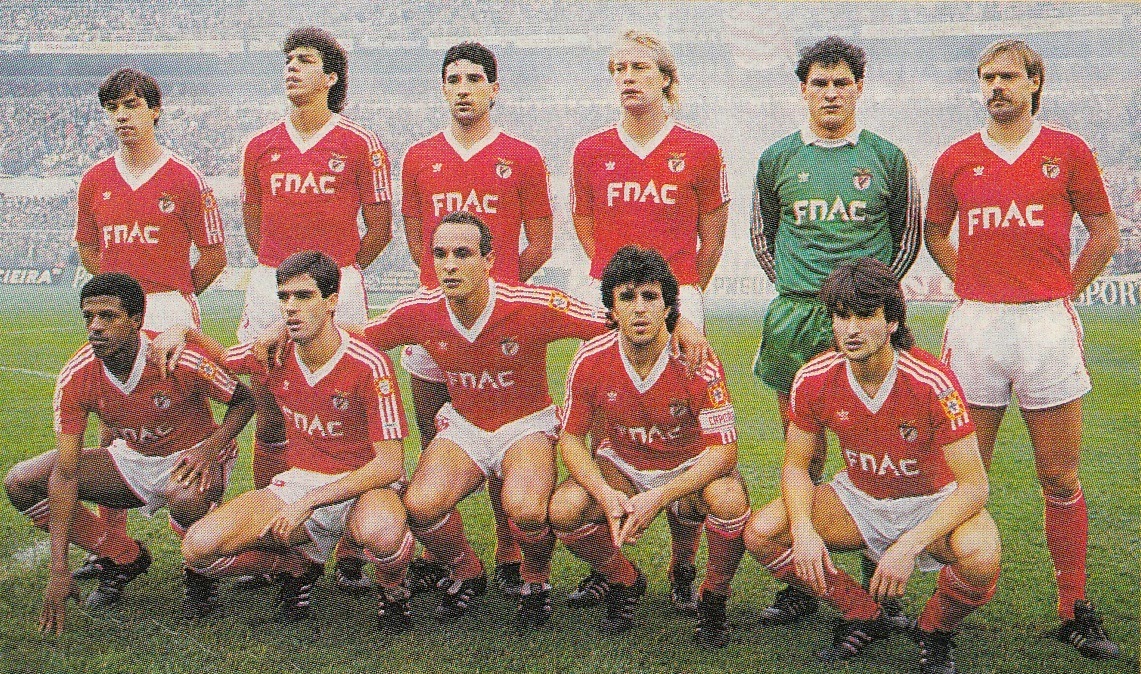 Benfica – 2nd with 51 points. Not a title contender at all and only succeeding to come ahead of Belenenses, Sporting and Boavista. Perhaps they concentrated only on the European Champions Cup -where came second too, so overall a disappointing season. Standing from left: Carlos Pereira, Carlos Mozer, Dito, Mats Magnusson, Silvino, Alvaro.
Bottom: Chiquinho, Rui Aguas, Elzo, Diamantino, Antonio Pacheco.

FC Porto ruled unrivaled – they were so strong this season, it was practically impossible to beat them. Only 1 match they lost! 29 wins and 8 ties, 88-15 goal-difference. 66 points. Best in everything: 10 wins more than Benfica’s. Best scorers by far – the 2nd best, Sporting Lisbon, scored only 62 goals. Best defensive record also by far: Benfica and Boavista allowed 25 goals in their nets. 15 points ahead of Benfica – fantastic lead, considering that Benfica came close to winning the European Champions Cup! FC Porto was splendid this season.