The Cups. Nobody paid attention to the Soviet Army Cup anymore, but it was played and it was a trophy to be won, if one wished so. Vitosha reached the final and met there Cherno more (Varna). On the road Vitosha eliminated CFCA Sredetz in the 1/8 finals – 3-0. The formula of the tournament was changed after the Soviet Army Cup became secondary tournament and benefited smaller clubs – which largely explains why Second Division teams reached the final in the recent years, Cherno more included (in the old days it was unthinkable Levski and CSKA to meet at 1/8 finals – in the 1987-88 edition 2 Third Division teams played at the ¼ finals). Anyhow, a final is a final, a trophy – a trophy, and class -class. Cherno more wanted to win, but Vitosha was only classier team – as rule of thumb, for Levski was important to beat Cherno more out of spite: since they were Army club and for years served the needs of CSKA against Levski. Old mutual hatred fuels clashes between Levski and Cherno more and they are difficult games, for Cherno more always tries to play even above their abilities. Vitosha, however, won 2-0 – two goals scored by Nasko Sirakov, who captained Vitosha this day. 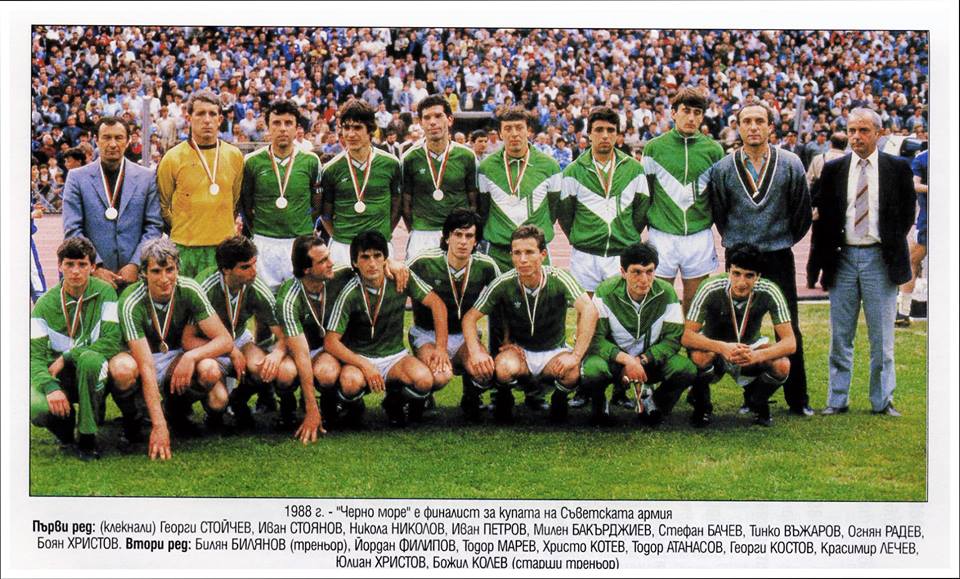 Cherno more (Varna) with the silver medals as losing finalists. Crouching from left: Georgi Stoychev, Ivan Stoyanov, Nikola Nikolov, Ivan Petrov, Milen Bakardzhiev, Stefan Bachev, Tinko Vazharov, Ognyan Radev, Boyan Christov.
Standing: Bilyal Bilyalov (at time renamed to Bilyan Bilyanov – no Turks in Bulgaria, ordered the Communist Party) assistant coach, Yordan Filipov, Todor Marev, Christo Kotev, Todor Atanassov, Georgi Kostov, Krassimir Lechev, Yulian Christov, Bozhil Kolev – coach.
To a point, too bad Cherno more lost – it would have been great if Second Division team won the Soviet Army Cup. It would have been great Cherno more to win a trophy at last (this was their second final and they lost the first in 1985 to CSKA 0-4). It would have been great Yordan Filipov to win one more trophy at 42; it would have been great Todor Marev to win a trophy at all, even at his twilight as a player. But the opponent was objectively much stronger and there was kind of justice too: Cherno more let CSKA to beat them easily in 1985, so now was payback time – another lost final, even if they made an effort to win. 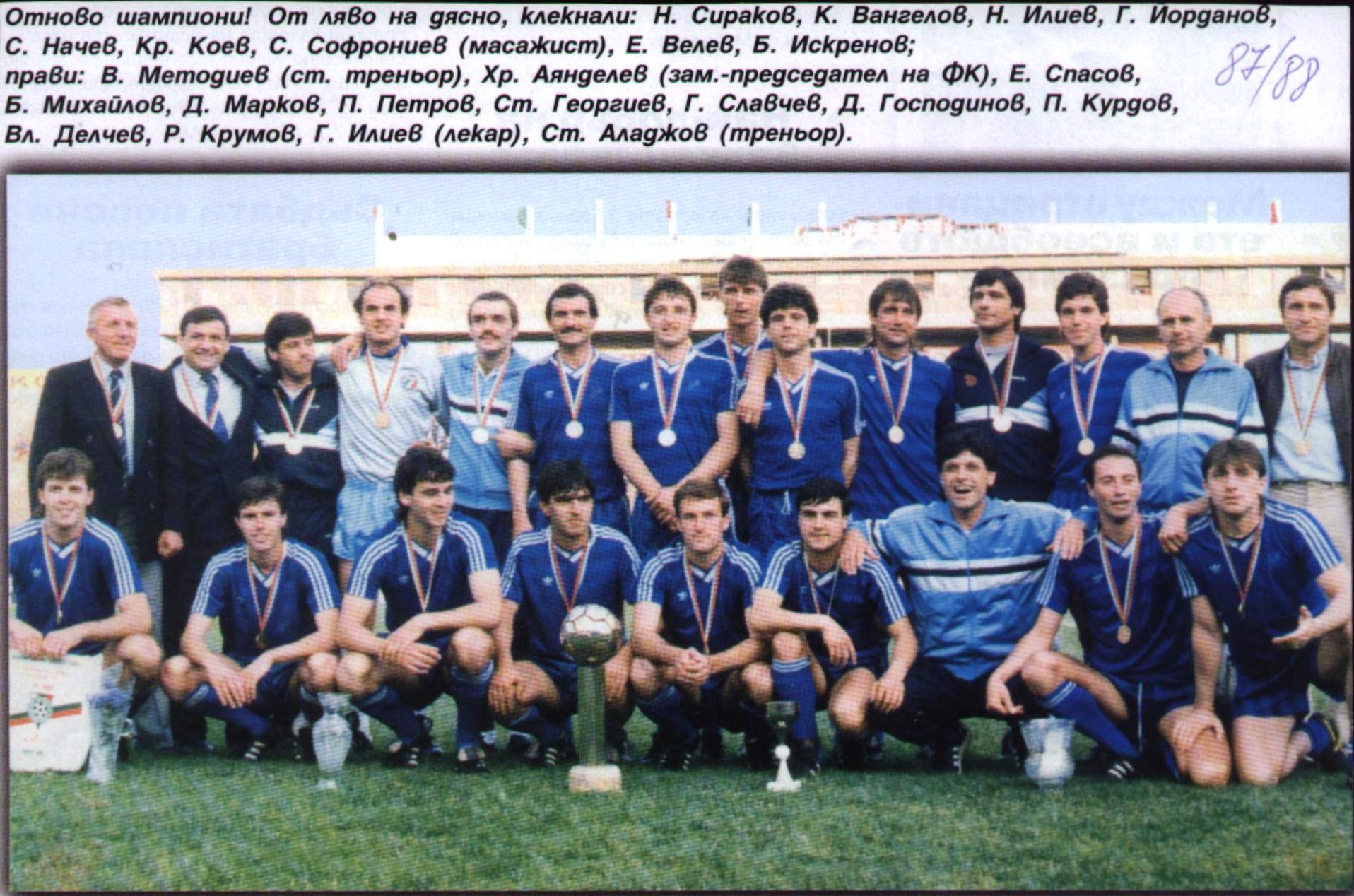 As for Vitosha (Levski) – the Soviet Army Cup did not mean much, except for making a double. This is not a photo from the final, but from the end of the season and they were posing as champions, but never mind. Crouching from left: N. Sirakov, K. Vangelov, N. Iliev, G. Yordanov, S. Nachev, Kr. Koev, S. Sofroniev – masseur, E. Velev, B. Iskrenov.
Standing: V. Metodiev – coach, Chr. Ayandelev – vice-chairman of the club, E. Spassov, B. Mikhailov, D. Markov, P. Petrov, St. Georgiev, G. Slavchev, D. Gospodinov, P. Kurdov, Vl. Delchev, R. Krumov, G. Iliev – doctor, St. Aladzhov – assistant coach.
Thus, Vitosha (Levski) won its 17th Soviet Army Cup.
The Bulgarian Cup – that was the real trophy and a good chance for Vitosha to make a treble. Against them – the eternal foe CFCA Sredetz (CSKA). And they destroyed Vitosha 4-1. Stoichkov scored an early goal, but Nikolay Iliev equalized after a few minutes. Perhaps the match was decided near the end of the first half, when Lyuboslav Penev made it 2-1 CFCA Sredetz. The ‘blues’ was unable to equalize later and in the last 5 minutes of the match Vitanov scored 2 more goals. With them or without them, the match was already decided. 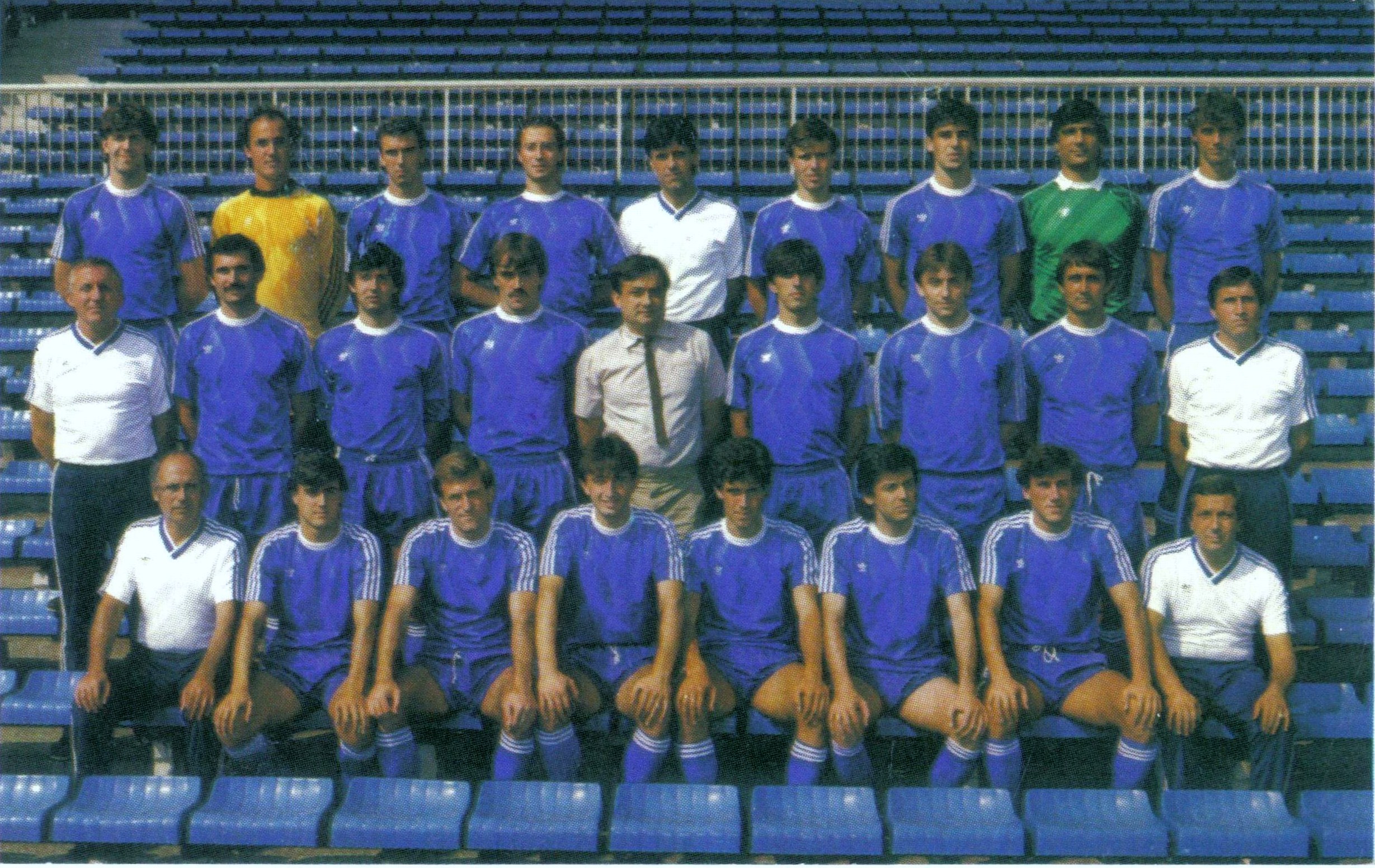 Vitosha was unable to win a treble and lost badly the Cup final in the bargain, but there was little worry about it – much more important was the victory in the championship. As it is always with great derbies, victory can go either way. A lost match, whatever what kind, is sour. Yet, the joy at the end of the season prevailed. 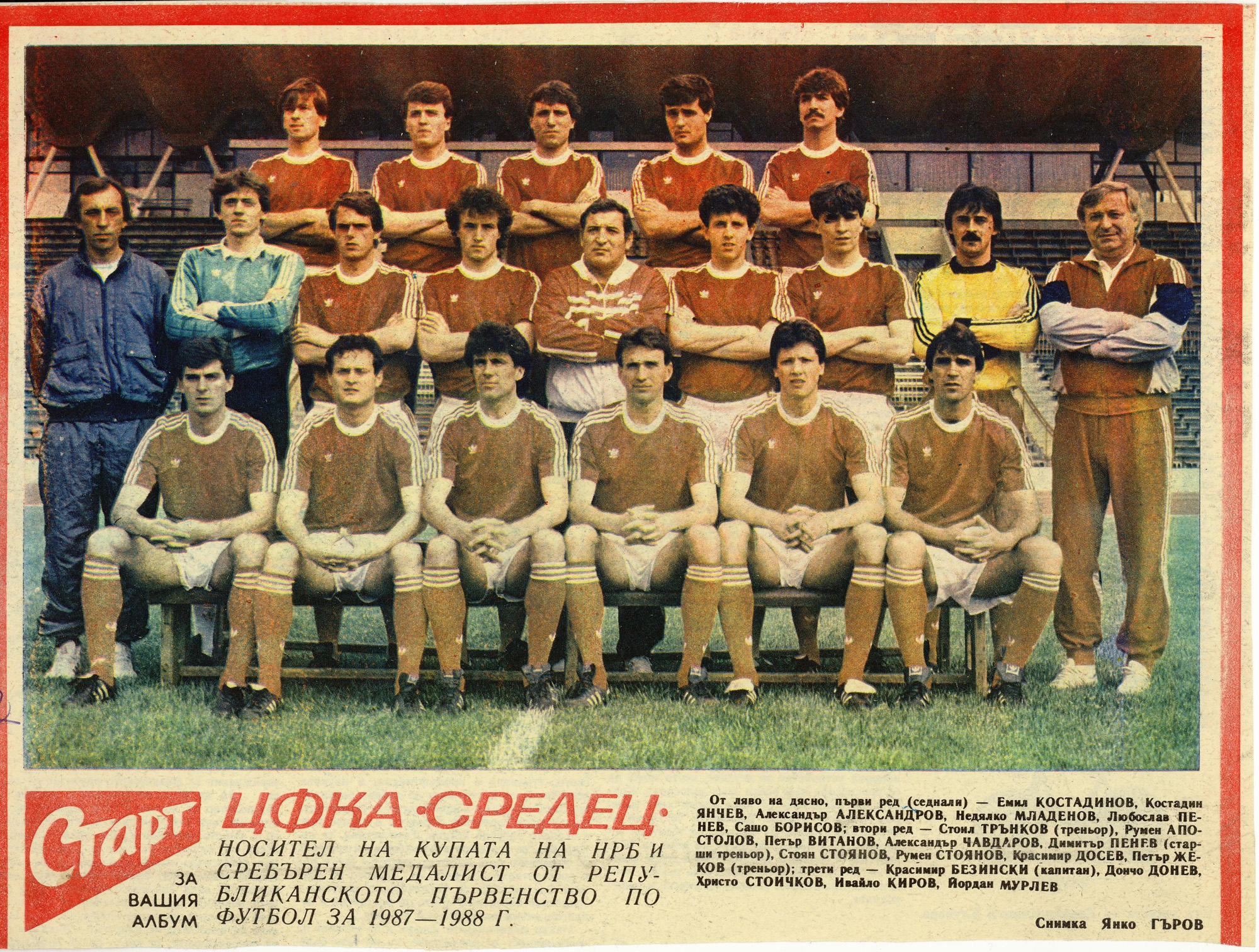 CFCA Sredetz (Sofia) won the Cup and the devastating result boosted pride. Sitting from left: Emil Kostadinov, Aleksandar Aleksandrov, Nedyalko Mladenov, Lyuboslav Penev, Sasho Borissov.
Middle row: Stoil Trankov – assistant coach, Roumen Apostolov, Petar Vitanov, Alekandar Chavdarov, Dimitar Penev – coach, Stoyan Stoyanov, Roumen Stoyanov, Krassimir Dossev, Petar Zhekov – assistant coach.
Top row: Krassimir Bezinski -captain, Doncho Donev, Christo Stoichkov, Ivaylo Kirov, Yordan Murlev.
As much as CSKA and its fans dismiss Cups and prefer to think only of championship titles, this vicory was important and sweet to them – first of all, the arch-enemy was beaten, a revenge for losses not only in this season. Second, the season ended with a trophy. Third, with the introduction of this tournament, new emphasis was put on: CSKA so far won 4 official Bulgarian Cups (5, if 1985 is counted) and Levski – 3. Since this Cup was the official national Cup, now CSKA was leading in both championship titles and Cups – before, at the times the Soviet Army Cup was the national Cup, CSKA trailed Levski. Now – they were the absolute leaders. Then again, all depends of counting… whether one starts with 1945 of starts with 1981… and in 1988 even the Federation could not make head of tale of that – both tournaments overlapped and would have been unthinkable to offend the USSR by entirely dismissing the Cup they provided. Such a limbo… but CFCA Sredetz was happy.