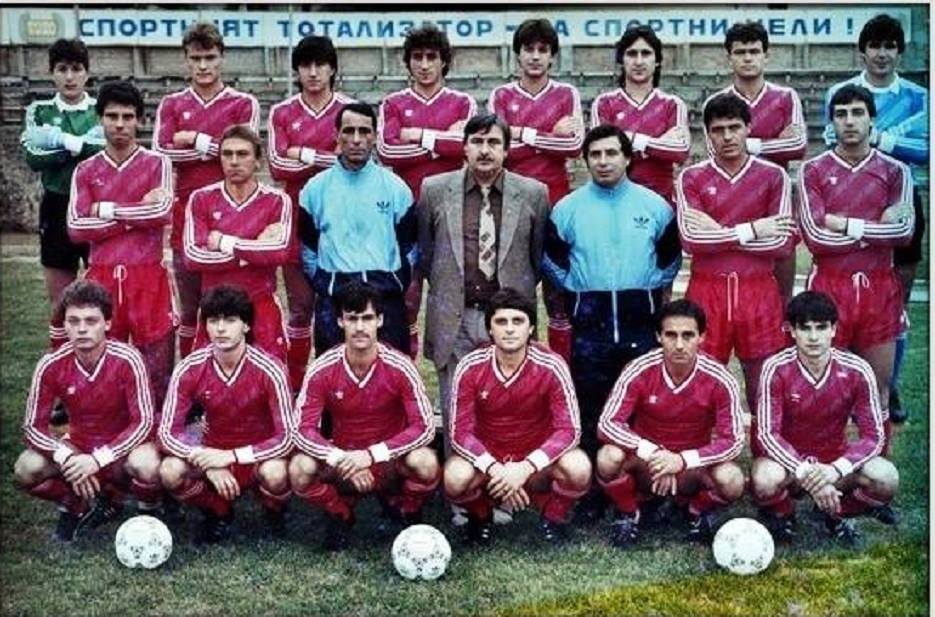 Cherveno zname (Pavlikeni) clinched first place, finishing 1 point ahead of Kom (Berkovitza). Both teams used to play in the Second Division before, but nor regularly and to a point it was surprising they were at the top now – it was expected already mentioned Septemvriyska slava (Mikhailovgrad) to win: they, presumably, were the richest club in the group, the only one coming from a regional capital and not from a small town. But, apparently ‘stunned’, they finished 7th and were not a factor at all.
Northeastern Group: 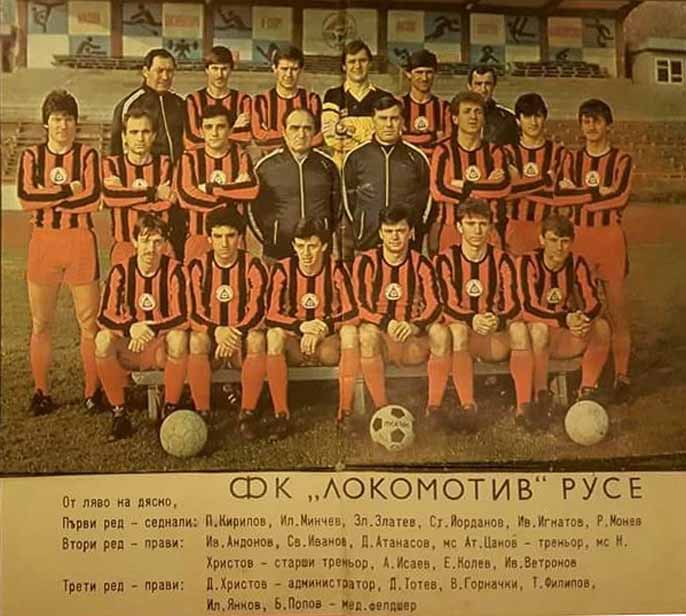 Lokomotiv (Rousse) won the battle with Dorostol (Silistra) by 4 points difference, the biggest difference a winner built this season. Like their rivals, they used to play Second Division before, quite frequently. Sitting from left: P. Kirilov, Il. Minchev, Zl. Zlatev, St. Yordanov, Iv. Ignatov, R. Monev.
Middle row: Iv. Andonov, Sv. Ivanov, D. Atanassov, At. Tzanov – assistant coach, N. Christov – coach, A. Issaev, E. Kolev, Iv. Vetronov.
Top row: D. Christov – administrator, D. Totev. V. Gornachki, T. Filipov, Il. Yankov, B. Popov – medic.
Now, Lokomotiv, the smaller second club in the city of Rousse, had a checkered history of ups and downs, mostly related to financing – on occasion they did not have a team at all, barely existing, if not entirely folding, before reemerging again. More than Second Division was hardly ever their aim, as usually was with second clubs in relatively smaller cities. But as a second club, their fate largely depended on the current situation of the ‘big’ local clubs – usually, team like Lokomotiv had a number of players discarded by the ‘big’ neighbor for getting old or something else. Such players often were good – good enough for Second Division, that is. However, recently Dunav (Rousse), the ‘big’ neighbor, had problem with talent and increasingly depended on out-of-town recruits, who had little desire to stay for long with Dunav, let alone settling in Rousse for good. The result was that Lokomotiv had not even one familiar player right now – the only big name in the team was their young coach Nikola Christov, a legend of Dunav, a prolific scorer, who even played for CSKA in the 1970s and the national team. He promoted Lokomotiv back to Second Division, but the team needed some reinforcements. The case of all Third Division winners this season, actually.